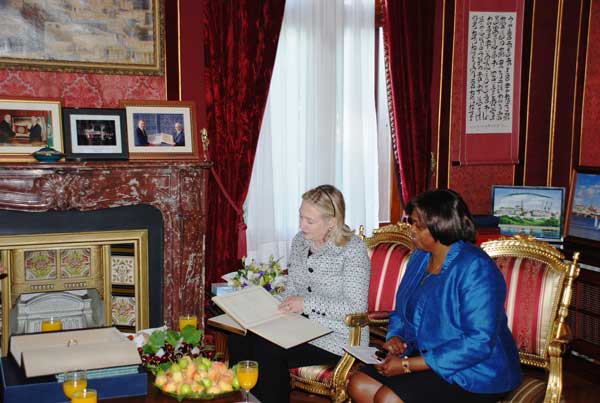 WASHINGTON (RNS) Suzan Johnson Cook, the State Department's ambassador-at-large for international religious freedom, will announce this week that she is resigning after 30 months on the job, according to two sources familiar with her office.

President Obama nominated the former Baptist minister to serve as his top adviser on protecting religious freedom around the world. When confirmed by the Senate in April 2011, she became the first woman and the first African-American in the position, which had been held by two people before her. 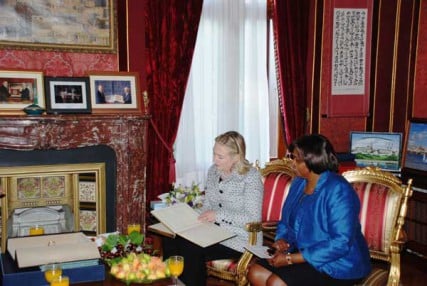 Obama had been criticized for taking too much time after his own swearing-in to nominate a religious freedom ambassador, a position created by the International Religious Freedom Act of 1998.

He first nominated Johnson Cook in June 2010, but her nomination expired in January 2011 and Obama was forced to renominate her several weeks later.

"They called Margaret Thatcher the 'Iron Lady,'" she said just after being renominated. "Change the name. It's mine now."

Obama was criticized for choosing Cook, who had strong religious credentials and ties to Bill and Hillary Clinton's political network, but scant diplomatic experience.

But she had a track record as a high-level counselor. She advised President Bill Clinton as a White House fellow on the Domestic Policy Council, and worked with the secretary of the Department of Housing and Urban Development on faith-based issues.

During her Senate confirmation hearing, Cook cited her travels to five continents. She has led interfaith delegations to Israel, Egypt, Jordan and the Caribbean.

"The front lines demand strategic action, not emotional nor reactionary tactics, but strategic, prayerful action," Cook said in 2011. "Either we deal with it now or fundamental extremists can fill the power vacuums where regions have lacked democratic institutions."

In recent months, her office has been eclipsed by the appointment of Shaun Casey, a Christian ethicist and longtime Democratic consultant, as head of the State Department's Office of Faith-based Community Initiatives, where he oversees religious engagement for Secretary John Kerry.

Cook received her doctor of ministry degree from United Theological Seminary in 1990 and spent much of her career in her native New York City, where she was senior pastor and CEO of the Bronx Christian Fellowship Baptist Church in New York City from 1996 to 2010. According to her State Department biography, she was also a chaplain with the New York City Police Department for 21 years and served on the front lines during 9/11, where she was publicized as "America's chaplain."

Sources who said she was leaving the job, who declined to be publicly named because the announcement had not been made public, said they did not know what she would do next, or who might be nominated to replace her.