A passerby stops to look at the window display at Gammarelli tailor shop in Rome. Annibale Gammarelli and six generations of his family have dressed the popes since 1798, and their store is a historic landmark in the heart of Rome just behind the Pantheon. RNS photo by Josephine McKenna
February 6, 2014
Josephine McKenna

ROME (RNS) When Pope Francis appoints 19 new cardinals at St. Peter’s Basilica at the end of February, the Vatican will be bathed in a sea of red. The newly appointed "princes of the church" will don their scarlet robes and signature silk hats for the first time as other well-dressed members of the College of Cardinals look on.

They will not be the only ones celebrating. Lorenzo Gammarelli, pictured here, said, "Several of the new cardinals have already come to see us to order their outfits for the ceremony." RNS photo by Josephine McKenna

While the new pope has adopted a more austere approach to what he wears, the Vatican’s leading tailor and other outfitters are expecting a notable spike in business when the world’s cardinals gather in Rome to welcome new members to their ranks.

Annibale Gammarelli and six generations of his family have dressed the popes since 1798, and their store is a historic landmark in the heart of Rome just behind the Pantheon.

Before former Cardinal Jorge Mario Bergoglio was elected a year ago, the renowned tailors had prepared white woolen cassocks in three sizes -- small, medium and large -- so the new pope could immediately greet the faithful on the balcony of St. Peter’s in the recognizable papal white.

The Gammarellis are also the tailor of choice for thousands of priests, bishops and cardinals from around the world.

“Several of the new cardinals have already come to see us to order their outfits for the ceremony,” said Annibale's nephew, Lorenzo Gammarelli.

The consistory, which is the first of Francis' papacy, has created a flurry of activity within the wood-paneled walls of the tiny store at what is normally a quiet time of year. “Increased demand? We hope so,” Lorenzo Gammarelli said with a smile.

The shop window is ablaze with red as a mannequin displays the cardinals’ ceremonial outfit, while a splash of red silk damask fabric is being sliced across the counter inside the front door. A handful of anonymous artisans are toiling away in the workshop upstairs to meet the approaching deadline -- one cassock can take up to three days to make, and all the work is done by hand. 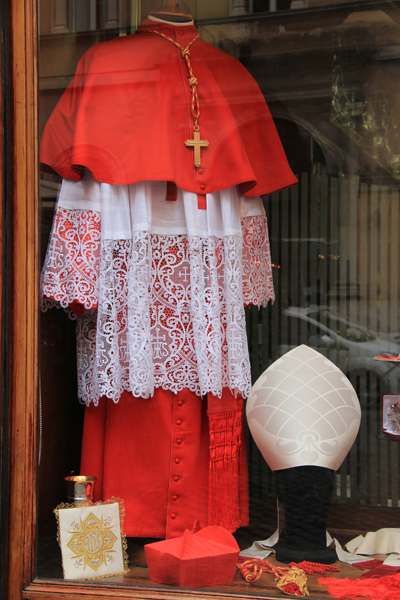 The shop window is ablaze with red as a mannequin displays the cardinals’ ceremonial outfit at Gammarelli's tailor shop in Rome. RNS photo by Josephine McKenna

“For us it’s an honor to have been working in this business as an ecclesiastical tailor since 1798,” Lorenzo Gammarelli said. “Naturally, serving the cardinals at the consistory is also a great honor.”

While there is no sign that the consistory will lack the pomp or pageantry of the past, Pope Francis has already driven home his characteristic message of humility in a personal letter sent to each of the incoming cardinals in January.

“I ask you, please, to receive this designation with a simple and humble heart. And, while you must do so with pleasure and joy, ensure that this sentiment is far from any expression of worldliness or from any form of celebration contrary to the evangelical spirit of austerity, sobriety and poverty,” the pontiff wrote.

When Bergoglio joined the College of Cardinals in 2001 as the archbishop of Buenos Aires, he reportedly had the robes of his predecessor, the late Cardinal Antonio Quarracino, altered to fit him rather than buy a new set.

Since his election last March, Francis has not only abandoned the papal apartments, but also eschewed the red shoes and ermine-trimmed crimson cape once favored by Pope Benedict XVI.

Andrea Tornielli, a veteran who follows the Vatican for the Italian daily La Stampa, said he expects the consistory ceremony to be fairly traditional but believes Pope Francis will dress simply on the day.

“I don’t believe there will be great changes in the cardinals’ clothing although it’s likely that the pope will wear his usual white outfit,” Tornielli said.

Mes Chaussettes Rouges, or My Red Socks, is the Paris firm that supplies Gammarelli with the fine white Merino wool socks worn by the pope and red socks worn by the cardinals. Partner Vincent Metzger said the company experiences a boost in sales whenever there is a papal conclave but less so with a consistory.

“The cardinals usually buy them in the store or online in advance,” Metzger said from Paris. “The outfit is not the goal of the journey.”

On the streets of the ecclesiastical fashion district in the center of Rome, the mood is somber. No one wants to criticize the much-loved Francis, who is still riding a wave of popularity, but it seems his personal style, combined with the ongoing economic crisis, is having an impact on business.

A passer-by stops to look at the window display at Gammarelli tailor shop in Rome. Annibale Gammarelli and six generations of his family have dressed the popes since 1798, and their store is a historic landmark in the heart of Rome just behind the Pantheon. RNS photo by Josephine McKenna

One store with an elaborate collection of clothing for cardinals, bishops and priests declined to speak to a reporter, while another proprietor conceded: “We are working less; the pope is a simple man.”

For the official ceremony, the new cardinals are expected to wear a red silk cassock topped with a white lace rochet and a short red cape over that. A decorative cross on a red cord will hang from their necks. At the altar, the pope will present each new cardinal with a personalized red silk zucchetto (skullcap), the classic four-cornered red hat known as a biretta and the ring that symbolizes their new role.

Apart from their vibrant outfits, cardinals also need at least one black cassock trimmed with red piping for their daily routine (or white, for those in tropical countries) but they can also opt for a full-length ferraiolo, or red cape, and accessories like Merino wool socks and hand-embroidered gloves. Most do not foot the bill themselves but rely on friends or family to pick up the tab.

Across the road from Gammarellis, Ghezzi, another Rome institution, is already gearing up for the canonization of Pope John XXIII and Pope John Paul II in April, as well as the imminent consistory.

“We have seen a small increase in demand,” says Luciano Ghezzi, who founded the business nearly 60 years ago. “As for style, each cardinal can do want he wants. But the style today is much simpler than it was in the past.”