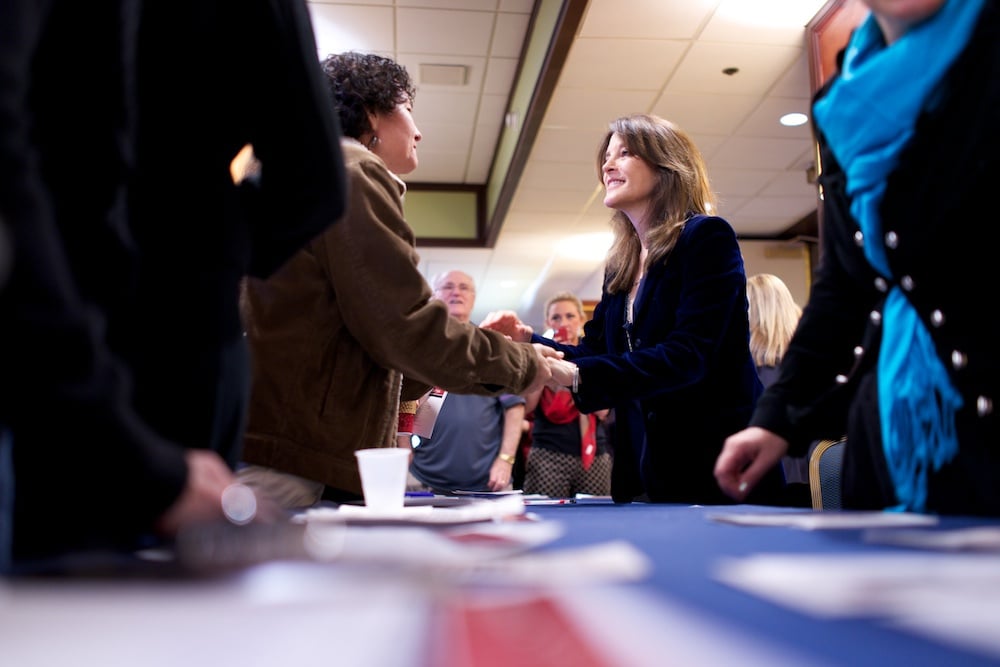 LOS ANGELES (RNS) It’s not a typical campaign for U.S. Congress, and that’s the point.

Best-selling author and spiritual lecturer Marianne Williamson closed out a campaign volunteer meeting Thursday (Feb. 6), by beckoning the crowd of about 100 people to do what she does naturally -- pray. Chatter ceased, heads bowed.

After praying for humanity and for the country, Williamson offered up, “May love prevail. And so it is.” The rapt audience replied in turn: “And so it is.”

Williamson, 61, beloved by fans (including Oprah) for her warm writings on transforming the heart and soul, is seeking to convince voters to send her to gridlocked Washington, D.C., in her quest for California’s 33rd District seat.

It’s a decision Williamson calls a “lateral move,” in keeping with her career’s trajectory, which took off after the 1992 best-selling book "A Return to Love."

With about four months before primary elections, Williamson is seeking to tap into widespread discontent and disillusionment and apply her own brand of well-packaged, transformational wisdom to stoke “a people’s movement.”

“It’s the people who have to intervene, because the political status quo is part of what has taken us to where we are,” Williamson said in an interview this week, highlighting corporate money as a primary cause for the present state of affairs. “It’s an all-hands-on-deck moment.”

Williamson launched her campaign in October. She wants to end the status quo of capitulation to corporate money in politics and encourage an engaged, loving electorate. A lifelong Democrat, Williamson registered as an Independent -- bypassing party structure in order to challenge incumbent, Rep. Henry Waxman, D-Calif. Last month Waxman announced his retirement, capping off 20 terms as the district’s representative.

With Waxman out, many people have jumped at the opportunity to represent the district, which includes some of Southern California’s toniest areas -- Malibu, Beverly Hills and Santa Monica -- populated by heavyweight Democratic fundraisers. In addition to Williamson, they include producer and director Brent Roske, a fellow Independent, along with two seasoned Democratic politicians: state Sen. Ted Lieu, and former Los Angeles controller Wendy Greuel.

Williamson’s campaign logo “Create Anew,” is emblazoned on sweatshop-free T-shirts from American Apparel and features a band of doves flying over an American flag.

Williamson’s platform gets beyond abstracts, just barely. It outlines what’s worrisome about contemporary society, from mass incarceration to climate change to health care inaccessibility, with little by way of policy proposals. For example, Williamson vows to “work closely with” supporters of the Affordable Care Act. She opposes nuclear energy and will do “everything possible” to minimize the power of pesticide makers.

But it’s not policy prescriptions that draw 43-year-old Tyrus Wilson, a waitress and artist, to support Williamson’s candidacy.

“It would be nice to have some heart in politics,” said Wilson, who attends weekly volunteer meetings for the Williamson campaign in Venice.

“I feel that she genuinely wants to heal America,” added Amy Elizabeth, a Beverly Hills-based Pilates instructor who is also a regular at Williamson’s weekly spiritual lectures at a West L.A. theater.

“She has a steep hill to climb,” said Bojarsky, who specializes in consulting to Hollywood elite, many of whom live in the 33rd District.

Williamson concedes building up a campaign is difficult, but bristles at the idea that she’s reaching beyond her orbit: She penned a book on politics in 1997, and founded Project Angel Food, a nonprofit that provides food to those affected by HIV/AIDS.

And if her candidacy draws mockery -- that of a political neophyte with grandiose ambitions -- Williamson said it’s predictable.

“If anything is naive and lightweight,” said Williamson, “it’s the traditional political conversation.”