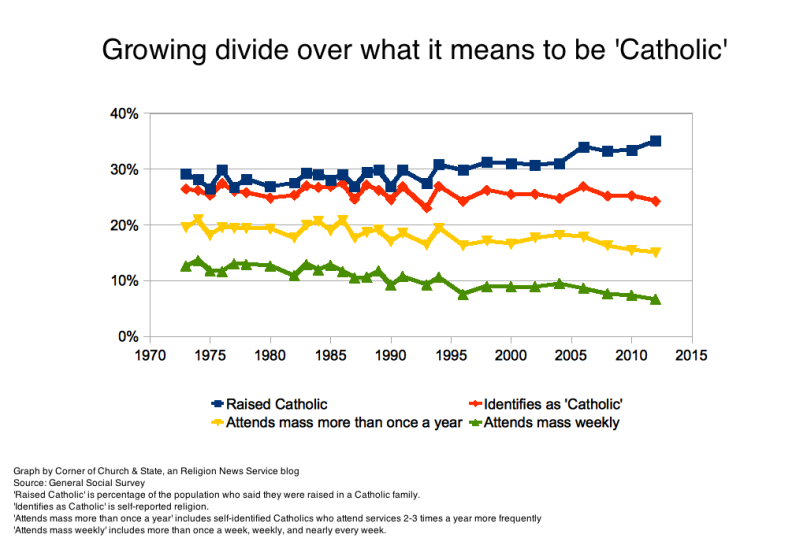 Graph of growing divide over what it means to be ‘Catholic’ in the U.S.

There is a growing divide over what it means to be Catholic in America — the number of ‘practicing Catholics’ is shrinking as the number of ‘cultural Catholics’ grows. According to the General Social Survey, there are more Americans who have left the Catholic church than there are Catholics who attend mass weekly.

A ‘cultural Catholic’ is someone who was raised Catholic but has little or no involvement in the church as an adult. In the 1970s there were relatively few cultural Catholics. Half of Catholics were ‘practicing Catholics’ who attended nearly every week. Today, Catholics who attend weekly make up just one-third of those who identify as Catholic (and one-fifth of those who were raised Catholic).

Being raised Catholic used to have a stronger hold on a person’s faith. In the 1970s, 85 percent of those who were raised Catholic identified as Catholics as adults. Today, that number has dropped to 65 percent. The 35 percent who no longer say they are Catholic are evenly split between converts (those who have joined another church or religion) and ‘nones’ (those who say they have no religion). Among those that still identify as Catholic, less than half attend mass more than once a year.

There are two likely causes for this change. The first is Vatican II. The rise in cultural Catholics occurred when those raised in a post-Vatican II church were reaching adulthood. The second possible cause are the clergy molestation scandals. Since the scandals have become mediahere has been a growing percentage who no longer claim to be Catholic or who rarely attend mass. Whether or not either of these events caused the growing gap between cultural and practicing Catholics is a topic awaiting further scrutiny by researchers. 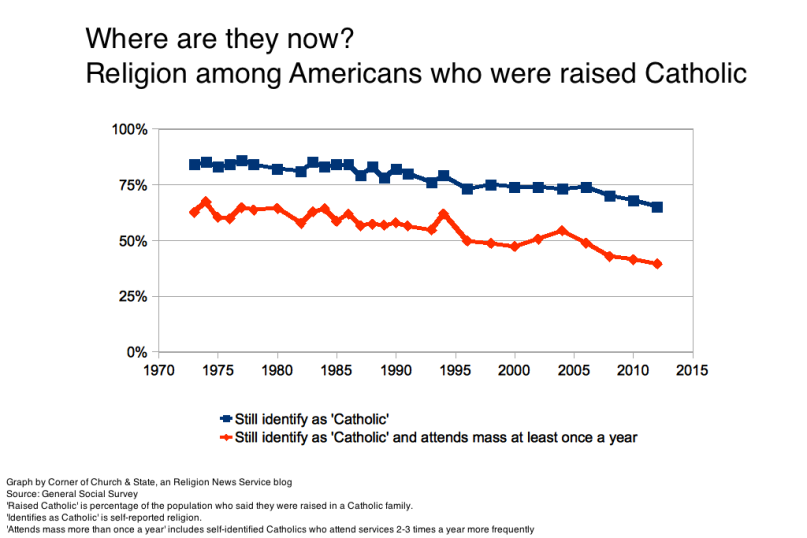 Graph showing the percentage of Americans who were raised Catholic who are still Catholic as adults.

Lingo lesson: Some use ‘cradle Catholic’ to identify those raised Catholic who remain active in the church as adults; it is often used to distinguish those raised in the faith and those who converted as adults. The term ‘cultural Catholic’ is just one term for someone who was raised Catholic but is not active in the church. Some use ‘lapsed Catholics’. There are also a other labels (albeit pejorative ones), that highlight those that attend mass only on major holidays: