‘Being Both’ author Susan Katz Miller, courtesy of the Miller.

Growing up nonreligious, my first real exposure to religion came in the form of a childhood friend being raised by a Jewish mother and a Catholic father.

At the time it seemed unusual, but today interfaith families are increasingly visible. Yet the very idea of marrying across religious lines presents a challenge to many atheists, agnostics, and nonreligious people—with some suggesting that atheists and theists may seriously struggle in dating, marrying, or raising children together.

With Valentine’s Day coming up, I spoke with Susan Katz Miller, recent author of Being Both: Embracing Two Religions in One Interfaith Family. A prolific journalist who raised her children in an interfaith community, Miller shared her thoughts on atheists, agnostics, and the nonreligious in interfaith relationships, her view that all relationships are “interfaith,” and her thoughts on nontheistic Jewish communities.

Chris Stedman: Your book addresses interfaith families, often consisting of a couple with distinct religious identities. But you also argue that all relationships are “interfaith” in a sense, as no two people believe exactly the same things. Can you say more about this?

Susan Katz Miller: Whether or not two people have the same religious or nonreligious label, they are never going to share identical beliefs, practices, culture, family history. Both partners could be Reform Jews and one could be an atheist, the other a mystic. Or both partners could be secular humanists, and one loves to celebrate a huge Christmas and the other, not so much. Or both partners could be Protestant, but one sees Jesus as the Messiah and the other sees Jesus as more of a teacher or rabbi or even as a metaphor. What we teach children in interfaith community religious education is that you cannot accurately determine anything about someone’s beliefs based on their religious label.

CS: Talk to me about atheists, agnostics, and the nonreligious in “interfaith” relationships. What are some of the particular challenges they might face, and what are some things they offer?

SKM: Most atheists, agnostics and nonreligious did not grow up as such, but came to their own decision about their own beliefs in their teen years or in adulthood. In interfaith families raising children with both religions, we make the point that every human being ultimately grows up and makes their own decisions about religious affiliations, about beliefs, about spiritual tools and practices. So whether you are raised with one religion, two religions, all religions or no religions, you have the capacity and the right—or perhaps even the responsibility—to make these decisions for yourself, and to change your beliefs at any point in your lifetime. I think it is important to have atheists, agnostics, and secular humanists acknowledged as part of the huge diversity of available beliefs and cultures.

There are, of course, many secular or cultural Jews who are atheists. But there are also a lot of secular humanists in Unitarian Universalist communities, and in various Christian denominations, and in Buddhism, and in Paganism. Interfaith families seek out the most welcoming and open-minded communities, and often those are the same communities that welcome the nonreligious also seeking community.

But there are a significant number of atheists, agnostics and nonreligious people married to people who do maintain religious affiliations, or atheist couples from two different religious cultures, so there is an important overlap between secular and interfaith communities. For atheists in “interfaith” or faith/nonreligious relationships, I think the keys to success are the same as they are in any other interfaith relationship: listen to each other, be specific about the beliefs and practices that you want to share and why, be open and tender and loving, and above all, see interfaith or faith/nonreligious bridge-building as something that is inspiring, as a form of calling, rather than as an insurmountable problem. 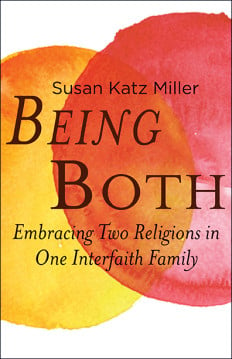 ‘Being Both’ courtesy Susan Katz Miller and Beacon Press.

Another difference is that parents raising children in intentional interfaith communities have to be open to having their children exposed to the idea of God. God is mentioned in both Jewish and Christian prayers, and for some interfaith families, belief in God is seen as important common ground. Other parents, who might be agnostic or atheist, join an interfaith family community because they want their children to have that religious literacy, the knowledge of Bible stories for instance, as part of general cultural literacy. And they assume their children will come to their own conclusions about what they believe about God, as well as what they believe about Jesus. Humanist, interfaith, UU, Quaker communities, and some other progressive religious communities share a tendency to question, to wrestle, rather than subscribing to a set theological doctrine.

CS: What are some skills that interfaith families or people with a hybrid religious identity bring to interfaith dialogue?

SKM: Because we see with more than one set of religious or cultural lenses, I think we notice both commonalities and differences more easily, and accept them more readily. We have been bridging differences and translating cultures all of our lives, day in and day out. It sounds exhausting, but for many of us, it feels natural or exhilarating. As part of an interfaith family, we know that love can prevail.