See how I loaded that headline?

Our views of euthanasia (active killing), suicide and physician-assisted dying are greatly shaped by the vocabulary of the discussion. Now, add “age” to the arguments.

But there’s no mincing words over what happened Thursday in Belgium. The parliament overwhelmingly approved a law to lift age restrictions on euthanasia and it goes to the king for signature.

It’s been legal for Belgian adults in “constant and unbearable physical or mental suffering that cannot be alleviated,” since 2002. The extension to minors adds new, required protections: The approval of three doctors, proof that the child understood the finality of euthanasia, and the parents’ approval. This resembles legislation in the Netherlands where only five children have ever euthanasia since a law without age restrictions passed there in 2002.

Do you think the Dutch/Belgian view on euthanasia, autonomy and death at any age will eventually cross to the USA? Should it?

In the USA – where actively causing someone’s death is illegal no matter his or her age or suffering — euthanasia is forbidden. However, five states allow physician assisted dying where a terminally ill adult may receive a lethal prescription but only the patient can choose to take it.

Don’t expect to see euthanasia at any age in the USA, say ethics experts. Catholic doctrine is unswervingly opposed to both euthanasia and assisted dying. And even some supporters of so-called death-with-dignity legislation stop short of calling for extending this to minors.

When the legislation passed its first vote in Belgium last fall, I asked Dr. Paul Wolpe, professor of bioethics and director of the Center for Ethics at Emory University, why it’s such a fraught topic.

“There is no topic where the issue of compassion is more split than it is around euthanasia,” said Wolpe.

One view is that “life is so precious that compassion means keeping people alive to experience whatever part of life they can for as long as possible because once it is over, it is over forever.”

The competing view, he said, is that, pain is one of great ruiners of the ability to appreciate life even in the most minor way. It removes joy or purpose. Hence, the compassionate thing when someone is intractable pain is to remove that pain.”

These contesting views have been argued since ancient days, says Wolpe. But only in modern times do we have “the ability to do this without bloodshed.” And only now is the argument beginning to revolve to a great degree “around the question of autonomy – the idea that I have a right to do what I want with my body.”

Euthanasia introduces the idea of making this decision for someone else. We have to examine how far we are willing to go in relieving someone else’s suffering.

“We already make all kinds of decisions about our children’s lives,” Wolpe pointed out.

Already, many parents are willing to let a severely damaged newborn die by withholding or withdrawing treatment when a doctor says there’s nothing that can be done.

And for adults, “when a competent adult decides his life is over, I would not cross the line of euthanasia but I would not put obstacles in that person’s path,” he said.

“But a child is different,” said Wolpe.

“We think children don’t have full facilities to make adult decisions. That is why they are considered minors. We see children make bad decisions about their lives that we think, as adults, they wouldn’t do.

“If we were to allow children to end their lives when they felt pain was great or life was intolerably difficult, we would be opening a Pandora’s box. Young children are not as future oriented, they can’t project themselves years from now in a sophisticated way,” said Wolpe.

It’s tougher once you consider an eight or 13 year old who has lived an entire life in pain and “has a much deeper awareness of what it means. The problem is, he said, once you start dividing – these kids can choose death and those kids can’t  — then you have to decide which child has ‘suffered enough.’ That’s dangerous.”

Where would you stand if it were your infant, your eight year old, your young teen, with no future but pain ahead?

Remember, here at Faith & Reason, we have a rule: All views, respectfully presented, are welcome. So bring your thoughts — and your manners. 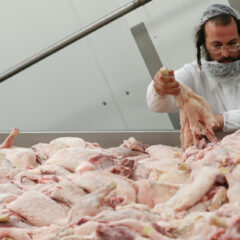