(RNS) Pastor Jamie Coots, a serpent-handling pastor and co-star of the “Snake Salvation” reality television show, died Saturday (Feb. 15) after suffering a snakebite during a church service. He was 42.

Coots, pastor of the Full Gospel Tabernacle in Jesus Name in Middlesboro, Ky., was found dead at his house around 10 p.m.

Coots had been bitten at the church and passed out there, Middlesboro Police Chief Jeff Sharpe said. Sharpe said emergency workers went to the church and to Coots’ home but his family members refused medical care. The police chief said there were no plans to press any charges in relation to Coots’ death.

Coots, whose father is also a serpent handling preacher, was a legendary figure among a small group of Pentecostal believers who practiced the so-called “signs of the gospel” found in Mark 16; among them, taking up serpents.

Serpent-handling believers say the Holy Spirit can protect them from harm while they handle venomous snakes. Some, like Coots, refused medical care — saying God would heal them. If he died, that would be God’s will.

At his church, services began with a warning: “There’s death in that box.” The warning referred to the wooden boxes, often decorated with crosses and religious symbols, that serpent handlers use to transport rattlesnakes and other venomous serpents.

In the past, serpent handers had been secretive about their worship services. Handling serpents in worship is outlawed in most states. Many states also ban possession of rattlesnakes and other venomous serpents.

Coots first attracted national attention in the mid-1990s, when he and his friend, the late John Wayne “Punkin” Brown, were featured in the best-selling book “Salvation on Sand Mountain,” which profiled serpent handlers. Brown died in 1998 from a snakebite. Coots often carried one of his friend’s snake boxes with him during services.

In 2008, Coots was arrested after Kentucky police found dozens of poisonous snakes at his home — he later got permits to own snakes in that state. Last year, Coots was arrested near Knoxville after state troopers found snakes in his car. He pled guilty to violating Tennessee’s ban on possessing venomous wildlife and received a year’s probation. 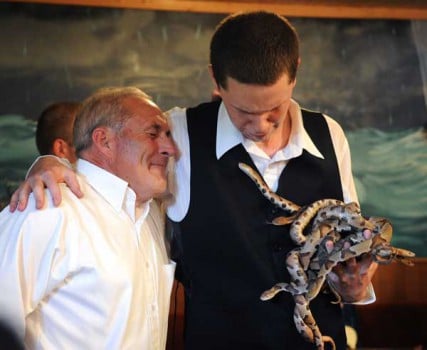 Gregory Coots, left, of Middleboro, Ky., and Andrew Hamblin, 21, pastor of Tabernacle Church of God in LaFollette, Tenn., embrace each other while Hamlin holds several copperheads during a homecoming service on May 29, 2012. Hamblin is part of a new generation of serpent handling Christians, a 100-year old faith tradition in Tennessee.

Still, he remained undaunted in practicing his faith and in spreading the word about his faith.

In the fall of 2013, he and Pastor Andrew Hamblin of Tabernacle Church of God in LaFollette, Tenn., starred in “Snake Salvation,” a reality television show on the National Geographic Channel. The show was not renewed for a second season. Hamblin was with Coots when he died.

When their show was announced, Coots said that being on television would allow him to preach about Jesus to a bigger audience.

“If one person sees it and it converts them or causes them to go to a church, then it will be worth it,” he told The Tennessean.

WATCH: A video of Jamie Coots from The Tennessean.

In recent years Coots had also taken to social media to spread his faith. On Sunday morning his Facebook page was flooded with comments from family, friends and fellow believers, mourning his death.

“Dad past away yesterday,” wrote Cody Coots, Jamie’s son. “I’m missing him so much… If anyone has anything to give to help would be greatly appreciate. RIP dad I love hope to see you on the other side.”