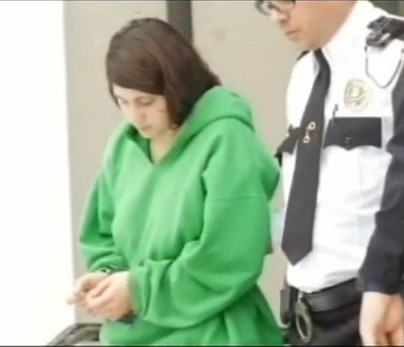 Accused killer Miranda Barbour claims to have killed a man she met on Craigslist.

(RNS) At least one Satanist leader is a nonbeliever when it comes to a Pennsylvania woman’s claims that she joined a satanic cult, then killed dozens of people over a six-year period.

Miranda Barbour, 19, accused of killing a man in November that she met on Craigslist, made national headlines last week when she told a local newspaper she killed at least 22 others. Barbour, in a jailhouse interview, told The Daily Item in Sunbury that she was sexually abused as a child, joined a satanic cult when she was 13 — and that the cult leader helped her pull the trigger on her first kill.

“There is a secular idea that ‘the devil made me do it’ that has turned into ‘satanism made me do it,'” says Lucien Greaves, spokesman for The Satanic Temple, among the largest such bodies nationwide with a few hundred members. Barbour is not among them, he said.

Federal, state and local authorities say they are looking into Barbour’s murderous claims. Tuesday, a Pennsylvania prosecutor said there had been “no verification” of additional slayings, and authorities in North Carolina, where Barbour had also lived, expressed skepticism.

Greaves told USA Today he doubts two parts of Barbour’s story — that she killed dozens of people and that she was part of a satanic cult.

Barbour is charged with one murder —  the fatal stabbing of Tony LaFerrara, 42, in November. She told The Daily Item she agreed to have sex with LaFerrara for $100. She also said she told LaFerrara, 42, that she had just turned 16.

“He told me that it was OK. If he would have said no, that he wasn’t going to go through with the arrangement, I would have let him go,” she told the newspaper. Barbour and her co-defendant husband, Elytte Barbour, 22, could face the death penalty if convicted of the murder.

Greaves says he believes Miranda Barbour wants to make a media splash. And he said she is using Satanism to distance herself from the horror of murder.

“She wants people to believe that she killed for justice sake,” Greaves said. “She has turned herself into ‘Dexter.'”

Greaves says many people connect Satanism with evil, but that it really involves individuality, the quest for knowledge and rejecting arbitrary authority.

“We don’t even believe in the devil,” he said. “Most Satanists don’t.”