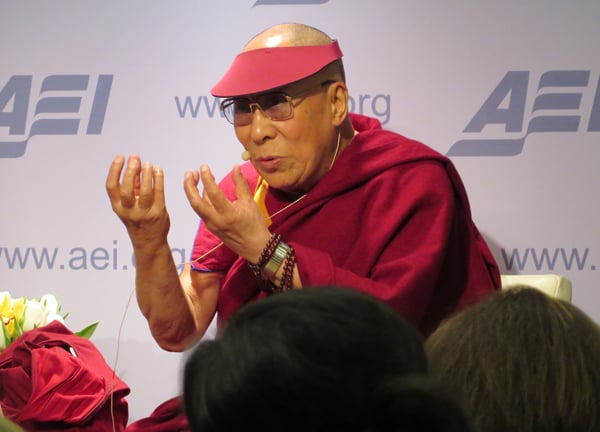 The Dalai Lama, the spiritual leader of Tibetan Buddhism, speaks to the American Enterprise Institute on Feb. 20, 2014, in Washington, D.C. The think tank, which advocates for the strengthening of free market capitalism, asked the Dalai Lama to participate in discussions on "Economics, Happiness, and the Search for a Better Life." RNS photo by Lauren Markoe
February 20, 2014
Lauren Markoe

WASHINGTON (RNS) Some of the brightest pro-business minds in the nation prodded the Dalai Lama on Thursday (Feb. 20) to offer a warm endorsement of capitalism.

But during an appearance by the spiritual leader of Tibetan Buddhism at the American Enterprise Institute, one of the world’s most stalwart and, in conservative circles, respected free enterprise think tanks, they came up short. 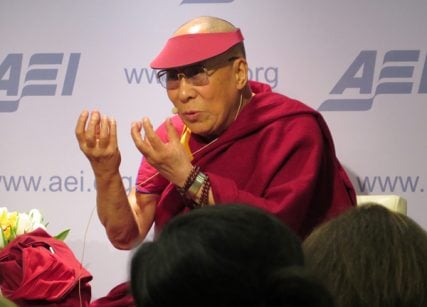 The Dalai Lama, the spiritual leader of Tibetan Buddhism, speaks to the American Enterprise Institute on Thursday (Feb. 20) in Washington, D.C. The think tank, which advocates for the strengthening of free market capitalism, asked the Dalai Lama to participate in discussions on "Economics, Happiness and the Search for a Better Life." RNS photo by Lauren Markoe

The Dalai Lama was the star participant in a morning of panels on “moral free enterprise” and “human happiness.”

Asked by AEI President Arthur Brooks and Columbia Business School Dean Glenn Hubbard whether he agrees that the free enterprise system is the most moral of economic systems, and why he thinks the U.S. is the richest nation on earth, the Dalai Lama answered in broken English with his own question: What do you mean by rich?

He went on to declare the command economy of the former Soviet Union, "failed," and then critiqued American capitalism: "At the same time, United States, capitalist country, most richest, but gap rich and poor."

Both systems, he continued, have "drawbacks," and he prescribed "more discussions, more concern for others' well being."

Then finally, the Dalai Lama said, "I myself don't know," and burst into laughter, adding, "unless I spend few years studying about world economies and become student of you."

In his opening remarks to a rapt audience of several hundred, the Dalai Lama did underscore a value that many conservatives believe is in short supply: individual responsibility.

He said the next century, unlike the last, should be one of peace. “We must create it. ... Peace only comes through our action, not through wishful thinking,” the Dalai Lama said. “Buddha cannot give you what you want. You must make effort.”

Brooks -- who was joined on the first panel by Hubbard, hedge fund founder Daniel S. Loeb and New York University business and ethics professor Jonathan Haidt -- also asked the Dalai Lama how nations could best protect private property, and how the poor could enjoy “the blessings of the free enterprise system.”

The Dalai Lama answered in general terms, repeating his call for human beings to be more compassionate and to dampen "too much greed."

In the past, the Dalai Lama has called himself a Marxist. He has also previously praised the freedoms that opening markets has brought to China, whose leadership tried to assassinate him in 1959 for his work to free Tibetans from Chinese domination.

Believed by Tibetan Buddhists to be the 14th Dalai Lama, Tenzin Gyatso was born in a poor Tibetan village and has lived most of his 78 years in exile in India, where until three years ago he was head of the Tibetan government in exile.

Since the communist invasion in 1950, China has ruled Tibet.

As Haidt noted, the Dalai Lama is greatly admired by those on the left side of the political spectrum. But the professor said he hoped the AEI event would help to "break out of the rut" of opposing narratives of the free enterprise system -- one in which it is the savior of humanity, lifting the poor out of poverty and promoting liberty, and the other in which it is the oppressor of the worker, and the ruination of the environment.

The Dalai Lama, Haidt said, could help write a third, more "nuanced" story of capitalism, where all get to share in its bounty.

But Robert Thurman, a scholar of Tibetan Buddhism at Columbia University, said the Dalai Lama isn't following anybody's script. A Buddhist and supporter of the Occupy Wall Street movement, Thurman said he's not nervous about those who might like to align themselves with the Dalai Lama to burnish their own reputations.

The Dalai Lama likes to talk to people you might not expect him to, Thurman said. He will engage with the downtrodden and leaders alike. He believes "the best kind of change comes from both ends."