ORLANDO, Fla. (RNS) The words “Christian” and “horror movie” rarely appear in the same sentence, much less in the same film’s promotional material.

Yet that’s exactly what Tim Chey, writer and director of “Final: The Rapture,” does to promote his picture in its city-by-city rollout.

As the movie’s poster promises: “When the Rapture strikes … all of hell will break loose.”

In an interview outside the Orlando, Fla., multiplex where his film is playing on a Sunday afternoon, Chey said he’s comfortable with the Christian horror movie label, or even “Christian disaster movie.”

Acknowledging that a movie theater is no substitute for a sanctuary, Chey said his purpose is “to scare the living daylights out of nonbelievers. … If it means I have to make a horror film to make it realistic to win people to Christ, then so be it.”

From church-sponsored, Halloween “Hell Houses” — designed to dramatize the wages of sin — to the best-selling “Left Behind” pulp novels and movies, evangelical Christians have had an ambivalent relationship with horror and terror in their home-grown popular culture.

The question is how far to go while serving a higher purpose.

“I can be as violent as I can, without being gratuitous,” Chey said. “Anything goes.” Well, that’s “anything” in the evangelical Christian sense; he draws the line at nudity and profanity.

But as they have with other genres that appeal to sometimes rebellious, media-savvy young people — rock music, cartoons and video games — evangelicals have shown themselves innovative in appropriating and adapting popular culture to their own ends.

The goal, the movie’s creators said, is twofold: To reach out to nonbelievers, while at the same time fostering a sense of cultural inclusion for the young of their flock.

“Final” is a modern version of the Book of Revelation, the last New Testament book that describes the world’s end after the faithful are taken up to heaven. Both as theology and narrative, the text has long been problematic for mainline Christians. Thomas Jefferson characterized it as the “ravings of a lunatic.”

“Final” imagines the apocalyptic chaos for four nonbelievers: an African-American, an Asian, a Hispanic and a white man living in Los Angeles, Tokyo, Buenos Aires and on a South Pacific island. Chey said his movie is more scarily realistic than the “Left Behind” movie, which covers the same subject, but generated a meager $4 million at the box office.

At 48, Chey is a movie-star handsome Korean-American whose resume includes the University of Southern California’s prestigious film school, a Harvard MBA and a law degree from Boston University. “Final” is his ninth film, shot for around $7 million, raised from a spectrum of investors, hedge funds to faith-based. And he may be onto something.

Hollywood seems to be rediscovering the commercial potential of films with religious, spiritual or supernatural themes. Before the Orlando screening of “Final,” previews included a number of upcoming, big-budget releases from major Hollywood studios: “Noah” (starring Russell Crowe and Anthony Hopkins), “Son of God” and “Heaven is for Real.” 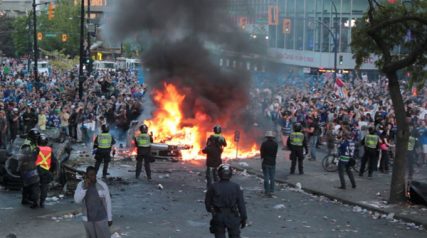 Other screens at the theater already offered similar subject matter, including “Devil’s Due” and “Gimme Shelter.”

These commercial releases, like all Hollywood fare, are aimed at the broadest audience, and intentionally go light on theology. Chey disagreed with this approach.

While it may be counterintuitive, “The stronger the message, the better the box office,” he said.

The Sun Belt suburbs are ground zero for the movie’s evangelical target audience, and the strategy appears to be working. Chey reported grosses of $5,000 per screen in the three Central Florida theaters. In Houston, where “Final” opened in early January, the team grossed close to $7,000. The film opens Friday (Feb. 21) in Fort Lauderdale, Naples and Fort Myers.

It opens in San Diego, Seattle and Portland, Ore., later this month. It will open in New York and Los Angeles, Chicago and the Midwest in April, Texas in May, and then moves to the Northeast.

Chey was late to the interview because of a morning appearance at Faith Assembly church, where two services drew about 10,000 worshippers. Megachurches are key in the marketing strategy. In Houston, Chey promoted the movie at Joel Osteen’s Lakewood Church, and sat next to the televangelist during a service.

For moviegoers with more secular, sophisticated tastes, the production values of “Final” may be lacking. But Chey estimates that 70 to 80 percent of those coming to his movie don’t go to other movies and don’t have much of a basis for comparison.

While he liked it, viewer Steven Murtha found it “a little low budget. It almost felt like a foreign film,” referring to the subtitled scenes shot outside the U.S.

But for the most part, those streaming out of the Orlando showing were ecstatic.

“I believe the Rapture is real close,” said Ella Ramsey. “I’m a Christian and I’m ready to go.”