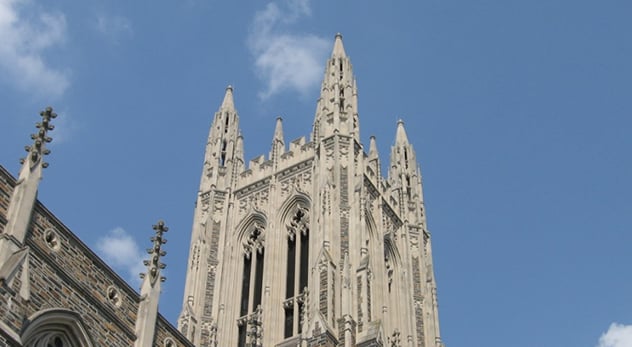 Duke Chapel against a blue sky. Richard Hays, dean of Duke Divinity School, is one of four top theologians who offer their opinions on the recent religious conscience debate. – Image courtesy of Zophos (http://bit.ly/1pt8Ym8)

The evangelical world blew up this week over the question of whether Christian business owners and individuals should refuse goods and services for same-sex weddings. Many Christian theologians, pastors, and bloggers—particularly hailing from the evangelical new-Calvinist movement—have argued the answer is yes in some cases.

In a Daily Beast column I wrote with Kirsten Powers, we argued that the Bible does not prohibit such service. Sean Davis at The Federalist blasted the column as “a masterpiece of Biblical ignorance.” He points to a passage in 1 Corinthians where the Apostle Paul addressed whether Christians should eat meat sacrificed to idols as proof that Christians should not provide service to same-sex weddings.

Russell Moore, president of the Ethics and Religious Liberty Commission (ERLC), made a similar argument and cited the same scripture in a response to our column. He reasserted his position that Christians should “sacrifice the business for the conscience” when there is an obvious deviation from Biblical standards. ERLC Director of Communications Joe Carter took to Twitter to accuse Kirsten and I of having “embarrassed” ourselves with the column.

So, is our argument really that far off base? I reached out a variety of leading theologians the evangelical world respects to get their take.  They uniformly found the use of 1 Corinthians in this case to be a misapplication.

David Garland is professor of Christian Scriptures and dean at Baylor University’s Truett Seminary and author of the Baker Exegetical commentary on 1 Corinthians. He said that he thought using this passage 1 Corinthians to justify refusing service for a same-sex marriage is difficult to square with the text, especially when you consider the entire context of the passage:

Paul’s argument actually goes from chapter 8 through ten. In chapter 9, the emphasis is on how to ultimately win unbelievers. The argument here is actually about giving up one’s right out of love for others and the sake of the faith. The goal in 8 and 9 is answering the question, ‘How do you win people over?’

When asked what he thought Paul would say to the Christian church on these issues, Garland replied, “I think Paul would say, ‘How can you witness to someone whom you will not serve?’ That doesn’t mean you condone, but you can serve without condoning.”

Next, I spoke to Scot McKnight, professor of New Testament at Northern Seminary and author of several commentaries and books. He characterized Moore’s column as “uncharacteristically elliptical” and said the 1 Corinthians passage is about not engaging in behaviors that might cause a weaker Christian to sin.

“Paul would be saying to the photographer don’t photograph if it would make a weaker brother or sister to fall into the sin of same-sex relationships,” McKnight said.

Craig Blomberg, distinguished professor of New Testament at Denver Seminary and author of numerous books, including the NIV Application Commentary on 1 Corinthians, agreed with McKnight’s analysis of this passage:

“The issue in this passage is what to do when another Christian tells you that an action you’re involved in is a problem for them,” Blomberg said.” To apply to a cake-baking situation, you’d need a weaker brother saying that if they saw you selling cake for a gay wedding, they were going to not only bake a cake but go commit some sin. Somewhere in the world of 7 billion people, there might be someone like that. But I don’t think so.”

In his book, The Moral Vision of the New Testament, Hays argued that the church should not support or bless gay unions—even lifelong, monogamous ones. When I asked him about whether or not he thinks it’s okay for a Christian to refuse to bake a cake for a gay or lesbian person who was getting married, he responded:

“Jesus was condemned by the scribes and Pharisees for associating with people of whose conduct they disapproved. The charge of eating and drinking with them tells us that Jesus’ enemies did regard him as complicit in their behavior. But he did it anyway,” Hays said. “I worry that the people who can’t bake a cake for people are putting themselves inside the bubble of Pharisaism. I just can’t go there.”

And what of those vendors who refuse services to same-sex couples but turn a blind eye to other kinds of unbiblical weddings? Should we be concerned about the apparent double standards of our brothers and sisters?

“Do the people involved regularly inquire about such things? If not, why would you change things just because someone happened to volunteer the information that they are gay and this is for a wedding,” he said. “I try to look for consistency of application no matter what principle you’re following. Whatever principle you’re applying for heterosexuals who you may not approve of, you should do the same.”

McKnight agrees: “There is a fair charge of hypocrisy since it concerns itself with only one kind of sin.” 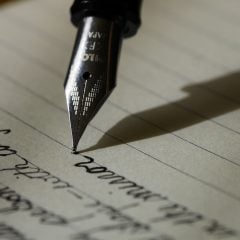 News
Why some preachers rely on holy ghostwriters and other pulpit helps
Follow us on Facebook!
Submit your photos to RNS