(RNS) Bill Gothard, an Illinois-based advocate for home schooling and conservative dress who warned against rock music and debt, has been placed on administrative leave after allegations of sexually harassing women who worked at his ministry and failing to report child abuse cases.

Gothard’s Institute in Basic Life Principles was once a popular gathering spot for thousands of Christian families, including the Duggar family from TLC’s “19 Kids and Counting.” Gothard’s Advanced Training Institute conferences were also popular among devotees of the Quiverfull movement, who promote large families and eschew birth control.

He’s also rubbed shoulders with Republican luminaries. He and former presidential candidate Mike Huckabee were photographed at a campaign lunch together; former Georgia Gov. Sonny Perdue spoke at one of Gothard’s conferences; and Sarah Palin, when she was a small town mayor in Alaska, attended his International Association of Character Cities conferences and declared Wasilla among Gothard’s “Cities of Character.”

In a statement posted Thursday (Feb. 27), board chairman Billy Boring told World magazine: “After completion of the review, the board will respond at an appropriate time, and in a biblical manner.” Until then, the statement said, Gothard “will not be involved in the operations of the ministry. The board of directors will be prayerfully appointing interim leadership.”

Gothard is 79 and single.

The allegations against Gothard dovetail with financial woes. In recent years, IBLP’s net revenue has dropped significantly, and the ministry is losing money. In 2009, it reported a net income loss of $1 million. It lost $4.1 million in 2011, and $3.5 million in 2012, according to its most recently available tax forms. Its net assets dropped from $92 million in 2010 to $81 million in 2012.

Since it started as a class at Gothard’s alma mater, Wheaton College, in 1961, more than 2.5 million people have gone through his “basic seminar” training on authority, success and other issues. IBLP held 504 seminars in 2010, but that number dropped to fewer than 50 in 2012.

The financial decline came around the same time that the whistle-blowing website Recovering Grace was formed in 2011. A string of allegations has been posted on the website, including one alleging Gothard molested a woman who was underage in the early 1990s. Four articles allege Gothard engaged in sexual harassment, and four articles allege his failure to report child abuse to Child Protective Services. 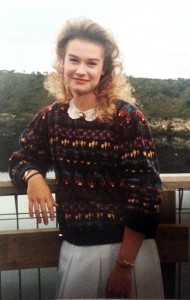 Gretchen Swearingen, who goes by her middle name “Charlotte,” wrote on the website that Gothard requested she come work for him in 1992 at IBLP’s headquarters in Oakbrook, Ill., when she was 16. During her time there, she said Gothard would play footsie with her and hold her hand. Photo courtesy of Gretchen Swearingen

Calls placed to IBLP Thursday and Friday were not immediately returned.

Gretchen Swearingen, who goes by her middle name “Charlotte,” wrote on the website that Gothard requested she come work for him in 1992 at IBLP’s headquarters in Oak Brook, Ill., when she was 16. During her time there, she said Gothard would play footsie with her and hold her hand. At one point, she said, he had coordinated a ride from the airport for them to be together. “That’s when he first put his hand between my legs and felt me all the way up,” she wrote.

Now 38, she said the statute of limitations has expired, leaving her unable to sue. She said she told her mother, who told her that she was lying, so Swearingen assumed there was nothing she could do.

“No one was there when the molestation was happening,” she said in an interview. “I never had the guts to say anything. I thought if my mother didn’t believe me, who would? You’re not to bring home false witness against someone at headquarters.”

She said that she and her mother have reconciled since she wrote her story.

Swearingen said she reported her story to the Hinsdale (Ill.) Police Department a week ago. A police spokesman said no investigation has been opened at this time.

“It’s not about revenge, not about suing him or taking him to court,” she said. “It’s about my healing and giving other people voices.”

Gothard would create an emotional bond with several women during counseling, said Rachel Frost, who also worked at IBLP’s headquarters when she was 16.

“There was a very common grooming pattern of creating emotional bonds and physical affirmations, the footsie, the leg rubs, the stroking of the hair, the constant comments on physical appearance,” she said.

She also wrote about her experience on the Recovering Grace website.

Julie Terrell, another woman who worked at IBLP’s headquarters, said Gothard sexually harassed her when she worked there in 1998. But before stories were posted at Recovering Grace, she never thought to say anything.

One woman behind the Recovering Grace website, who declined to be named because she did not want to hurt the reputation of her husband who is a pastor, said 34 women told the website they had been sexually harassed; four women alleged molestation. She said she refers anyone whose story is within the statute of limitations to the police.

IBLP is not the only institution in more conservative evangelical circles currently under scrutiny.

Last year, another prominent home-schooling leader, Doug Phillips, stepped down from his ministry that shut down after he acknowledged an extramarital relationship. The New Republic recently published a piece on Patrick Henry College, a school popular among home-schooling families, suggesting that the college had failed to report sexual abuse. In a statement, the college took issue with some of the allegations made in the piece.

Earlier this month, Bob Jones University, which started popular curricula for home-schooling families, fired and then rehired an independent firm to investigate sex abuse reports just one month before the group planned to release its 13-month review findings.