“I didn’t [watch it]. I’m not very interested in that kind of discussion because it’s between two people who will not change their minds. I don’t think that’s a real discussion.”

De Waal isn’t afraid to speak his mind, but he is certainly interested in real discussions. The author of many books—his most recent being The Bonobo and the Atheist: In Search of Humanism Among the Primates—de Waal is an outspoken proponent of humanism and the importance of empathy.

Next week de Waal will speak at an event sponsored by the Yale Humanist Community. In advance of his talk at Yale, I spoke with de Waal about the Nye-Ham debate, why he is critical of the idea that we have “selfish genes,” and what nonreligious people can learn from religion.

Chris Stedman: In his debate with Bill Nye, Ken Ham said that without the biblical divine origin story we’re “just animals” and suggested that this position undermines human dignity. What do you think about the view that we’re “just animals”? What can we learn about our moral nature from looking at other animals?

FDW: People who say that view undermines human dignity obviously have a low opinion of animals, which I don’t share at all. It’s perfectly fine to be associated with dolphins or elephants or chimpanzees.

In my view, and that’s basically the Darwinian biological view, there is complete continuity between us and other animals. As far as we know, the human brain has no parts that are not present in a chimpanzee brain. It has no processes that are new. Basically, it’s a bigger brain—three times bigger than a chimpanzee’s—but it’s not a different brain, and as a result we are not fundamentally different. Intelligence and morality and politics and culture; those are the things that are mentioned as uniquely human. But in all those areas you can put question marks and say, “Well, primates have this, or elephants have that,” and it all connects in a way.

CS: In Our Inner Ape, you describe human morality as being “firmly anchored in the social emotions, with empathy at its core.” Can you say more about the importance of empathy?

FDW: I think the two pillars of human morality are empathy and compassion on the one hand, and reciprocity, justice, and fairness on the other. I don’t think we can even imagine a moral system without those components. That doesn’t mean that they are sufficient—I see empathy and compassion in other animals, and I see reciprocity and even a sense of fairness in other animals. But I would not necessarily say that chimpanzees have morality in the way we do because they don’t try to justify rules, for example. There are certain elements missing.

All mammals evolved the neural circuitry for empathy. But people sometimes forget that, even though empathy is automatically activated, it is also quite selective. It’s biased towards individuals who are similar and familiar. So we have trouble empathizing with strangers, and even more with enemies.

CS: You are very critical of what you call “Veneer theory,” which has been connected to Richard Dawkins’s work in The Selfish Gene. Why?

FDW: Veneer theory was very popular in the ‘70s and ‘80s. It’s basically the standpoint that we are not really nice—that we don’t have any altruistic tendencies and, if people are nice, they’re probably putting up a show to get your money or to get something from you because we have selfish genes and we’re only out for ourselves. Dawkins literally said that altruism doesn’t come naturally to us, and a quote by Michael Ghiselin was repeated over and over in the literature: “Scratch an altruist and watch a hypocrite bleed.”

I’ve always protested against that view. I thought it was total nonsense because I think there’s genuine kindness, concern, and empathy going on in humans and other animals.

That view began to disappear around the year 2000 because neuroscientists were saying empathy activates our brains, and economists were saying that we’re actually much more cooperative and altruistic than you would expect, and anthropologists were playing the ultimatum game all over the world and finding that humans like fairness, and as a primatologist I was saying, “Well, actually sympathy and empathy are not uniquely human.” And so the whole Veneer theory—a very cynical view of humans being purely dog-eat-dog and competitive—which was at one time very popular and accepted, began to crumble, and has now disappeared from view, as if it has been permanently erased.

CS: Do you think that humanism can fill the role that religion has played, and still does play, when it comes to questions about human nature and morality?

FDW: You would hope so. In my book I struggled with the idea of how society would look without religion in the traditional sense. Since we don’t have societies that are completely nonreligious, I don’t think we have the answer. So we need to be modest in that regard. A reduced role of religion is of course already happening in much of the world. But a complete elimination of religious practices and religion? That’s a question. What would happen then? 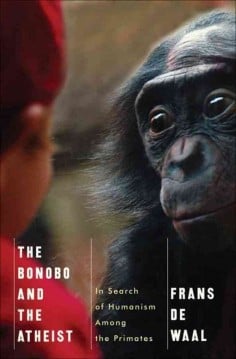 ‘The Bonobo and the Atheist’ by Frans de Waal.

There are theories about why moralizing religions arose. In Big Gods, Ara Norenzayan argues that when societies got very big—much bigger than a monkey troop or a chimpanzee community—we couldn’t maintain our moral system without some sort of supernatural supervision. In a small human group of 100 or 200 people, everyone keeps an eye on everybody. That’s how you can keep a moral system, because your reputation will be damaged if you don’t behave in a particular way.

But when you get societies of several thousands or millions, that whole system is going to collapse. You cannot maintain that—and the argument is that at that point religion became necessary to keep everyone on the same set of standards by having a God who looked over you from everywhere. So now you’re asking, “Can we do it without God?” Then the question is, “Do we need to put something in its place? Something else that is equally effective? Does that exist and what would that be?” So that’s the question at this phase, but I think it’s possible.

CS: What do you think the nonreligious can learn from how religion has considered and addressed morality?

FDW: Religion provides two things that are not necessarily tied to the belief in the supernatural: community and narrative. Rituals are part of community building, and religion is great at building community. Religion also provides narratives. It doesn’t just say you need to do this in your life; it explains how Jesus did it or how somebody else did it. It has a story to tell about why you might want to behave like that. It has a narrative that’s more than just a philosophical justification—it offers emotional justification.

Those are two elements that don’t require a God, that somehow need to be mimicked if you want to replace religion with something else. I do think humans have all the basic inclinations and the capacities that are necessary to be moral without God, so I’m not personally convinced that we need God for morality. But you need to have the other elements in place. Without them, I don’t think it’s going to happen. 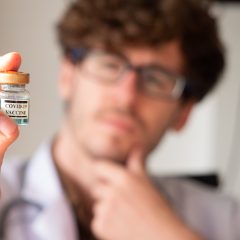