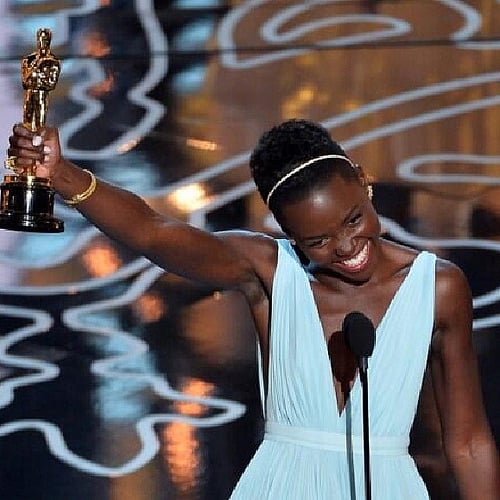 A triumphant Lupita Nyong’o – Photo by carbonfibreme via Flickr (http://bit.ly/NoaaZt)

In so many ways, Oscar Sunday is like my Christmas. I anticipate it for months, act as the only family enforcer of tradition, research until my fingers are numb so I can make sure I stay on top of the family Oscar pool for another year. (Ahem.) And then today — the morning after — is like the letdown of December 26th: the realization that there are 364 days between you and the next awards ceremony; the understanding that Channing Tatum will probably never host the Oscars (he was not on point last night, sadly); the slowly-dawning truth that another Academy Awards has passed you by without ever being invited to grace the red carpet. Sometimes, life is really hard.

But thank God for the Oscar thinkpiece, which can save us from our misery for at least another day or two. There have already been a million written between last night and this morning, and I don’t aim to contribute anything too terribly long or overinvolved, because even though the Oscars matter for our culture, this isn’t the Ukraine or Arizona or Venezuela. But I do want to look at three different acceptance speeches and try to understand what they tell us and why they matter.

Speaking of the Ukraine and Venezuela, though, the first acceptance speech of the night was also one of the better ones I’ve seen in a long time. Any acceptance speech worth its salt will do these three things really well:

1. Thank the wide circle of people it took to get the winner on to that stage, at that moment.

2. Attest to the importance of the story behind the film that got them there.

3. Transcend the moment. This usually means somehow invoking the narrative of the world at large in a way that is relevant to that person’s being on that stage, but there are plenty of other ways to do it.

And this is just what Jared Leto did. Inspiring millions of women (and some men?) across America to finally just go for the ombré look, Leto took the stage in a white tuxedo jacket, black pants, and the cutest little red bow tie you ever did see. Leto came under fire for his Golden Globes acceptance speech, in which he didn’t mention AIDS at all and instead made jokes about how painful the hair removal process had been.

Last night, he seemed to have learned his lesson. He started by telling a sweet story about his mother, “a teenage girl who was pregnant with her second child. She was a high school dropout and a single mom, but somehow she managed to make a better life for herself and her children.” Leto remembered those in the Ukraine and Venezuelan who “struggle to make your dreams happen and live the impossible.” And he ended by dedicating the award to the 36 million people who lost their battle with AIDS, and to those “who have ever felt injustice because of who you are and who you love.”

Leto’s was an important speech for a number of reasons, but mainly because he finally got that the award wasn’t just about him, as any Oscar or Golden Globe is never just about the person who takes it home. Without the millions and millions of people who died of AIDS, there would be no story to tell. Without his mother’s independent spirit and commitment to her sons, there would be no Jared Leto. And without the freedom people of privilege enjoy to pursue their dreams, there would be no celebration of those who do it well.

So in his head-scratcher of an acceptance speech (Best Actor, Dallas Buyers Club), Matthew McConaughey thanked God, “who has graced me with opportunities that I know are not of my hand.” And that’s cool, on the one hand! If you believe that God has given you gifts to use in the service of art, then by all means, your gratitude should be first and foremost to Him. The language here that is a little tricky for me is when any artist, actor, author, or person of extreme wealth associates the opportunities that have brought them wealth with the activity of God. This isn’t to say that it is bad to be wealthy and a person of faith, or even that God doesn’t have anything to do with opening certain doors for certain people…but the goal of God’s work is never that I, or anyone, should be wealthy or privileged. So I hear McConaughey and understand that what he wants is simply to give thanks to the God who is guiding his life, but I wince just a little at the presumptions that sit just under the surface of his comments.

He also, in excessively McConaughey-esque fashion, went on at length about his dad eating gumbo in heaven, gave a heartfelt thanks to his wife and children, and said his own hero was himself in ten years. It’s a sentiment at once narcissistic and charmingly, strivingly humble — the best and the worst of Hollywood on display. But McConaughey finished his speech in the MOST McConaughey way possible, which covers a multitude of sins:

Finally, we have the inimitable Lupita Nyong’o. She was favored for a win last night only very slightly more than Jennifer Lawrence, and while I haven’t yet seen 12 Years a Slave (although I plan to rectify that mistake tonight), from all I’ve heard, Lupita deserved the win. The Screen Actors Guild, Independent Spirit Award, and numerous others agreed before Lupita walked onstage last night to accept her Best Supporting Actress trophy.

The applause was uproarious when Christoph Waltz announced Lupita Nyong’o’s win. Everyone, but everyone, was on her side. Liza Minnelli hugged her, John Travolta tried to hug her (thank God he didn’t try to say her name), Brad Pitt gave her a congratulatory peck on the cheek, Steve McQueen looked like he wanted to pick her up and spin her.

“It doesn’t escape me for one moment that so much joy in my life is thanks to so much pain in someone else’s,” Nyong’o said. About Steve McQueen: “You charge everything you fashion with the breath of your own spirit…This has been the joy of my life. I’m certain that the dead are standing about you and watching and they’re grateful and so am I.” She was overcome with emotion in the way that so many actors would be to be there, especially first-time winners, and that fountain of hopefulness is one of the best things an actor can bring to Hollywood.

“When I look down at this golden statue, may it remind me and every little child that no matter where you’re from, your dreams are valid.” Simply transcendent.

News
Biblical wax museum rewards seekers of kitsch and true conviction
Beliefs
Oscars and rape culture: It can’t wait
Culture
A Christian case for “Magic Mike”
Beliefs
“Going Clear:” Scientology’s coverup efforts against the HBO documentary
Ethics
2015 Oscars fashion: Lupita, Gwyneth, and more!
© Copyright 2020, Religion News Service. All rights reserved. Use of and/or registration on any portion of this site constitutes acceptance of our User Agreement and Privacy Policy, Privacy Statement and Cookie Notice. The material on this site may not be reproduced, distributed, transmitted, cached or otherwise used, except with the prior written permission of Religion News Service.