NEW YORK (RNS) Cardinal Timothy Dolan said Sunday (March 9) that Pope Francis is asking the Catholic Church to look at the possibility of recognizing civil unions for gay couples, although the archbishop of New York said that he would be “uncomfortable” if the church embraced that position. 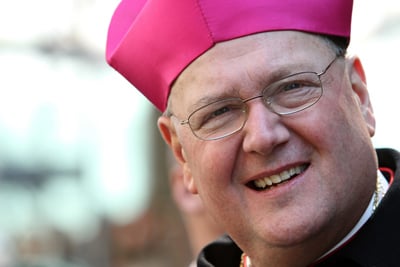 Cardinal Timothy Dolan said Pope Francis is asking the Catholic Church to look at the possibility of recognizing civil unions for gay couples, although the archbishop of New York said that he would be “uncomfortable” if the church embraced that position. RNS photo by Gregory A. Shemitz

The Italian newspaper Corriere della Sera last week published an interview with the pope in which Francis reiterated the church’s teaching that marriage “is between a man and a woman” while acknowledging that governments want to adopt civil unions for gay couples and others to allow for economic and health benefits, for example.

Francis said the churches in various countries must account for those reasons when formulating public policy positions. “We must consider different cases and evaluate each particular case,” he said.

It was the first time a pope had ever held out the possibility of the church accepting some legal arrangement for same-sex couples, and the remarks prompted a wave of stories, some indicating that the pope had endorsed civil unions or was even signaling an acceptance of gay marriage.

The Vatican quickly clarified that Francis was speaking in general terms and that people “should not try to read more into the pope’s words than what has been stated.”

Asked about civil unions on Sunday (March 9) on NBC’s “Meet the Press,” Dolan said Francis was telling Catholics that “we need to think about that and look into it and see the reasons that have driven” the public to accept them.

“It wasn’t as if he came out and approved them,” said Dolan, the nation’s most prominent Catholic bishop and the former president of the U.S. Conference of Catholic Bishops. “But Francis was instead saying, ‘Rather than quickly condemn them … let’s just ask the questions as to why that has appealed to certain people.’”

When host David Gregory asked Dolan if accepting civil unions would make him “uncomfortable,” Dolan said it would because it could “water down” the traditional religious view of marriage.

When he was still Cardinal Jorge Bergoglio of Buenos Aires, Francis reportedly tried to negotiate with the Argentine government over the legalization of gay marriage and signaled he would be open to civil unions as an alternative. A number of bishops around the world have said civil unions could be acceptable alternatives to same-sex marriage.

But the issue has special resonance in the U.S., where the fight against gay marriage — and any recognition of same-sex relationships — has been a prominent marker for Catholic culture warriors.

In the “Meet the Press” interview, Dolan addressed concerns that Francis was alienating Catholic conservatives who are often the most loyal Mass-goers and some of the biggest donors to the church. The cardinal said he sees “a little angst” but has not found “a lot of massive discontent.”