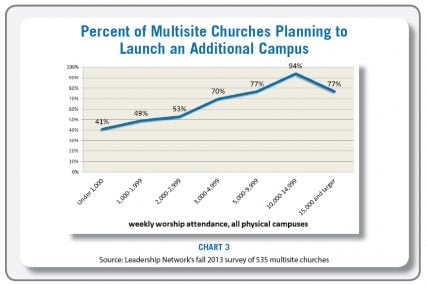 (RNS) The vast majority of multisite churches are growing, according to a new study, and they are seeing more involvement from lay people and newcomers after they open an additional location.

Nearly one in 10 U.S. Protestants attends a congregation with multiple campuses, according to findings released Tuesday (March 11) in the “Leadership Network/Generis Multisite Church Scorecard.”

The report cites new data from the National Congregations Study, which found there were 8,000 multisite churches in the U.S. in 2012 — up from 5,000 in 2010 — including churches with more than one gathering on the same campus. Churches that have created worship space in a separate setting now exist in almost every state, several Canadian provinces and dozens of other countries.

Multisite churches typically operate with a main campus headed by the senior minister and one or more satellite locations. In some settings, attendees at the satellite location watch the same sermon that’s beamed in from the central location but have their own dedicated on-site pastor, music or small group meetings. 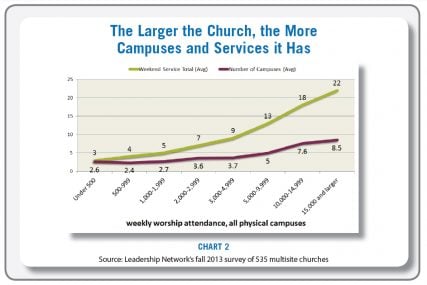 “The Larger the Church, the More Campuses and Services it Has” graphic courtesy of 2014 Leadership Network

The scorecard examined 535 responses to a survey of multisite churches that had created worship space in a separate setting.

Although megachurches (congregations with 2,000 or more weekly attendees) were pioneers of the multisite concept, churches with as few as 50 people and as many as 15,000 have tried this approach, said Warren Bird, director of research at Leadership Network, a Dallas-based church think tank.

Multisite is also an international phenomenon: One-third of the congregations on Bird’s list of international megachurches are multisite.

The report points out some of the challenges of juggling more than one campus for worship. Researchers found in 2010 that one in 10 multisite churches they surveyed had closed a location.

In this new survey, some said rented space in public schools — popular options for multisite churches — are “one of the toughest places to launch” an additional site. 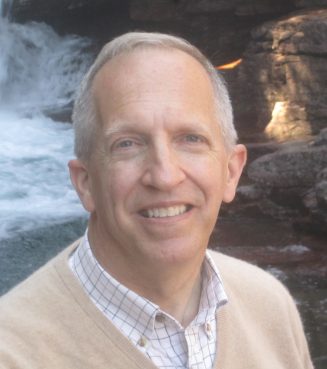 “I can only guess that the climate of churches renting public facilities is getting more and more difficult with the number of school boards that are declining to rent either on Sundays or to religious groups on the increase,” Bird said.

Jim Sheppard, CEO of Generis, an Atlanta-based consulting firm that sponsored the report, warned that it is important to have a “good, sound contract” in whatever location a church picks to set up a temporary worship space.

“If your initial location is a public school, don’t over estimate the relationship,” he wrote. “People can change, politics can get involved and you might be forced out sooner than expected.” 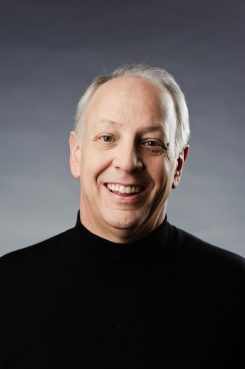 Jim Sheppard, CEO of Generis, an Atlanta-based consulting firm, warned that it is important to have a “good, sound contract” in whatever location a church may set up a temporary worship space. Photo courtesy of Generis

Multisite church leaders report that they are finding a greater percentage of “unchurched” people in their new locations than at the original location.

“Historically, a church’s greatest impact on the community is in its early years, and so the same thing is happening with a new campus,” Bird said.

Both independent congregations and those affiliated with denominations are embracing the multisite concept. Some regional denominational groups, including the United Methodists, consider mergers and other multisite options as part of their revitalization strategies.

“One of them is vibrant but needs facilities,” Sheppard said of some merging congregations in a webinar about the report. “The other one lacks vibrancy but has facilities.”