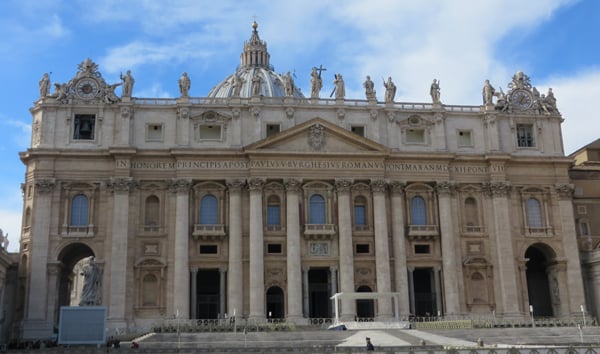 VATICAN CITY (RNS) A sting inside Vatican City aimed at nabbing the mystery buyer of more than $55,000 in cocaine that was hidden inside 14 condoms was foiled, leaving law enforcement officials searching for the source of a leak.

St. Peter's Basilica at the Vatican in Rome in February 2014. RNS photo by David Gibson

The shipment of 340 grams (around 12 ounces) of liquid cocaine was hidden inside a shipment of cushions from an unspecified South American country to the Vatican via Germany, authorities said.

Customs officials at the airport in Leipzig, Germany, discovered the drugs hidden inside the package addressed to the Vatican Post Office. The package did not specify a recipient, meaning any of the city-state's 800 residents could have picked it up on request.

Germany alerted Vatican officials who set up the sting operation to arrest whoever claimed the package, but nobody claimed it. German officials said they believed the buyer was tipped off, though there was no indication whether the tip came from Germany, within the Vatican, or elsewhere.

The Vatican's chief spokesman, the Rev. Federico Lombardi, confirmed that law enforcement officials at the Vatican cooperated with German police, but did not comment further. The investigation remains open.