Happy Monday. Here are 10 stories to watch this week. 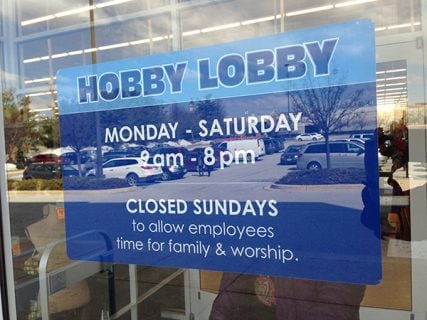 All Hobby Lobby stores are closed on Sundays and customers can easily learn why. RNS photo by Cathy Lynn Grossman

1. The Supreme Court will hear arguments tomorrow for two cases involving faith-based business owners challenging Obamacare’s mandate that businesses provide its employees with free birth control. Here’s a primer from RNS and a quick 5 Q/A from Pew to get you started.

Read about the Christian family behind the craft store chain, including Cathy Grossman’s piece on son Steve Green and the WSJ’s piece on father and founder David Green (subscription required). Or you can read about the vocally religious justices.

3. Pope Francis tapped members, including victims and an equal number of women and men, of his new commission on sex abuse. In unrelated news but also Vatican-connected news, German customs officials intercepted a shipment of cocaine destined for the Vatican.

4. In Hollywood, ABC Family nixed a pilot titled “Alice in Arabia” after drawing complaints from Muslim advocacy groups that feared the show would reinforce negative stereotypes. Meanwhile, a movie titled “God’s Not Dead” that includes a “Duck Dynasty” star performed well in the box office, earning $8.56 million. Also, the big “Noah” film comes out on Friday.

5. A federal judge ruled Michigan’s ban on same-sex marriage unconstitutional. An appeals court reinstated the state’s ban, but not before several hundred same-sex couples got married.

6. Uganda said it has lost some $6 million in U.S. aid because of its new anti-gay law. Meanwhile, the U.S. is sending troops to Uganda to help track down Lord’s Resistance Army leader Joseph Kony.

7. The number of foreign children adopted by U.S. parents dropped 18 percent last year to its lowest level since 1992.

9. The president of Russia’s republic of Chechnya inaugurated a $10 million mosque in an Arab village in Israel.

10. From RNS: A new report suggests that just 2 percent of England’s adult population attends the Church of England. That’s down from 1.6 million Sunday worshippers in 1968. Also, Germany published a new guide for Jewish tourists.

Bonus: Gorgeous wedding photos alert: Over the weekend, Archbishop of Canterbury Justin Welby presided at the wedding of his daughter Katharine, who has written about her struggle with depression.

Double bonus: Pope Francis received a toy dinosaur from the grandson of the President of the Republic of Malta.