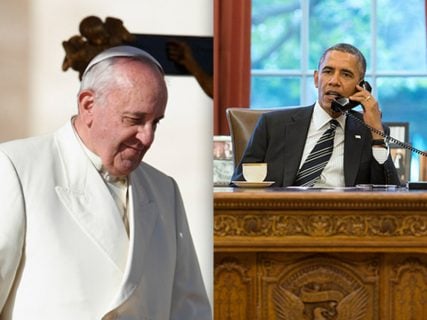 Left, Pope Francis passes a crucifix as he walks down steps during his general audience in St. Peter’s Square at the Vatican on Dec. 4, 2013. Photo by Paul Haring, courtesy of Catholic News Service. Right, President Barack Obama talks with President Hassan Rouhani of Iran during a phone call in the Oval Office on Sept. 27, 2013. (Official White House Photo by Pete Souza)

ROME (RNS) President Obama is to meet Pope Francis for the first time next week (March 27) as Obama wraps up a European tour, a high-profile encounter between two major world leaders that appears to carry especially high stakes from the U.S. perspective.

The White House and the American bishops have been at loggerheads for years on a range of culture war issues, and on Tuesday, just two days before the Vatican meeting, the U.S. Supreme Court will hear oral arguments on the contraception mandate that has sparked fierce opposition from the U.S. hierarchy.

But American and Vatican officials say the talks may disappoint those hoping for fireworks, and that the summit is going to focus on collaboration much more than conflict.

One reason is that the two men have a lot in common. Moreover, neither side wants to derail the chances for greater cooperation at a time of global volatility.

“I have to believe in this kind of high-level meeting, it’s not about making anybody feel bad,” Ken Hackett, the U.S. ambassador to the Holy See, said in a recent interview in his office here.

Hackett, the longtime head of Catholic Relief Services, has friends in the hierarchy and ties to both parties in Washington. He was seen as a smart pick when Obama nominated him as the new Vatican ambassador last year.

U.S. Ambassador to the Holy See Ken Hackett, second from left, and his wife, Joan, greet U.S. Secretary of State John Kerry as he arrives at the Chief of Mission Residence during a visit to Vatican City and Rome on January 14, 2014. Photo courtesy of U.S. State Department.

Hackett said there’s no doubt that Francis and Obama differ on issues like abortion rights and gay marriage. But neither he nor Vatican officials expect those wedges to dominate the discussions, nor would either camp want them to sidetrack the meeting.

“I think the president will say that we have principled differences on many issues,” Hackett said when asked about the hot-button topics. “But let’s focus on where we find convergences, areas of agreement.”

He added: “I don’t believe the pope and president will be arguing about why the church doesn’t change its position on abortion, because it ain’t going to happen. So it’s not going to be engaged.”

Instead, the talks are likely to be governed by two other realities. The first is that Francis, the first pope from Latin America, has clearly signaled that he wants the Catholic Church’s public witness to focus less on culture war issues and more on addressing income inequality and helping the poor and society’s outcasts — which dovetails with Obama’s priorities.

“In the past, you had mutual respect and collaboration on important issues” between the Vatican and Washington, said Joshua DuBois, former head of the White House’s faith-based office and author of a recent book about his spiritual advice to the president.

“But I think for the first time you have a sense that at a high level the priorities are the same — and that’s new.”

The convergences were already clear after Secretary of State John Kerry met his Vatican counterpart in January. The meeting was substantive and positive, and ran well over the allotted time, sources say. Both sides also portrayed it as a sign of a more engaged relationship.

“This was as comprehensive a conversation as I’ve had with any secretary of state or foreign minister in the course of my tenure, and I think, happily, we agreed on an enormous amount of things that we can cooperate on,” Kerry said at the time. 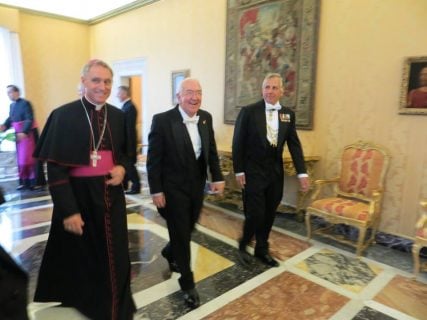 Hackett and other U.S. officials said they expect Francis and Obama to build on that start by discussing shared concerns like poverty and immigration, as well as the fight against human trafficking and on behalf of international religious freedom.

Obama made that last topic the centerpiece of his talk at the National Prayer Breakfast last month, though that irked conservatives who see his support for gay rights and contraception coverage undermining religious freedom at home.

“The narrow discussion of religious freedom that takes place in the United States is important, but when you look at it from the worldwide perspective there are much more important religious freedom issues that are looming,” he said. “And I think that’s where the president put his energy.”

A second factor shaping the upcoming Vatican meeting is the sudden eruption of violence in global hot spots.

Obama has been drawn somewhat reluctantly into the foreign policy arena while he would prefer to focus on domestic issues at home. Francis, meanwhile, has sought to push the Vatican back onto the world stage as a voice for peace and a diplomatic player that can play a concrete role as well as providing moral and spiritual guidance.

“It’s definitely something that the church under Francis … appears to be engaging in a more formidable way,” said Hackett. The ambassador noted in particular the Vatican’s role in the Syrian peace talks in Switzerland (and opposing Obama’s threatened military strikes), following on Francis’ persistent calls for peace in places like Ukraine, South Sudan and the Central African Republic.

Hackett said that the Vatican under Francis appears increasingly willing to take advantage of its traditional role as a “safe space” where opposing parties can talk.

“It’s not just information transfer; it’s also when one party on one side of the table can’t talk to the party on the other side,” he said. “Well, the Holy See can be the interlocutor in a way, in many circumstances. It’s not necessarily always formal. It’s a safe space, where you can bounce an idea off.”

Hackett also noted that Francis’ planned visit to the Holy Land in May will give the Vatican another high-profile role in a volatile region at the same time Kerry is trying to develop a framework for peace — also a likely topic of discussions next week.

What will also be important in the meeting between Francis and Obama is whether they establish the kind of personal rapport that can often shape diplomatic relations — and world events. On that score, many expect the pope and the president could hit it off when they spend the first half hour or so in a one-on-one meeting before bringing in aides to tackle the rest of the agenda.

Vatican officials often speak highly of Obama in private conversations, and even when they disagree with him they do so in terms that are far less caustic and charged than the language many U.S. bishops use.

For his part, Obama has gone out of his way to praise and quote the pope. That’s no surprise: Obama got his start as a community organizer working with the Archdiocese of Chicago fresh out of college — an experience that helped shape his views and politics much as Francis’ ministry as a priest and bishop in poor areas in Argentina shaped him.

“Now there’s the foundational element for the president, and here he bumps into Pope Francis, and that’s who he is, too,” said Hackett. “So I think they’re going to have a chemistry that will connect.”