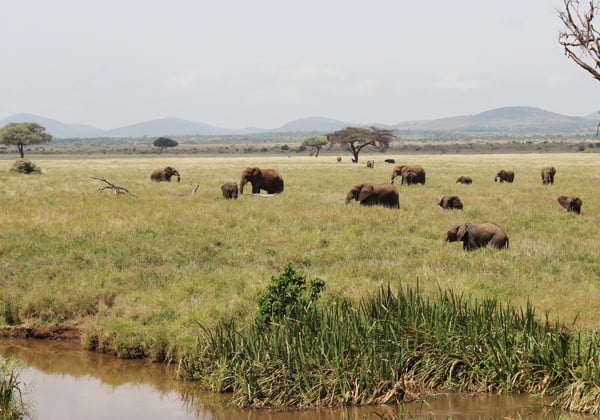 A group of elephants roams in the wild in Kenya. The animals are being poached for their ivory to feed a growing illegal market in Asia. RNS photo by Fredrick Nzwili

NAIROBI, Kenya (RNS) The escalating slaughter of elephants and rhinos is drawing the anger of conservationist clerics, who have begun enlisting church members in the battle to save Africa’s wildlife.

The clerics are driven by a view that these animals are God’s gifts to nature and a critical part of Africa’s heritage.

In Kenya, their concerns heightened in mid-March after the conservation group Wildlife Direct said 16 rhinos had been gunned down in the first three months of the year. More than 30 elephants have also been slaughtered since January.

“We must now treat poaching as an emergency,” said the Rev. Charles Odira, a priest who heads the Kenya Conference of Catholic Bishops’ Commission for Pastoral and Lay Apostolate. “It must be declared a national disaster.”

Odira said priests and lay leaders in wildlife zones were dedicating time each Sunday and during evangelization gatherings to educate communities on the value of wildlife.

“We are targeting attitude change because the poachers pass through the communities’ lands when targeting the animals. We want to change an existing view that animals are dangerous and need to be fought,” said Odira.

International cartels kill the animals to feed a growing illegal ivory market in Asian countries, according to the Kenya Wildlife Service. In Asia, rhino horn powder is wrongly believed to cure cancer and to be an aphrodisiac. A kilogram of ivory is worth approximately $1,500 on the black market, while a rhino horn can fetch $65,000 to $100,000 a kilogram. This is about 2.5 times the value of gold.

The Rev. Patrick Maina, a Presbyterian pastor in the Rift Valley of Kenya, which hosts many private wildlife ranches, is also carrying out educational efforts centered on conservation.

“I am engaging pastors’ fellowship on the dangers of charcoal burning. It is destroying local habitat for the wildlife,” said Maina.

Through his efforts, some youths are also manning electric fences in the reserves.

African religious leaders have reached out to Asian religious groups to raise awareness about where their ivory comes from and the toll that poaching takes on African wildlife.

The understanding in Asia is the tusks are plucked to support “evangelization,” said Odira. “We have to change this religious worldview. ”

But for Imam Idi Kasozi, Ugandan Muslim conservationist, corruption and poverty are escalating poaching in Africa.

“Some community members see poaching the ivory as a quick way of escaping poverty,” he said. “This is greed and I believe stronger punishments will deter them and their accomplices.”

News
In Kenya, faith groups work to resettle youth returning from al-Shabab
Follow us on Facebook!
Submit your photos to RNS