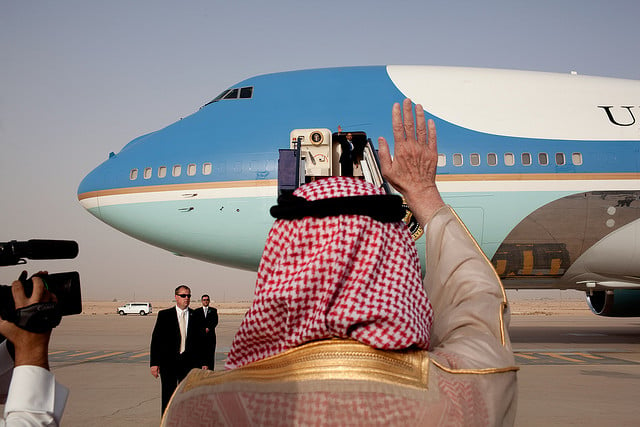 President Barack Obama waves goodbye from the steps of Air Force One as he departs King Khalid International Airport in Riyadh, Saudi Arabia, on his way to Cairo on June 4, 2009. (Official White House photo by Pete Souza)
March 27, 2014
Lauren Markoe

(RNS) Citing paragraphs that disparage Christians, label Jews "pigs," and teach that execution is an Islamic response to gay sex, some Americans are asking President Obama to demand that Saudi Arabia remove religious bigotry from its official school textbooks.

President Barack Obama waves goodbye from the steps of Air Force One as he departs King Khalid International Airport in Riyadh, Saudi Arabia, on his way to Cairo on June 4, 2009. (Official White House photo by Pete Souza)

Led by the Foundation for Defense of Democracies, a Washington-based think tank, American groups are also pressuring the president to release a 2012 State Department report that details offensive material within the books.

"It’s an issue that affects the security of the American people and affects religious groups to which a large number of Americans belong," said David Weinberg, a senior fellow at FDD. And the State Department report, he continued, was funded with taxpayer dollars. "The American people have a very solid justification for wanting to see the contents of that report."

But the State Department is not inclined to make the report public. Deputy spokeswoman Marie Harf said Tuesday (March 25), that the report is an internal document commissioned to drive the work of State Department officials who have been trying to get the Saudis to revise their curricula.

"We believe it’s best and most effective to work with the Saudis on this directly," Harf said.

"We know there’s more work to be done. We've been very clear about that publicly," she said. "Every country reforms at its own pace."

But those who have worked to highlight bigotry within Saudi textbooks deem the Saudis' "own pace" unacceptably slow, and note that the Saudi government produces these books not only for schools in Saudi Arabia, but for Muslim schools throughout the world.

"The U.S. has been urging the Saudis to address this issue for over a decade," Weinberg said. "But students going through the Saudi educational system are still being indoctrinated with these ideas. It is evident that the quiet diplomatic approach that has been preferred by the State Department has been a formula for failure."