(RNS) Let’s be clear: April Fools’ Day is not a religious holiday.

It does, however, trace its origins to a pope.

The day began, most believe, in 1582, when Pope Gregory XIII decreed the adoption of the “Gregorian calendar” — named after himself — which moved New Year’s Day from the end of March to Jan. 1.

The change was published widely, explains Ginger Smoak, an expert in medieval history at the University of Utah, but those who didn’t get the message and continued to celebrate on April 1 “were ridiculed and, because they were seen as foolish, called April Fools.”

Even though the annual panoply of pranks meant to mock the gullible or to send a friend on a “fool’s errand” may not be grounded in any ancient religious merrymaking, the notion of “holy fools” does have a long and respected place in Judeo-Christian history.

Hebrew prophets were often scorned as mad or eccentric for pronouncing unwelcome or uncomfortable truths. The Apostle Paul talked to the Corinthians about becoming “fools for Christ.” And Eastern Orthodoxy still sees the “holy fool” as a type of Christian martyr.

Such views are wrapped up in paradox.

“If the wisdom of the world is folly to God, and God’s own foolishness is the only true wisdom,” argues British clergyman John Saward in “Perfect Fools: Folly for Christ’s Sake in Catholic and Orthodox Spirituality,” “it follows that the worldly wise, to become truly wise, must become foolish and renounce their worldly wisdom.”

Such role reversals were common during medieval Christian festivals.

Some argue that April Fools’ Day is a remnant of early “renewal festivals,” which typically marked the end of winter and the start of spring.

These festivals, according to the Museum of Hoaxes, typically involved “ritualized forms of mayhem and misrule.”

Participants donned disguises, played tricks on friends as well as strangers, and inverted the social order. 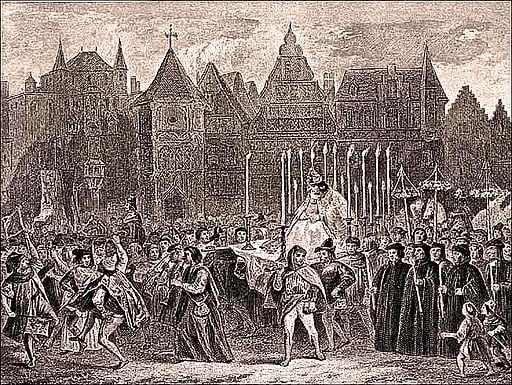 An artistic depiction of the Feast of Fools, with Quasimodo, at Notre Dame, Paris.

“Servants might get to order around masters, or children challenge the authority of parents and teachers,” the museum’s website notes. “However, the disorder is always bounded within a strict time frame, and tensions are defused with laughter and comedy. The social order is symbolically challenged, but then restored, reaffirming the stability of the society, just as the cold months of winter temporarily challenge biological life, and yet the cycle of life continues, returning with the spring.”

Some have mistaken these celebrations for medieval Christianity’s Feast of Fools, which took place each January.

For centuries, this feast was seen as “a disorderly, even transgressive Christian festival, in which reveling clergy elected a burlesque Lord of Misrule, who presided over the divine office wearing animal masks or women’s clothes, sang obscene songs, swung censers that gave off foul-smelling smoke, played dice at the altar, and otherwise parodied the liturgy of the church,” says historian Max Harris, author of “Sacred Folly: A New History of the Feast of Fools.” Afterward, revelers would “take to the streets, howling, issuing mock indulgences, hurling manure at bystanders, and staging scurrilous plays.”

But that’s not what happened, he says.

Even Victor Hugo’s famous novel “The Hunchback of Notre-Dame” — and the Disney animated film loosely based on it — got it wrong. In Hugo’s opening passages, Harris explains, the novelist describes “rowdy theatricals and underworld parades of lay Parisians … ‘on the sixth of January 1482’ as a combined celebration … of the day of the kings and the Feast of Fools.”

Those two celebrations were “nothing of the sort,” Harris wrote in an email from his home in Wisconsin. “Indeed, they were not even an accurate portrayal of lay festivities.” 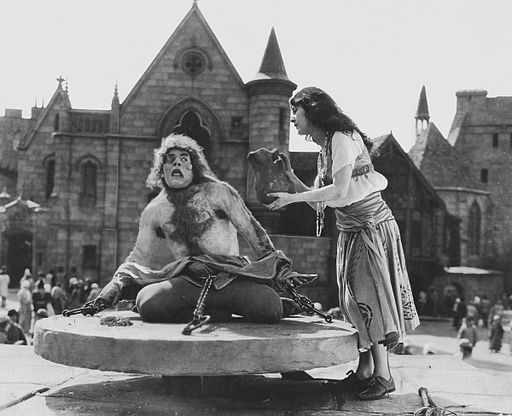 A still from the 1923 movie ‘The Hunchback of Notre Dame,’ which is now in the public domain.

Such revelry, Harris says, “was almost wholly a figment of Hugo’s imagination.”

The actual feast was developed in the late 12th and early 13th centuries as “an elaborate and orderly liturgy for the day of the Circumcision (Jan. 1),” Harris says, “serving as a dignified alternative to rowdy secular New Year festivities.”

The goal, he emphasizes, was “not mockery but thanksgiving for the incarnation of Christ.”

Role reversals did occur, but their point, Harris said, was to underscore Mary’s joyous affirmation that God “has put down the mighty from their seat and exalted the humble.”

The “fools” represented those chosen by God for their lowly status.

This liturgical feast was largely confined to cathedrals and collegiate churches in northern France.

Centuries later, high-ranking clergy “who relied on rumor rather than firsthand knowledge, attacked and eventually suppressed the feast,” Harris saidl. “Eighteenth- and 19th-century historians repeatedly misread records of the feast; their erroneous accounts formed a shaky foundation for subsequent understanding of the medieval ritual.”

The Feast of Fools was finally forbidden by the Council of Basle in 1435.

That misunderstanding of history, though, eventually found its way into Hugo’s novel and even the Catholic Encyclopedia, which linked the “feast of fools” to the pagan celebration of Saturnalia, whose “parody must always have trembled on the brink of burlesque, if not of the profane.”

That is unfortunate, said Harris, who has read and studied the original documents from the time. In his mind, the feast was more sanctified than sacrilegious.