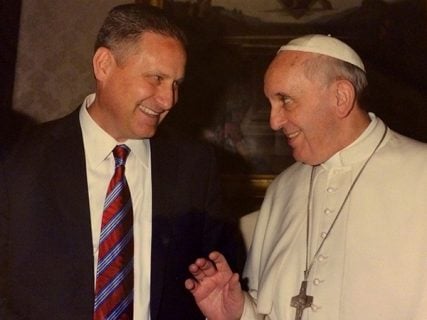 The pope met with Obama on Thursday for the first time, touching on some hot-button disputes between the White House and U.S. Catholic bishops.

A Vatican statement after the meeting said that the two men talked about issues including “the exercise of the rights to religious freedom, life and conscientious objection,” a veiled reference to Obama’s disputes with the American bishops (and the Green family) over the administration’s contraception mandate under Obamacare.

Obama later downplayed the contraception discussions with Francis, telling reporters that he and the pope didn’t spend much time on “social schisms.” He said he and the Vatican’s secretary of state, Cardinal Pietro Parolin, discussed “briefly the issue of making sure that conscience and religious freedom was observed in the context of applying the law.”

The Greens are in Rome for the launch of one of their traveling exhibits, “Verbum Domini II” (Latin for “The Word of the Lord”).

“The purpose of the meeting was to thank the pope for the loan of items to the exhibit from the Vatican museum and library,” said Jennifer Sheran of DeMoss, the Atlanta public relations firm that represents the Greens. “The pope did ask how the (Hobby Lobby) case was progressing.”

Eighteen members of the Green family met with the pope, Sheran said, as well as 10 members from the American Bible Society. The meeting lasted 30 minutes.

The exhibit located at the Braccio di Carlo Magno museum runs April 2 to June 22 and includes 200 ancient and rare biblical texts and artifacts. The head of the Museum of the Bible, which oversees the Green collection traveling exhibits, also joined the gathering with the pope.

This is the second time items from the Green Collection have been on display in Vatican City. Their first display appeared during Lent and Easter season in 2012, but Pope Benedict XVI was traveling during the Greens’ visit.