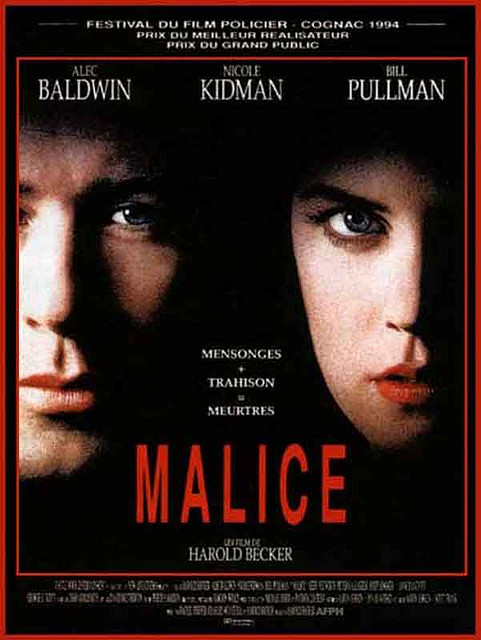 Today, Alec Baldwin is 56 years old. I imagine he's sitting at home with his yoga instructor wife and adorable baby and complaining about paparazzi and eating a lot of food, but I could be wrong. I don't know him terribly well.

The best way I can think of to celebrate Baldwin's birthday is with a post about his best film, Malice. I mostly love the movie because Gwyneth Paltrow dies in it, and while I would never kill Gwyneth Paltrow in real life, I have absolutely no compunction about saying that she could die in every movie she's in with the exception of Sliding Doors and it would make the movie one hundred times better. Seven didn't win the 1996 MTV Movie Award for best movie because Brad Pitt was so good. It won because of what was in the box. But I digress...

Malice was written by Aaron Sorkin and stars Baldwin, Nicole Kidman, Bill Pullman, Peter Gallagher, and Anne Bancroft. It's eerie and as weird as any movie I've seen, loaded with improbable plot twists and characters willing to be bribed with a bottle of whiskey. Baldwin plays an egotistical surgeon who moves in with Kidman and Pullman, a married couple whose renovation put them in dire financial straits.

Baldwin operates on Kidman, whose terrible ovarian cysts (Spoiler Alert!) end up having been self-inflicted. Because ovarian cysts are super fun. The surgery does not go well, and in a deposition to establish whether Baldwin was drunk while he operated, he gives the most Alec-Baldwin-as-a-doctor speech you can imagine:

Text of the speech:

I have an M.D. from Harvard, I am board certified in cardio-thoracic medicine and trauma surgery, I have been awarded citations from seven different medical boards in New England, and I am never, ever sick at sea. So I ask you: When someone goes into that chapel and they fall on their knees and they pray to God that their wife doesn't miscarry, or that their daughter doesn't bleed to death, or that their mother doesn't suffer acute neural trauma from post-operative shock, who do you think they're praying to? Now, go ahead and read your Bible, Dennis, and you go to your church, and, with any luck, you might win the annual raffle. But if you're looking for God, he was in operating room number two on November 17th, and he doesn't like to be second guessed. You ask me if I have a God complex. Let me tell you something: I am God.

These words aren't terribly difficult to believe coming from someone whose public persona is awash in rampant narcissism. Baldwin's casting may have been accidental or it may have been prescient, but either way, the fact of what he's getting at here remains: There are certain people who we treat with the kind of regard and fearful awe because of their jobs or social status that was typically reserved for religious reverence. That's not even entirely true, because this has been happening for a long time -- John 19 records the chief priests of the day sending Jesus to be killed, yelling, "We have no king but the emperor!" We may not have emperors today, but we have doctors and lawyers and college presidents and investment bankers, the people who hold our lives and our comfort like puppet masters. Baldwin could get away with saying something like this in a film because there are people who say things like this in real life.

Anyhow. Happy birthday to Mr. Baldwin. Namaste. I hope this year brings a lot of chilling out.