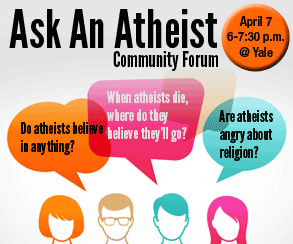 “What’s the biggest misconception people have about atheists?”

I’m asked this often, and I never quite know how to respond. I usually end up answering this question with a question. “Am I limited to just one?” Or, “Where do I begin?”

I struggle because the stereotypes about atheists—most often negative—are numerous and widespread.

These misconceptions are sustained by a lack of communication; atheists in the U.S. are small in number, and it seems likely that many people do not know any atheists (or know that they do). But when people meet atheists, they have an opportunity to revise their ideas about who we are and what we believe.

In that spirit, the Yale Humanist Community is cosponsoring an “Ask an Atheist” panel with Hartford Faith & Values—Connecticut’s nonsectarian, nonprofit religion news website and an affiliate of Religion News Service—this Monday, April 7 as the kickoff event for our first ever Humanism at Yale Week.

At the panel, members of the broader community will have a chance to meet and ask questions of representatives from atheist, agnostic, and secular groups in Connecticut, including Tanya Barrett, Dennis Paul Himes, me, and panel moderator Dan Blinn.

In advance of Monday’s discussion, I invited the other panelists and moderator to share a brief response to the question, “What’s the biggest misconception people have about atheists?” Check out their responses below, and share yours in the comment. 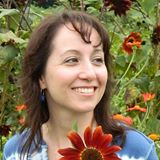 Tanya Barrett, co-chair of the Connecticut Coalition of Reason and 2013 American Atheists Connecticut Activist of the Year:

The misconception about atheists that I run into most frequently is that atheists are immoral, unethical, and not compassionate. Some people have only been exposed to atheists when they are interested in arguing about the separation of church and state, as opposed to seeing them as regular human beings who have the same capacity to be kind and helpful as anyone else. 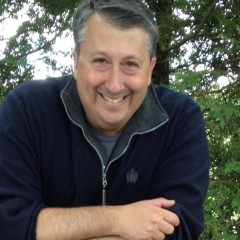 [The biggest misconception is that] atheists have no meaning or purpose in their lives. Many theists find hope, happiness, and love as part of their faith, and therefore believe that atheists are missing out on all of that because they can’t find these things in the same way that theists find them. Absent a belief in a loving God with whom they can spend eternity, atheists suffer in cold despair, their lives devoid of purpose or meaning. Their cynical attitude masks the tremendous hole in their lives. 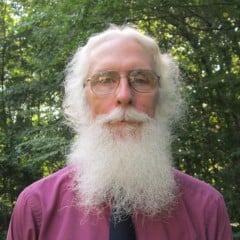 I think the biggest misconception, or at least the one I find myself noticing the most, is the idea that Atheists wish they could have faith, and are envious of those who do.  For the most part Atheists are not only perfectly content to be without faith, but are happy they’ve managed to escape that fate. I think that more often than many people realize a believer and an infidel will each be pitying the other, but each will be too polite to say anything.

In addition to some of the misconceptions offered by my fellow panelists—the ideas that we atheists have no meaning or sense of purpose to our lives, that we are without morals, that we yearn to believe—I think another misconception is the idea that atheists and theists do not and cannot identify shared values or areas of mutual concern.

This is a harmful and ultimately dehumanizing assumption, predicated for some on the idea that atheists are so completely unlike theists—and that the chasm between believers and nonbelievers is so vast—that it isn't valuable or even possible to work together for the common good.

But the reality is that we aren't as different as we may think. Theist or atheist, we're all trying to construct meaningful lives, understand ourselves and others, and learn more about the world around us. So let's get together and get to know one another better.

Readers: what do you think is the biggest misconception about atheists? Please let us know in the comments. Perhaps we’ll incorporate your thoughts into Monday’s panel discussion.