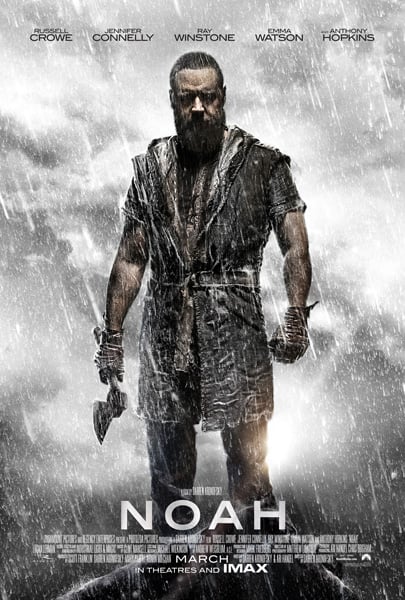 (RNS) The new “Noah” movie has everything you’d expect in a biblical blockbuster.

The poster for "Noah" the movie. Photo courtesy of Grace Hill Media

But the Rev. Wil Gafney sees something missing: a hint of ethnic diversity.

“In this version of Noah, black people do not exist,” she said.

While much of the conversation about the "Noah" film has focused on theology and the degree to which it strays from the biblical text, few people seem to notice the all-white cast, said Gafney, an Episcopal priest and associate professor of Hebrew and Old Testament at the Lutheran Theological Seminary in Philadelphia.

That’s worrisome, she said, especially at a time when the United States is becoming more and more multiethic.

“I hoped that at least there would be some beige people in the movie,” she said. “But there was no one visibly of color.”

Add to that the so-called “Curse of Ham,” a troubling Bible passage from Genesis. It tells how Noah settled down after the flood and planted a vineyard. One night he got drunk and his son Ham saw him naked, a taboo in the ancient world.

Noah curses his son Ham, and Ham’s descendants, including his son Canaan. That Bible passage, also known as the “Curse of Canaan,” was originally understood to justify the subjection of the Canaanites to the Israelites. In later centuries, the narrative was interpreted as an explanation for black skin, and in the United States, as a biblical justification for slavery. White Christian slaveholders argued that Africans were descendants of Ham, and therefore cursed by God.

The new film strays from the Genesis account of the confrontation between Ham and Noah, said Gafney, so there’s no curse.

Instead, she said, the movie simply erases people of color from the story.

Efrem Smith, president of Los Angeles-based World Impact, a Christian nonprofit, and author of “The Post-Black and Post-White Church,” sees “Noah” as part of a pattern.

In the past, biblical epics such as the 1956 classic “The Ten Commandments” featured white actors playing Moses and Pharaoh. Smith said that he’d hoped for something more authentic in this movie.

“When it come to films on Bible stories and biblical figures, we are going back to the days of Charlton Heston,” he said.

Smith said he respects pastors that encourage people to see the film. But he wished they’d been a bit more critical of it, especially on the issue of race.

The Bible, he said, is the most multicultural piece of literature that most people will ever read. So a film about the Bible should reflect that diversity, he said.

But recent films about Bible characters, such as “Noah,” “Son of God,” and a planned version of the Exodus story starring Christian Bale, star white actors in leading roles.

“We need sensitivity from our evangelical brothers and sisters about how white images of Bible figures have impacted people of color in the past,” he said. “We are too comfortable with a white biblical narrative.”

Nashville, Tenn.-based writer and speaker Trillia Newbell, author of “United: Captured by God’s Vision for Diversity,” also was concerned about the lack of diversity in "Noah."

Seeing Jesus or Noah or other biblical characters portrayed by white actors has consequences.

“It shapes how you read the Bible,” she said. “Every time you pick up the Bible, those are the images you see.”

The Rev. Enoch Fuzz of Corinthian Missionary Baptist Church in Nashville, said too many Christians don’t pay attention when it comes to diversity. It’s like a blind spot, he said.

“We want heaven to be a place of diversity -- and then we don’t see it when it is missing here on earth,” said Fuzz.

Some of his pastor friends had encouraged him to see “Noah,” in hopes of getting people to talk about the Bible. But he’d decided to skip it, because of the lack of diversity in the cast.

Anthea Butler, a blogger and associate professor of religious studies at the University of Pennsylvania, said the filmmakers seemed to treat the story of Noah more like a science fiction story such as "The Lord of the Rings" than a retelling of a biblical tale.

That may explain why the cast doesn’t fit the movie’s setting in the Middle East, she said.

But their casting decisions send a troubling message, she said.

“It’s a world where only white people get saved,” Butler said. “This doesn’t look like the world that God created.”

Butler suspects that filmmakers may have made a major marketing error.

A new report from the Center for the Study of Religion and American Culture found that African-Americans are the most likely to read the Bible. So they care about Bible stories and may be turned off by this new "Noah" movie.

“Black women carry their Bibles around and read them all the time,” she said. “And they cannot see themselves in this movie.”

She had some advice for Hollywood producers looking for the next biblical blockbuster.

“If someone wants to make a ton of money right now, they should go out and remake ‘The Queen of Sheba.’”