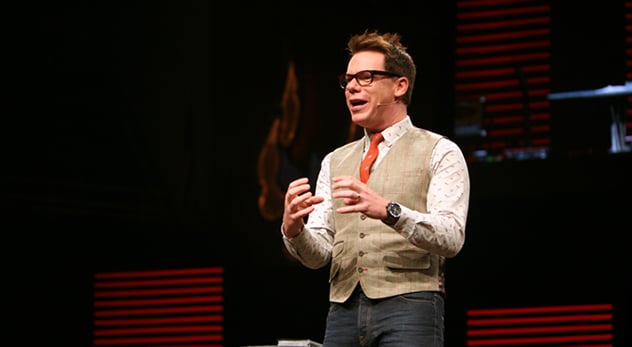 When you think of Las Vegas, you may think of slot machines, strip clubs, and Zach Galifianakis shouting, "There is a tiger in the bathroom." You probably don't think of Christian churches. Yet, somehow, Jud Wilhite has managed to grow Central Christian Church to 19,000 members and four campuses in the middle of it all.

The Sin City pastor is now promoting a new message about what he calls "the God of yes." Believers have often defined Christianity as "no," reducing it to a series of rejections of just about everything God has created. In his book, "The God of Yes," Wilhite urges the faithful to throw off these ideas and discover a divine "yes" to all of life. Here, we discuss his message and whether he's just trying to make faith more palatable and positive.

RNS: You say, “Many people in our culture think of Christianity and 'no' comes to mind.” What does that mean?

JW: A lot of people see God as the God of "no." He’s the cosmic cop in the sky waiting to write you up or give you zits on the day of your senior prom for all the wrong you’ve done. The media portrayal of Christianity--sometimes justified and other times not--can leave you with a sense that God is anti-everything. But in Jesus God has revealed himself as pro-love, pro-forgiveness, pro-compassion, pro-service, and pro-life in the fullest and richest sense imaginable. Too often the focus is on what God is against, and there are plenty of those  mentioned in the Bible. But there is even more that God is for. In "The God of Yes," I hope to draw attention to these things.

RNS: But there are many places in the Bible where God-followers are instructed to reject destructive things with a firm “no." In fact, the Ten Commandments are largely a list “thou shalt nots.” Your thoughts?

JW: Certainly there are plenty of “no’s” in the Bible. But the big story of the Bible is that God seeks relationship with people. From a Christian perspective, the big picture is that God is for us in Jesus and went all the way to the cross to show His love for us. The "no's" in the Bible are to lead us more fully to live in God’s "yes" and experience all of life not as guilt, but as gift. The commandments serve to lead us to a fuller life God designed for us, not to keep us from it.

RNS: You root your arguments in the book of Ecclesiastes. I’ve read Ecclesiastes, and it strikes me as a real downer. Where do you find a divine "yes" in this brutally honest book?

JW: Ecclesiastes is, on the surface, the biggest “no” book in the Bible. But the power of it comes by reading it as the journal entries of someone who has tried to find meaning apart from God. The interpretive phrase, “under the sun,” which occurs around 30 times, is important. The phrase points to life “under the sun” without regard for the God who is over the sun, over all of life. Where each aspect of life pursued apart from God leads to a chasing after the wind, the opposite becomes an opportunity to discover meaning in living under God. In this way, Ecclesiastes as a roundabout “yes” to God in each area of life and a warning for the lack of satisfaction that can ultimately be experienced apart from God.

RNS: One criticism of your book might be that you’re attempting to put a positive veneer on a faith that is explicitly full of social, moral, and behavioral restrictions. Are you trying to make Christianity more palatable to those whose faith is faltering or who have not yet believed?

JW: I viewed God for years as the God of "no," and it had a negative affect on my faith and life. I defined my faith more by what I was not doing, rather than by what I was. I became primarily concerned about what to avoid, rather than about what to engage in. Both are important. The result for me was frustration, both at an incomplete understanding of who God revealed Himself to be, and at my own lack of faithfulness to God. Understanding what God is for and giving myself to that allowed me to learn how to celebrate God and his gifts each day. I began to live more fully in His grace. I took God more seriously and myself less seriously, and discovered so much more compassion for others.

We’re all broken people on the journey to healing. At least I am. As someone said, “I may be a mess, but I’m God’s mess.” The God of Yes is my best attempt to encourage fellow messy people to live with intentionality toward God.

RNS: What’s the good news in this book for someone who's already a person of faith and for one who’s not?

JW: For people of faith, I share how we can replace feelings of frustration with a vital spirituality that gives fulfillment through faith. I write about how we can break destructive beliefs about God and embrace God’s "yes" to all of life and experience more contentment in whatever season we are in. For those who are not yet people of faith, I hope to encourage them to reconsider who God is and the difference faith can make in everyday life.