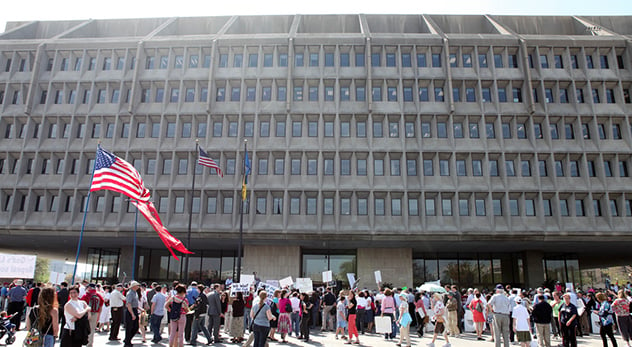 Protestors gather in front of the HHS headquarters for the “Stand Up for Religious Freedom Rally” – Image courtesy of American Life League (http://bit.ly/1oPPvhz)

The Green family, owners of the 609 Hobby Lobby stores, are to conservative Christianity what the Kardashians are to the E! network: poster children.

The billionaire believers are outspoken Christians who claim to run their company based on the teachings of the Bible and spend at least one-third of the company’s annual profits on evangelical causes. On March 25th, the Greens prayed together before entering the Supreme Court to argue that their $3.3 billion for-profit business should receive a religious exemption from the Obamacare contraception mandate. Conservative evangelicals everywhere were interceding with them.

Given the way the Green’s fight with the federal government has rallied so many believers, one might assume the 77% of Americans who identify themselves as Christian overwhelmingly support the Greens and the battle against contraception. (Hobby Lobby continues to provide insurance coverage for 16 forms of birth control but object to any form of contraception that would terminate a fertilized egg.)

But many believers—namely Christian women—don’t see the issue quite the same way.

According to a Public Religion Research Institute (PRRI) poll of 1,009 Americans, 60 percent of Christian women agree “all employers should be required to provide their employees with health care plans that cover contraception or birth control at no cost.” The survey also shows that a majority of Americans—including Catholics and white mainline Protestants—support requiring employers to provide health care that includes free contraception. 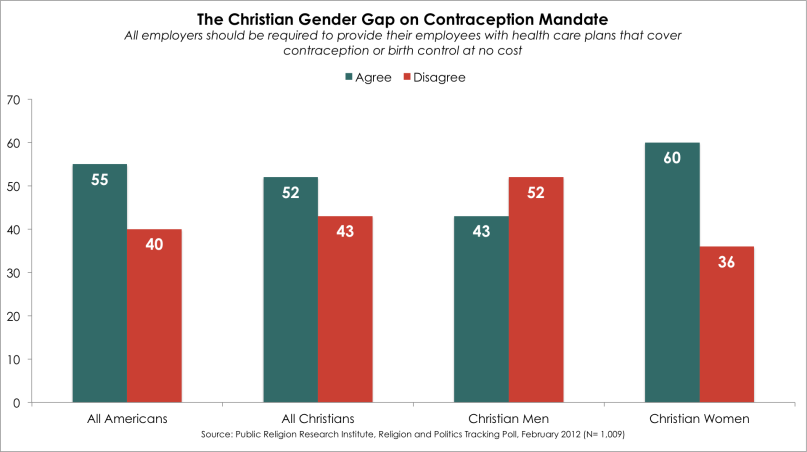 The survey was conducted in 2012, but PRRI has only now released analysis aggregating all Christian women, exclusive to Religion News Service.

“When we initially released this report, we were looking at gender differences across the board,” said Robert Jones, CEO of PRRI, “but we didn’t look at the differences among Christians.”

Jones notes that women end up paying for contraception more often than men, so there is an economic component contributing to the opinions of these Christian women who support employer provided contraception.

Amy Butler, senior pastor of Calvary Baptist Church in Washington D.C., told me she doesn’t think Hobby Lobby should be exempted, and said she suspects their claim “is actually a big business issue rather than a religious liberty issue.” Butler believes that people are missing the most significant matters at stake in this debate.

“Many Christians, and evangelicals in particular, are pre-occupied with issues related to sex and not concerned enough with issues of justice and poverty and loving our neighbors and others issues Jesus asked us to care about,” Butler says. “The idea that contraception is already available is a foil and folks who stands to lose when it is taken away are the poor and the least and the vulnerable.”

“Women have been on the losing side of this issue for most of the 20th century,” Butler says. “Restricting contraception hurts women, and it hurts poor women.”

Sister Simone Campbell of Network, a national Catholic social justice lobby, holds similar views to Butler’s. She told me the key to Catholic teaching on the issue is the intent with which one acts. Since we can’t create laws that govern intent, she prefers letting people act according to their consciences. Campbell does not agree with Hobby Lobby’s rationale and said a decision in their favor would be problematic.

Campbell notes that physicians often prescribe contraception for purposes other than preventing pregnancy. She admits that a doctor prescribed her birth control to treat an irregular period when she was younger, though she wasn’t sexually active.

Many Christian men also support employer provided contraception—43 percent of them, according to PRRI.

David Gushee, an evangelical and professor of Christian ethics at Mercer University, argued that for-profit companies should not have the same religious liberty protections as houses of worship and religious organizations. He stated bluntly in a column for the Associated Baptist Press: “I believe [Hobby Lobby’s] claim should be denied.”

Gushee, author of “The Sacredness of Human Life: Why an Ancient Biblical Vision is the Key to the World’s Future,” stated that many contraceptive measures such as morning-after pills and intrauterine devices do not induce abortions as Hobby Lobby and some conservatives claim.

Though Hobby Lobby’s evangelical supporters have dominated media coverage of this debate, many faithful women and men hold an opposing view on contraception.