(RNS) For many Jews, matzo tastes no better than the cardboard box it comes in. 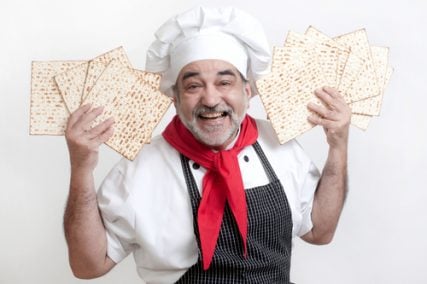 A smiling chef with matzo.

On the first day of Passover, the crackerlike concoction of flour and water summons warm memories of holidays past. But then, matzo fatigue can set in. Matzo doesn’t offer much in the flavor department. And it binds up the digestive tract.

It’s not called the “bread of affliction” for nothing.

Nonetheless, matzo plays a central role in the Book of Exodus, the iconic liberation story that Jews celebrate during Passover each spring. When the holiday begins after sunset Monday (April 14), they will eat matzo at their Seders, the ritual Passover meals.

The unleavened matzo reminds that the Israelites, fleeing slavery with Pharoah’s army at their heels, had no time to let their bread rise, and ate flat matzo instead.

“Each year, to remember this, we eat matzo on the first two nights of Passover, thereby fulfilling the Torah’s commandment, ‘Matzo shall you eat,’” said Rabbi Motti Seligson of Chabad, a Brooklyn-based organization of devout Jews.

Jewish law requires the eating of matzo. But that doesn’t mean it’s beyond ridicule. A common Passover joke: What do you call someone who derives pleasure from the bread of affliction? A matzochist.

Tina Wasserman, the author of “Entree to Judaism: A Culinary Exploration of the Jewish Diaspora,” understands personally that the Jewish attitude toward matzo can be conflicted. She calls herself a fan, “but after eight days of eating matzo, people go a little nuts with not wanting to eat matzo.” 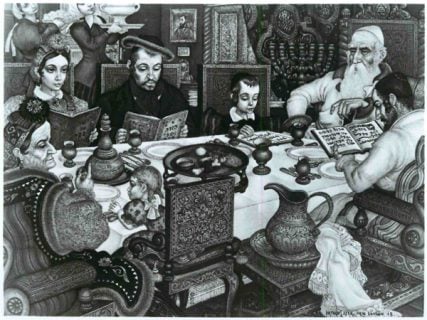 Passover is an eight-day holiday. To identify with their ancestors who wandered through the desert, and those still in bondage, Jews are not supposed to eat leavened bread, cereal, pasta — or any such carb — during Passover. Though the obligation to eat matzo applies only to the Seder meal, held on the first two days of Passover, observant Jews will substitute matzo for bread for all eight days.

At first, the idea of cracking open a fresh box of matzo, which one hasn’t eaten for nearly a year, can be exciting.

Breaking matzo along its perforations produces a satisfying “crack.” The smell of wheat can conjure up images of ancient ancestors savoring their first taste of freedom. And children love the post-Seder tradition of searching for the “afikomen,” a piece of matzo hidden by the grown-ups that may be exchanged for a small prize upon discovery.

But the love affair can be short-lived. As Toronto comedian Ilana Waldston has blogged:

Most observant Jews get pretty sick of the stuff within a few days. It’s tasteless and it binds the digestive tract something awful, giving a whole new meaning to the saying “Let My People Go.” Moreover, crushed Matzah, known as Matzah meal, is used instead of flour in a multitude of dishes, giving those edibles the relative weight of a Buick.

Joan Nathan, best-selling author of “Jewish Cooking in America” and nine other cookbooks, understands how boring matzo can get. But matzo also makes her think, she said. Though she describes herself as not particularly religious, she takes the traditional observances of Passover seriously, ridding her house of “hametz,” or leavened food, before the holiday, and reflecting on matzo’s biblical roots.

“It’s strengthening in a way,” she said. “It makes you realize the hardness not only of the desert, but of all the things that Jews have undergone to make them stronger.”

Nathan has cookbooks full of ways to make matzo not so monotonous. Among them: dipping matzo in chocolate, and a recipe she inherited from her father’s family, “chremslach,” fritters made from currants, apricots, almonds and three sheets of crumbled matzo.

What if you’re not Joan Nathan? What if you don’t have the time or talent to turn matzo into the glossy dishes that illustrate her cookbooks?

Geshmirta matzo, in which a cream cheese and sour cream mixture is topped with cinnamon and baked, photo by Dave Carlin, courtesy of Tina Wasserman’s Cooking and More and Reform Judaism.org.

The market offers many ready-to-eat products designed to make matzo more flavorful. Matzo baked with eggs has its fans. “Everything” matzo is the equivalent of the “everything bagel,” topped with poppy seeds, salt, onion and garlic. And though Nathan makes chocolate matzo by hand, supermarkets in areas with even small populations of Jews will often stock chocolate matzo in a box.

But some more observant Jews contend that matzo is not supposed to be exciting. They ask: How is chocolate covered matzo the “bread of affliction”? Some will forgo not only dressed-up matzo but will eat only “shmura” or “watched” matzo, which is prepared under extra scrutiny to ensure that it’s never had the opportunity to meet up with moisture and turn into hametz.

But whether Jews go for the shmura or something more flavorful, on about the sixth day of Passover, visions of croissants and English muffins may intrude into consciousness. And the binding issue may demand attention. 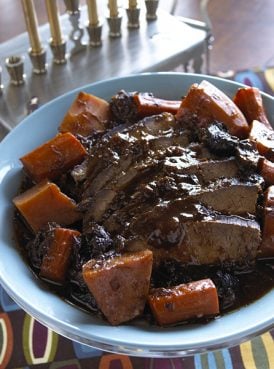 Chef Wasserman offers some advice. First, she said, cut back. The obligation is to consume matzo during the Seder. But for some reason, she said, many Jewish cooks who bake maybe once a month when it’s not Passover, will bake with matzo nearly every day during Passover. “You don’t have to eat matzo at every meal,” she reminds.

Second, to address the gastronomic discomfort, Wasserman offers her recipe for prune tzimmes, a stew of fruits and vegetables.

“You really need something with prunes for Pesach,” she said, using the Hebrew word for Passover.