Last month, the British Humanist Association (BHA) made waves around the world by launching a new video series, “That’s Humanism!”

These concise, engaging, and thoughtful videos speak to important questions (“What makes something right or wrong?” “How can I be happy?” “What should we think about death?”) from a Humanist perspective.

For many, the voice addressing those questions was instantly recognizable—it belongs to Golden Globe Award-nominated actor, comedian, author, and activist Stephen Fry, who narrates the video series.

Fry, a distinguished supporter of the BHA, has been an outspoken voice for Humanism for years. I spoke with him about why he decided to narrate these videos, how Humanism informs his approach to life, and what else the BHA is currently working on.

Chris Stedman: Why did you decide to work on these videos?

Stephen Fry: The word atheism is a hard, negative one to some ears. Secularism is a confusing word, too. Humanism is better understood, and it seemed to us that the videos could encourage the young with no actual religious conviction to know that there is an intellectual, moral schema with a noble heritage out there.

Religions have deep pockets and much to gain from recruitment. Humanists are not interested in recruiting. There is no establishment of Humanism, no imam, pope or archbishop—merely the opportunity to test one’s own instincts and experience against the “revealed” truths.

Most people in Britain aren’t religious, and we wanted to let people know that there is a positive word for what they believe: Humanism. Younger people in Britain are generally not as religious as people from older generations—but as with anyone else it’s not always the case that it’s easier for young people who are questioning the world around them to encounter the full range of options available to them. That’s why it’s important for have campaigns like these, to reach new people.

CS: What do you hope viewers will take away from watching these videos?

SF: Enjoyment and recognition of the simplicity and splendor to be derived from opening of the door of choice. The empowerment of the individual in a universe of wonder that would be so dull, peculiar, callous and hostile if it had been deliberately made by some invisible and obviously malicious and capricious creator. 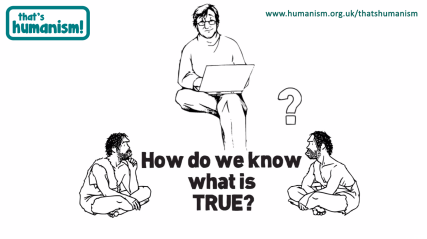 CS: Are these videos targeted at helping Humanists? Educating non-Humanists?

SF: It’s a bit of both. Our original idea was for a campaign that could introduce Humanism to people in an easy and accessible way. We suspect that many people who live as Humanists in their daily lives may not know there is a community of like-minded people in Britain, or even a word for their nonreligious life stance. But at the same time, introducing people to humanism more broadly is also important to us, and we think we’ve managed to do both very well.

CS: How do you define Humanism? How does it inform the way in which you live your life?

SF: Humanism is an approach to life which encourages ethical and fulfilling living on the basis of reason and humanity, and rejects superstition and religion. The most immediate impact of living as a Humanist is that we believe this life is all there is—so what we do and the choices we make really count.

It inspires a lot of enthusiasm for everyday life and urges us to be better to one another, to work towards a better future and a common good. If I believed there was an afterlife I would have so much less motive for filling this life with every experience that is offered up to me.

CS: What is the BHA working on right now?

SF: We’re very busy! At the moment we have a number of campaigns in full swing. Our education campaigning has had some recent victories—for example, we’ve recently persuaded Government to require more and more schools to teach evolution and to ban the teaching of creationism and pseudoscience in science lessons. We’re continuing to campaign against divisive “faith” schools, and we’ve taken our assisted dying campaign all the way to the Supreme Court, and are awaiting judgment any day now.

We’ve also got a number of critical time-sensitive campaigns on right now. For example, representatives of Humanist service personnel are currently excluded from the ceremony in November which marks 100 years since the end of World War I, and we’re doing everything we can to change that.

We’ve also expanded our volunteer Humanist counselors in hospitals and prisons, and we’re continuing to train volunteers who can be classroom assistants in Religious Education lessons. Along with our recently updated our Humanism for Schools website, this means that more teachers and pupils than ever have access to good resources for learning about Humanism. And later this year we’re sending a copy of Alom Shaha’s The Young Atheist Handbook to every secondary school in England and Wales. We’re very pleased about that—it’s a very special book.

CS: How can people get involved or support the BHA’s work?

SF: One of the best ways for people to support our work would be to sign up as members, which of course bolsters our everyday campaigning and supplies us with the funding we need to continue doing the work that we do. We don’t receive any Government funding, and often find ourselves outpaced in terms of wealth and means by some of our opposing campaigners. It continues to impress me, actually, how much we get done with such a small team.

The other way of course is volunteering. We rely on an enormous network of volunteers around the country. We wouldn’t have a fraction of the reach we have if not for their commitment. So truly, any help anyone can send our way, whether it comes in the form of a donation or offering to volunteer for us, would be of enormous benefit to us.

CS: How would you characterize the overall response to the videos?

SF: It’s been incredible. We’ve reached hundreds of thousands of new people, and the vast majority of the responses we’ve had have been incredibly positive. People love the videos and images of famous humanists we’re sharing.

We’ve heard from teachers who say they’ll use the videos in lessons; young people who’ve written to us to say that these videos have helped them accept that they don’t believe in God; and we’ve had an unanticipated international reaction as well, with messages of thanks coming in from all over the world.

One of the amazing benefits of it is that people have been fed through to our website in large numbers, and a huge proportion of them are taking our ”Are you a Humanist?” quiz. That in itself has been great. We’re incredibly touched by it all.