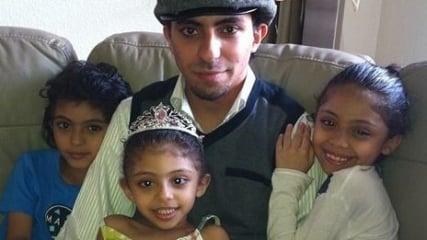 Raif Badawi with his children. Photo courtesy of Badawi.

On January 9, Raif Badawi—a writer and activist who co-founded the “Free Saudi Liberals” blog—was removed from his prison cell and taken to a public square outside of al-Jafali mosque in Jeddah, Saudi Arabia, where he was subjected to the first 50 of the 1000 lashes he’s been sentenced to receive.

Days later, his lawyer Waleed Abu al-Khair’s prison sentence was extended to 15 years. Then, on January 16, Badawi’s next 50 lashes were postponed because his injuries from the first round were too harsh to withstand additional flogging. They are scheduled to resume this week.

Both are being punished for challenging the views and practices of Saudi Arabian religious and political leaders. And they’re not alone; Souad al-Shammary, the cofounder of Raif’s blog, is also imprisoned, as are many other Saudi prisoners of conscience. 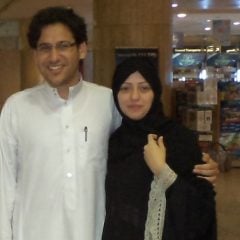 Samar Badawi, sister of Raif and wife of Waleed, has some sense of what they’re going through right now: She was imprisoned in 2010 for disobeying her abusive father. Waleed served as her lawyer, and they eventually married and had a child. But Waleed was imprisoned before their child was born.

Now Samar is working to free both her husband and her brother. A determined human rights advocate, she has also led efforts to fight for women’s rights to vote and run for political office, attain driver’s licenses, and challenge the guardian system. In 2012 her work was honored by the U.S. State Department.

Standing alongside her in campaigning to free Raif and Waleed are Ensaf Haidar and Elham Manea. Haidar is Raif’s wife; after Raif was imprisoned, she fled Saudi Arabia with their children and now resides in Canada, where she tirelessly campaigns for Raif’s freedom. Manea, who is serving as Raif’s spokeswoman, is a Fulbright scholar, writer, and impassioned human rights activist.

I spoke with the three of them about their experiences, struggles, beliefs, and what people can do to help Raif Badawi and Waleed Abu al-Khair.

Samar Badawi, a trailblazing human rights activist, is married to Waleed Abu al-Khair and is the sister of Raif Badawi. 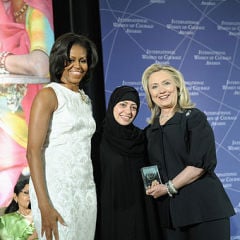 Samar Badawi with Hillary Clinton and Michelle Obama in 2012. Photo via Wikimedia Commons.

Chris Stedman: What do you want people to know about Waleed?

Samar Badawi: I really want people to know that Waleed has been judged under the terrorism law, but he is not a terrorist. He is a human rights advocate who was peacefully calling upon people to gain their political and civil rights.

CS: How did you react to the news that his sentence was extended to 15 years?

SB: Waleed was originally sentenced with ten years. Months after the judgment, the judge ordered him to apologize for his activism and admit the legitimacy of the court. When he refused, they added another five years to his sentence. What happened was terrifying but expected, because it was not the first time the Saudi government has punished human rights advocates.

CS: Despite your husband’s arrest, you’ve stayed in Saudi Arabia. Why? Are you concerned for your safety?

SB: Staying inside Saudi Arabia definitely puts me in danger of government oppression, but I am not responsible for myself only. There are thousands of detainees who choose to face the storm and fight the oppressive regime, regardless of the results. I will stand with them no matter the cost in order to put an end to this horrible situation.

CS: You are very involved in human rights activism, especially in the area of women’s rights. What inspires your activism?

SB: What inspires me is my eternal dream to see my country full of justice, with no oppression, where men and women are equals. I dream of a homeland in which I will never fear any harm to my kids. CS: How has Raif’s arrest and imprisonment impacted you?

Ensaf Haidar: Raif was arrested in 2012, on the day the Minister of Interior, Naif bin Abdulaziz, passed away. Certainly, Raif’s imprisonment has changed our lives completely. There are no words to describe the amount of suffering that we are living with.

CS: How do you balance your efforts to free Raif with raising your children?

EH: I try the best I can to make up for his absence, while at the same time continuing my defense of him.

CS: You’ve been very involved in organizing protests in support of human rights and freeing Raif. Did you ever think you would be involved in this kind of work? What keeps you going?

EH: I never expected it at all! My faith in the just cause of Raif’s case, as well as the extent of the injustice that has fallen upon him, motivate me to keep going.

Dr. Elham Manea, a prolific writer and human rights activist, is the spokeswoman for Raif Badawi. 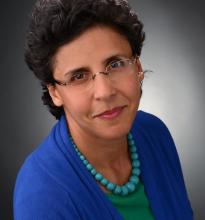 CS: What is the most important thing people can do to help Raif and Waleed?

Elham Manea: Keep their cases alive. Both Raif and Waleed are symbols of the lack of respect for fundamental human rights in Saudi Arabia. Many prisoners of conscience are languishing in Saudi prisons and the world seems to have forgotten them. We remember them when we remember Raif and Waleed.

CS: As a friend of Raif, how do you deal with the ups and downs of working on his case?

EM: By working on his case more. There are moments when I crack down. That is only natural. And I can only imagine what Raif’s wife Ensaf and their children are going through. When setbacks happen, I cry—then I draw strength from my frustration and anger and start working again.

CS: You often refer to “humanistic Islam.” What does that mean to you?

EM: A humanistic Islam respects that faith matters, and does not deny it, but argues that faith should be based on rationality—for without it, it can lead to tyranny in the name of God. My religion is based on the principles of freedom of choice and rationality.

CS: What are your long-term goals? What do you hope will change in Saudi Arabia and around the world?

EM: In Saudi Arabia the aim is twofold. First, the immediate and unconditional release of Raif Badawi and Waleed Abulkhair and their reunification with their families. Second, Saudi Arabia is a member of the Human Rights Council—it is about time that it respects its obligations under international human rights conventions and treats its citizens with dignity and rights.

Around the world, I think it is imperative that we recognize that human rights are universal. Expressing an opinion, criticizing a religion, choosing one’s religion or not choosing a religion at all, freedom of sexual orientation, right to political activism and association, right to fair trial, right not to be tortured—all of these are universal rights. Many men and women in different parts of the world are fighting for these very rights and paying a high price for that. Listen to their voices and do not be indifferent.

These interviews were edited for length and clarity.