(RNS) Louisiana Gov. Bobby Jindal, widely considered a rising star in the Republican Party and a possible 2016 presidential candidate, will be the commencement speaker at Liberty University on May 10. 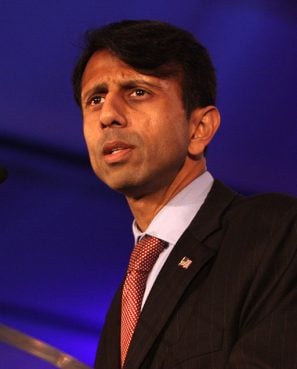 “Many believe (Jindal) could hold the highest office in the land someday,” Liberty President Jerry Falwell Jr. said in a statement on Wednesday (April 16).

In an interview, Falwell was hesitant to give his personal opinion of Jindal since the two men have never met. Instead, he deferred to Liberty’s law school dean, Mat Staver.

“He’s a committed Christian,” Falwell said. “Mat Staver said he heard him speak and he sounded like a Baptist preacher.”

Jindal is Roman Catholic, and Jerry Falwell Jr. said that every year, the school gets questions about inviting nonevangelicals to speak at commencement. He estimated that just eight of their past keynote speakers have been evangelicals.

“Every year, I explain that it’s always been our tradition to have speakers of other faiths,” he said, noting addresses by Glenn Beck and Mitt Romney, who are Mormons. He said Liberty always has at least one evangelical also give remarks.

The school has been in hot water in recent weeks related to other issues.

Ronald Godwin, Liberty’s senior vice president of academic affairs and provost, appeared in a video discussing what appeared to be a partnership with controversial televangelist Benny Hinn. Falwell called the conversation “a mistake,” and the university later said there would be no partnership between the two going forward.

Another controversy erupted earlier this month when the school hired artist Geoffrey Goldberg, who is also an openly gay activist, to choreograph an upcoming “Mary Poppins” show on campus.

“We have strict requirements for our faculty to make sure their doctrine is sound, but we’ve never applied that same policy to part-time help,” Falwell said. “You couldn’t operate if you made sure all the goods and services every day came from born-again Christians. You’d be out of business in a few days. It’s silly for people to make that argument.”

Also, late last fall, the university changed its student honor code to allow men to wear collarless shirts, like T-shirts, in classrooms. Students were split on the issue, according to a report in the student newspaper.

Students must adhere to a 20-page student honor code, including rules that prevent them from watching R-rated movies, gambling or attending dances. “Hair should be no longer than the middle of the ear and should be cut in such a way that it will not come over the collar or eyebrows,” the section on men’s dress says.

Falwell said most of the changes made to the code, including allowing jeans and flip-flops, happened when his father was still alive in 2007.

“Girls were able to wear shirts without collars, so we did this because the guys thought it was unfair. It was more of a gender thing,” Falwell said. “The changes my father made 10 years ago are still relevant and still workable, and they work well for us, so we don’t have any plans to change them.”