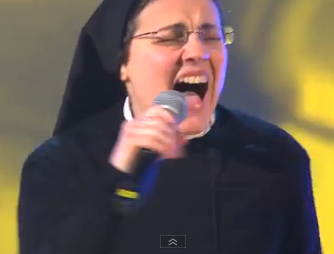 ROME (RNS) A young nun who captivated TV viewers with her performance on an Italian talent show has become a global Internet sensation -- attracting more than 45 million hits online -- and a record number of viewers for the program this week.

Sister Cristina Scuccia performs on "The Voice of Italy."

Sister Cristina Scuccia, a 25-year-old nun from Sicily, electrified the show, "The Voice of Italy," last month when she sang the Alicia Keys hit "No One" in her traditional black habit with a cross around her neck.

On Wednesday (April 16), more than 3 million viewers tuned into the latest episode of the show to see the young nun perform Cyndi Lauper’s "Girls Just Want to Have Fun" in a knockout contest with another female contestant Luna Palumbo, who was voted off the show.

“I’m excited, really thrilled,” the diminutive nun said on TV. “The fundamental thing is to have fun.”

Her latest performance attracted more than 300,000 hits on YouTube within 24 hours.

When the show’s four judges first heard Sister Cristina singing with their backs to the stage in March, there was a dramatic revelation when they turned and discovered her true identity. Three nuns from her convent cheered enthusiastically from the sidelines.

Her first "sister act" was posted on YouTube and immediately went viral, and the TV program attracted a record audience of 3.5 million spectators. Grammy Award-winner Keys congratulated her and Italians likened the nun to the come-from-nowhere Scottish singer Susan Boyle.

“The beautiful thing is she had the courage to come out of the convent to bring young people this great message of love,” said her mother, Lina, during a TV interview. “She always had enthusiasm to sing.”

Sister Cristina, who lives in an Ursuline convent in Milan, believes she has a duty to “evangelize” viewers.

Unlike most aspiring singers, she is not looking for a multimillion-dollar record deal or designer clothes; she did, however, appear on the covers of a few Italian gossip magazines after her TV debut.

The TV program has restricted media access to Sister Cristina and the nuns at her convent declined to comment when contacted by a reporter.

But she told Italy’s Catholic daily Avvenire that worldwide acclaim won’t change her commitment to her vocation.

“In my daily life, something has changed,” Sister Cristina said. “Now people stop me in the street and thank me for the joy that I have given them with my performance.

“But the substance of my life has not changed much and in my religious community everyone supports me and is with me on this journey.”