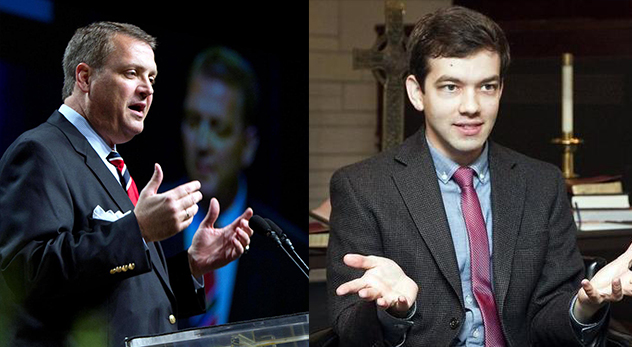 A debate over the Bible and same-sex relationships has erupted within Christian circles. Albert Mohler and Matthew Vines, leaders from opposite sides of the issue, make their cases.

It’s among the hottest of the hot button issues in American culture, but increasingly same-sex marriage is also a matter of dispute within Christian churches. This week, the temperature rose once again with the release of “God and the Gay Christian: The Biblical Case in Support of Same-Sex Relationships” by Matthew Vines. The book, written by a former Harvard University student whose “The Bible and Homosexuality” lecture went viral on YouTube two years ago, was met with swift criticism from conservative Christians who oppose same-sex marriage and behaviors.

One such critic was Dr. Albert Mohler, president of The Southern Baptist Theological Seminary who is considered an intellectual paragon by many on Christendom’s right flank. In a response to Matthew Vines posted on his blog, Mohler issued a rallying cry for Christians to resist Vines’ attempt to “overthrow two millennia of Christian moral wisdom and biblical understanding.” He also announced the release of an e-book entitled, “God and the Gay Christian? A Response to Matthew Vines.”

Because of the importance of this debate, I decided to invite both Albert Mohler and Matthew Vines to answer some questions on the topic. Because Albert Mohler was the first to respond to my inquiry, his answers are listed first.

RNS: In 2012, Laurie Goodstein of “The New York Times” reported on churches splitting over the issue of gay unions. Do you think this issue threatens to split, not just individual congregations, but the larger Christian church?

AM: Among the vast majority of the Christians in the world – now estimated at more than 2 billion – this is not a controversial question. The question is localized largely in Europe and North America, and it is especially controversial now in the United States and the United Kingdom. In both of these nations it is clear that the question of gay unions and same-sex marriage (and the larger question of the morality of same-sex sexuality) will divide many churches and denominations, and at every level. This question lands right at the most basic teachings of the church on morality, biblical authority, and the gospel. Splits are inevitable.

MV: This issue already has been splitting the church. The church I grew up in left the Presbyterian Church (USA) over this issue, as a number of more conservative churches did. So I think the more pertinent question is not whether splits are happening, but how we can move forward in the most unifying, conciliatory ways given that there already is significant division. At my childhood church, most people’s primary concern wasn’t same-sex relationships themselves, but what they thought gay acceptance pointed toward: a devaluation of the role of Scripture in Christian faith. Most evangelicals haven’t been seriously engaged on theological terms on this issue yet, which is part of why the chasm between affirming and non-affirming Christians seems so wide right now. By focusing firmly on Scripture from an evangelical theological framework, I’m doing my best to help repair the existing divides rather than exacerbate them.

RNS: Many note that Christians for millennia have held to a traditional view on this issue. But the church also held to certain positions on matters of race before some challenged prevailing and accepted interpretations of scripture. How does Church history and tradition factor into your thinking?

AM: One of the key insights of the Reformation is that the church must always be reformed by the Scriptures. We must test everything by the teachings of the Bible, and correct our beliefs and practices when these are found to conflict with what the Bible teaches. The Christian church has had to do this regularly, on matters great and small. But I am confident that the church has not misread the Bible for 2,000 years on this question, and that the normalization of same-sex sexuality and same-sex marriage cannot be justified in any way by an honest reading of the Scriptures.

MV: I think the most instructive analogy from the Christian tradition on this issue is the question of heliocentrism. For the first 1,600 years of church history, every major theologian and church leader believed both that the earth stood at the center of the universe and that the Bible taught this. With the advent of the telescope, Galileo and others obtained new information, which ultimately led Christians to reinterpret Scripture’s statements about it. I think we’re in a similar situation regarding sexual orientation. Until the past 50 years, Christians didn’t think about homosexuality in terms of orientation. They thought about it simply in terms of excess—along the lines of gluttony and drunkenness. Consequently, there really is no Christian tradition on the specific issue we face today: gay Christians and their committed relationships. Just as with heliocentrism, we don’t need to degrade the wisdom of our predecessors. We simply need to acknowledge that we are in a new interpretive environment, faced with an issue our forefathers were not faced with, and that fact requires us to look at Scripture anew.

RNS: The first time that homosexual behavior is condemned in the Bible, it is also commanded that those who disobey should be put to death? Does this reflect the will and heart of God, then or now?

AM: Christians are informed by the Law as revealed in the Old Testament, but we are not bound by that law. We are bound by the law of Christ and the moral teachings of the New Testament. We are not the theocracy of ancient Israel, bound by its holiness code. We are the church, bound by the law of Christ, and that law clearly teaches the centrality of marriage as the union of a man and a woman, which Christ himself declared to be God’s purpose in creation. We are bound by the moral teachings and warnings of the New Testament, which clearly condemn same-sex behaviors as sin.

MV: The Old Testament does prescribe the death penalty for males who engage in same-sex intercourse, as it does for anyone who works on the Sabbath (Exodus 35:2) or anyone who charges interest on loans (Ezekiel 18:13). In fact, almost all of the punishments in the Old Testament seem very harsh to modern Christians, but we have to keep in mind the very different context of ancient Israel. The ancient Israelites faced threats of starvation, disease, attacks from other tribes, and internal discord, so there was a much greater need for community cohesion and social order. That background helps explain the stringent punishments, even though Christians would not embrace them in the church today.

RNS: The Apostle Paul seems to argue in Romans 1 that homosexual behavior is unnatural and a sign of God’s wrath. How do you understand this passage and how do you think others misunderstand it?

AM: Romans 1 makes clear that we are all sinners, and it explains the reality of human sinfulness in terms of our effort to “suppress the truth in unrighteousness.” Both male and female same-sex behaviors are expressly condemned, and the Apostle Paul describes them as “against nature.” The point of Romans 1 is not just that homosexual sins are sinful, but that all humanity is sinful. But there can be no question that Paul taught that same-sex sexuality represent a unique evidence of human sinfulness—one that should remind us all of our sin and need for redemption. Attempts to make the Bible, and this text in particular, say something other than this are just not plausible.

MV: What most non-affirming evangelicals get right about Romans 1 is that, yes, Paul is taking a very dim view of same-sex relations. He also describes consensual acts, not simply acts of exploitation. But where I think people go astray is assuming that Paul’s understanding of consensual same-sex behavior bears a substantial similarity to our modern conversation. I don’t think it does. Paul—quite justifiably given his context—saw same-sex behavior as a lustful extreme to which all people might be prone if they didn’t control their passions, and he condemns it primarily on that basis. What does that tell us about gay Christians, who seek out relationships not due to insatiable lust, but their desires for love, fidelity, and commitment? It isn’t that Paul was wrong about same-sex behavior; he wasn’t addressing same-sex behavior in anything like the way we’re considering today.

RNS: Let’s get practical. Should congregations welcome people who identify as gay, lesbian, bisexual, and transgender, regardless of their stance on the matter?

MV: Of course. But people need to do more than welcome LGBT people—they also need to listen to them and learn from them. I haven’t encountered too many non-affirming churches that are eager to listen to the stories of LGBT Christians, regardless of their theological positions. There are some, especially among younger evangelicals, but far too few for non-affirming Christians to claim with persuasiveness that their general pastoral approach is self-sacrificial and loving.

RNS: If there is one thing you could ask the other party and those they represent to prayerfully consider, what would it be?

AM: If the Bible, plainly understood by Christians for two thousand years, is not to be trusted to reveal our true identity, our true need, and God’s plan and purpose for our lives, then why even attempt to argue that the church has misread the Bible for two millennia? I would ask those arguing for the acceptance of same-sex sexuality and marriage within the church to consider that they are trying to make of Christianity what it has never been and can never be. What is at stake is nothing less than eternal salvation. The church must not fail those with same-sex attractions by forfeiting the only gospel that leads to salvation.

MV: My main request to non-affirming Christians is simply to listen. If you are straight and don’t have close relationships with many gay Christians, it isn’t appropriate to respond to this conversation with knee-jerk outrage and condemnation. I may be young, but this issue affects my life far more intimately than it affects the lives of straight Christians, and I think it is important for straight people in particular to be open to listening and learning. We won’t all agree in the near future, but if we turn down the volume and respect and value one another’s faith, the church will be able to offer a more Christ-like witness because of it.