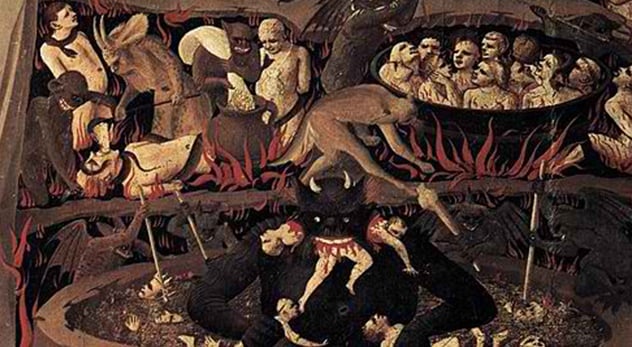 Have you seen that new movie “Hell Is for Real?” Of course, you haven’t. Because it doesn’t exist. It’s heavenly counterpart, however, earned $21.5 million in ticket sales in its opening weekend.

Sixty-four percent of Americans believe in the survival of the soul after death, and a majority believes in both heaven and hell, according to a Harris Poll released in December 2013. But while most are comfortable discussing the afterlife and heaven, talk of hell can scatter the masses.

So why are Americans afraid to talk about hell?

Rebecca Price Janney, a cultural historian and author of “Who Goes There? A Cultural History of Heaven and Hell,” traces the shift back about 70 decades to World War II. During this time, many asserted that American soldiers couldn’t possibly go to hell because they’d already served their time having “been through hell” on the battlefield. The idea offered great comfort to those at home who were grieving lost loved ones.

“This [idea] caught on and persisted over the decades,” Janney says, “and we saw it re-emerge strongly during the September 11, 2001 terrorist attacks: ‘How could these dear people who died so tragically possibly go to hell?’”

Resisting the idea of a literal hell may offer comfort, but the reasons many today shy away from it may be more simplistic and pragmatic. I spoke to several people who have studied the issue and they listed at least three reasons we shrink back from hell-talk:

Hell Doesn’t Feel Fair
Some Americans’ theology of hell begins with arithmetic. The average American’s life expectancy is just shy of 79 years. How many years of punishment in what the Bible describes as “a lake burning with fire and sulfur” would be justified for eight decades of sin?

“Many Americans quantify their sins and then weigh it against not just punishment, but eternal punishment,” says Brian Jones, a pastor and author of “Hell is Real (But I Hate to Admit It).”  “In their 80 years, maybe they cheated on their taxes or even on their wife. When their sense of fairness is projected on God, they have a hard time thinking God would prescribe such a thing.”

These Americans seem to feel like Admiral Fitzwallace advising President Bartlett to avoid a disproportionate response to Syrian aggression on “The West Wing”: “You’ll have dolled out 5,000 dollars of punishment for a 50 buck crime, sir.”

But what about those we think have committed a $5,000 crime? When it comes to Pol Pot or Joseph Kony or even one’s unfaithful ex-spouse, there seems to be less resistance to hell.

“Most people don’t believe they are bad enough to go to hell. Sure, we all mess up. But at least we’re not as bad as that guy,” says Preston Sprinkle, co-author with Francis Chan of “Erasing Hell: What God Said About Eternity, and the Things We Made Up” and professor at Eternity Bible College. “Hell, it seems, may be fitting for the Hitlers and Stalins of the world, but God–we assume–would never send mediocre sinners to hell.”

Hell Sounds Harsh
Another reason people are hesitant to discuss hell, Jones says, is because the only people who talk about it are hateful Christians like those associated with Westboro Baptist Church and “creepy Christians that no one wants to hang out with.” By contrast, he says, most modern believers want to be perceived as kind, loving, and gracious.

“There aren’t very many models out there for how to talk about hell winsomely, so Christians are frozen in their tracks. It’s hard to do something when you haven’t seen it modeled well,” says Jones.

Jason Boyett, author of “Pocket Guide to the Afterlife.” Echoes Jones’s sentiment: “I think some people hesitate to talk about hell because they don’t want to continue to deliver only bad news instead of something that is encouraging and inspiring. The existence of hell is difficult and a challenging part of Christian theology. If you think too much about it, it is really kind of frightening.”

Hell Scares Off Spiritual Seekers
As Christianity continues to lose steam in the West, many Christians have begun to refine their message to attract new followers and not repel skeptics. Those I spoke with all said they felt this impulse is a driver behind why pastors today speak about hell with less frequency and force.

“When you look at some of the old puritan pastors—people like Jonathan Edwards—and their gleeful sermons on hell, those guys were really preaching about it,” says Boyett. “I always read those and think, ‘How did anyone come back to a church like that?’”

Added Sprinkle, “All in all, I think preachers are more skittish about talking about many things that could be a turn-off to the seeker. Hell is probably just one of those topics.”

Jones and Boyett both noted that in addition to numerical growth, concerns about financial giving have influenced the way pastors speak about it.

Don’t Be Shy
Most people I spoke with said they believed perspectives on hell were shifting among Millennials. Sprinkle says he thinks among many young people today the doctrine has been downgraded from a fundamental belief to a secondary one. Boyett says a new generation is more “willing to at least entertain uncertainty about hell.”

Americans, it seems, believe hell exists but they aren’t as sure as they once were. And many question whether it will last forever. They can’t fathom hell for themselves but are okay with others going there—particularly those they consider really nasty sinners.

Christians mustn’t burn with excitement at the thought of souls being punished in the afterlife. But neither should we run from the issue like our hair is on fire. As Kirsten Powers concluded in her USA Today column on hell this week, “forever is a mighty long time.”