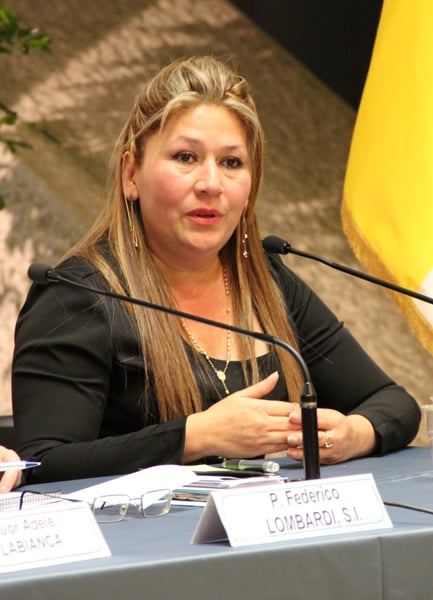 VATICAN CITY (RNS) Floribeth Mora Diaz fought back tears on Thursday (April 24) as she claimed that the late Pope John Paul II had saved her from an inoperable brain aneurysm three years ago.

Floribeth Mora Diaz, who says she survived a brain aneurism due to Pope John Paul II's intervention, speaks at a press conference on Thursday, April 24. RNS photo by Josephine McKenna

Mora will be on hand at Sunday’s historic ceremony in St. Peter’s Square as Pope Francis canonizes both John Paul and Pope John XXIII, the Italian pontiff known as “Good Pope John.”

The Costa Rican mother of four faced the world’s media to explain how her inexplicable recovery was a miracle that had led to the popular Polish pope being declared a saint. Two miracles have been attributed to John Paul's intercession with God, paving the way for his sainthood.

In 2011, Mora was suffering from persistent headaches and was told by doctors that her days were numbered. They said her aneurism was in a “delicate” area and her only option was treatment in Mexico or Cuba, but her family could not afford it.

“The doctors told me there was no sense to continue treatment because they had done everything and there was not much more we could do,” Mora told a packed media conference.

“They said I only had one month to live and there was no hope.”

Confined to bed, she lay holding a magazine with a cover photograph of the Polish pope in her home in Tres Rios de Cartago, 12 miles from the capital of San Jose. Her husband, Edwin, urged her to pray.

“My greatest concern was not dying but concern about what would happen to my children,” she said as her voice faltered.

She claimed her prayers were answered when John Paul II appeared to her in a vision on the day he was beatified -- the first step on the road to sainthood -- after he was credited with his first miracle.

“When I woke up in the morning, I looked at the magazine cover which showed Pope Wojtyla with his arms outstretched.

“I felt a deep sense of healing. I heard his voice say to me, ‘Get up and don’t be afraid,'" she said, recalling one of John Paul's signature lines.

"I went to my husband in the kitchen and told him I was cured. I realized little by little the illness had been taken away.”

In a pre-recorded interview to be aired on Italian television on Thursday night, Mora gave more details about the rigorous medical tests conducted by the Vatican to verify the purported miracle.

Mora was flown to Policlinico Gemelli, a church-run hospital in Rome, where she was registered under a false name while doctors conducted tests for two weeks in October 2013.

“I was meant to be just a tourist from Costa Rica who had fallen ill while on holiday in Italy,” she said. “They demanded the greatest secrecy. No one was to know who I really was."

Her own neurosurgeon was also convinced. "If I cannot explain it from a medical standpoint, something nonmedical happened," said Dr. Alejandro Vargas Roman. "I can believe it was a miracle."

The first miracle attributed to John Paul was the apparent healing of a French nun, Sister Marie Simon-Pierre, who recovered from Parkinson’s disease with no medical explanation after praying to the late pontiff soon after his death in 2005.

Pope Francis has provoked fierce debate within the church by approving John XXIII’s sainthood with only one miracle -- not the two that are normally required.

John was beatified in August 2000, based on what was considered a miraculous healing of an Italian nun, Sister Caterina Capitani, after a medical commission found no scientific explanation for the event. 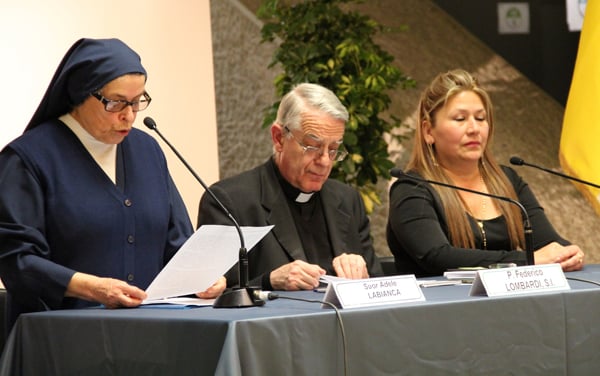 Sister Adele Labianca, who took care of Capitani, on Thursday revealed details of what she called the miracle that saved the nun’s life in May 1966 after she had prayed to the pope, who had died three years earlier.

Capitani had undergone an operation to remove a cancerous tumor in her stomach but her condition was deteriorating when she suddenly recovered. Labianca said doctors had no medical explanation for what took place.

“It was a miracle,” said Sister Labianca. “Not only was it a physical healing but an internal healing when you could feel the presence of God.”

Meanwhile, Ali Agca, the gunman who tried to assassinate John Paul in 1981, said that John Paul is not a saint and that attempts to "deify a human being" are sinful.

In an interview with the Italian news agency ANSA, Agca confirmed he “definitely wanted to kill” John Paul in St. Peter’s Square and said it was a “miracle” he survived.

After serving almost 20 years of a life sentence in prison in Italy, the Turkish national was pardoned in 2000 and deported to Turkey, where he was imprisoned for other crimes.

Related Posts
By Amy Klein
What good is faith when your fertility treatments aren't working?
By Claire Giangravé
Seven years later, still no trace of Jesuit priest kidnapped in Syria
By Claire Giangravé
Top Vatican investigator on sex abuse says church must empower victims
By Claire Giangravé
In video, Cardinal Pell details his time in prison before being cleared in abuse case
By Claire Giangravé
With tourism and giving down, Vatican tightens belt. It may not work, despite Pope Francis’ hopes.