If he is successful, Arizona’s James Woods will be the first person elected to United States Congress to openly campaign as an atheist.

The last admitted atheist in Congress, Rep. Pete Stark, D-California, served for decades before publicly sharing his atheism. Similarly Rep. Barney Frank, D-Massachusetts, opened up about his atheism last year—after he was no longer in office.

Woods, who is running for Congress in Arizona’s Congressional District 5, wants to be the first to successfully campaign as an atheist, as well as the first blind member of Congress in nearly 100 years.

He’s one of several nontheists making waves in Arizona politics, where atheists are increasingly visible—State Rep. Juan Mendez, D-Tempe, acknowledged his atheism last year. But associating with atheism continues to be a significant political risk in many places, including Arizona. During her congressional campaign in 2012, a number of news outlets and blogs identified Rep. Kyrsten Sinema, D-Arizona, as an atheist—until she released a statement saying that she “believes the terms non-theist, atheist or non-believer are not befitting of her life’s work or personal character.”

With no open nontheists currently serving in Congress and widespread public distrust of atheists, Woods is blazing a bold trail. I spoke with him about his atheism and Humanism, the biggest challenges he has faced, how he plans to address anti-atheist bias, and why he’s running for office.

Chris Stedman: You’re an atheist and a Humanist. What role do your beliefs play in your desire to run for office?

James Woods: I’ve been an atheist most of my life, but witnessing some of the horrible things people have to deal with just to survive has made Humanism really important to me. We’re in a rich country with incredible scientific minds, social entrepreneurs, and business innovators—but people still suffer from things we can solve. Humanism requires that we treat everyone dignity and respect. That we stand up for equality. That we govern compassionately. That we listen to what people need. We need to shift toward progressive Humanist values to address human suffering. Those are the values that inspired me to run for Congress.

CS: What are some of the biggest challenges you’ve faced, and how do they impact the way that you think about public service?

JW: About seven years ago, I survived a MRCA infection—a life-threatening staph infection that’s resistant to antibiotics. I almost died. About a month before my 27th birthday, I was in the hospital fighting for my life and my vision started going. I noticed it getting dim on a Monday and I woke up completely blind on Friday. I’ve never seen since.

I had to have part of my collar bone cut out and most of my toes amputated. I spent about two years in hospitals and nursing homes during my recovery. I ended up on dialysis. I am lucky to be alive, and I’m lucky to have an amazing family that supported me. I had a great medical team. And, as of this year, I have a new kidney. 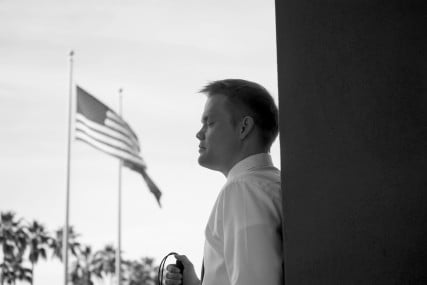 I wouldn’t be here today without so many people investing in me. Our government invested in keeping me alive through programs like Medicaid, Social Security Disability and Nutrition Assistance. My dad invested in me and became my caregiver. And someone I never met gave me a new chance at a healthy life through organ donation.

After all of that generosity and support, it’s time for me to start giving back. I feel like I have a moral obligation to make sure that other people have access to programs like Nutrition Assistance when they need it. I want to make sure other people don’t end up being neglected in nursing homes with no one to advocate for them. I want to work hard toward ending poverty and ensuring everyone has equality of opportunity.

CS: If elected, you’d be the first member of Congress to successfully campaign as an open atheist. How does that feel?

JW: It’s humbling. I’ve heard Arizona state Rep. Juan Mendez talk about how people all over the country reached out to him to thank him when he came out as an atheist. People told him they finally felt represented.

What Juan Mendez did was courageous and inspiring. But it’s also sad to realize that in a country with 300 million people, a freshman state representative from Arizona is the only elected official making atheists feel represented.

One of the things I hope to do with this campaign is to make sure people who are traditionally cut out of the political process feel heard. That includes atheists, but also people with disabilities. It includes people in the LGBT (lesbian, gay, bisexual, and transgender) community and especially people in the transgender community. It includes people whose immigration status is undocumented. Our campaign is about listening to everyone.

CS: How are you preparing for any challenges you might face in your campaign because of your atheism?

JW: I’m not all that worried about my atheism. I have a great team around me, I have Rep. Mendez giving advice and support, I have the secular community and my Humanist community. I’m much more worried about making sure I do a good job advocating for people who are vulnerable or marginalized but don’t have the support I do.

CS: What do you see as some of the most prominent stereotypes about atheists, and how do you hope to challenge them?

JW: The one I run into all the time is morality. In the U.S., we tend to equate faith with goodness. We make faith a really visible part of public life. People who grew up in religious communities often haven’t been exposed to nontheists, and there can be a lack of understanding of atheist ethics. I’m a Humanist, which means I believe in the dignity and worth of all human beings. I believe in human ingenuity—we can solve problems to improve our lives and the lives of people around us. You don’t need religion for that.

CS: Given the stigma attached to atheism, how do you plan to connect with people of faith?

JW: I just keep emphasizing that people aren’t that different from each other. We all care about the health and safety of our families. We want to live in safe communities. We want meaningful work and a stable economy. We do have philosophical differences, but the differences are small compared to our similarities.

I’ll work with anyone who shares my vision of a progressive America regardless of religious belief or nonbelief—and I’ll advocate for all of my constituents. I also really hope that the way my campaign team and I carry myself during this election will give people a positive impression of my Humanism.

Opinion
To pass infrastructure bills, Democrats need to put their faith in moral language
Follow us on Facebook!
Submit your photos to RNS