Lisa Cloninger and Kathi Smith, a couple who has been together for more than 10 years, with their pastor the Rev. Nancy Allison, speak during a press conference held Monday morning (April 28) at Holy Covenant United Church of Christ in Charlotte, N.C. Photo by Patrick Schneider, courtesy of United Church of Christ

DURHAM, N.C. (RNS) The United Church of Christ sued the state of North Carolina on Monday (April 28) over its constitutional ban on same-sex marriage, saying the 2012 amendment violates the religious freedom of its clergy.

The liberal denomination of some 1 million members is the first in the country to attack a same-sex marriage ban on religious freedom grounds, taking a cue from religious conservatives who used the same argument over the contraception mandate in the Affordable Care Act.

In 1972, the UCC was the first denomination in the United States to ordain an openly gay pastor, and in 2005 was the first to endorse the fledgling movement to allow civil marriage for same-sex couples. The Unitarian Universalist Association endorsed the movement in 1996, seven years before Massachusetts became the first state to legalize gay marriage.

The suit asks the federal courts in the Western District of North Carolina to strike down the ban, which was passed by state voters. It argues that the ban limits clergy choices and violates the principle of “free exercise of religion” by requiring clergy to minister to one segment of the public.

A dozen non-UCC clergy and same-sex couples joined the suit.

“By preventing our same-sex congregants from forming their own families, the North Carolina ban on same-sex marriage burdens my ability and the ability of my congregation to form a faith community of our choosing consistent with the principles of our faith,” said the Rev. Nancy Petty, pastor of Pullen Memorial Baptist Church in Raleigh, who joined the lawsuit. 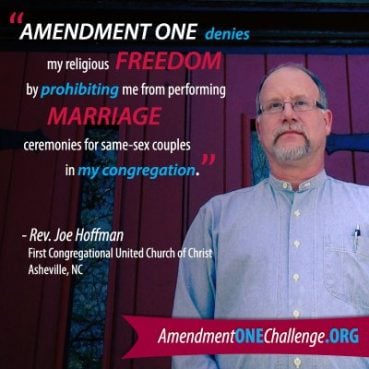 The Rev. Joe Hoffman, pastor of First Congregational United Church of Christ in Asheville, N.C., said the effect of the state constitutional ban on gay marriage is to deny him the opportunity to perform one function of his job.

The Rev. Joe Hoffman, pastor of First Congregational United Church of Christ in Asheville, N.C., said the effect of the state constitutional ban on gay marriage is to deny him the opportunity to perform one function of his job.

“It takes away the right I have in my religious tradition to do something important in my faith,” he said –“to marry people.”