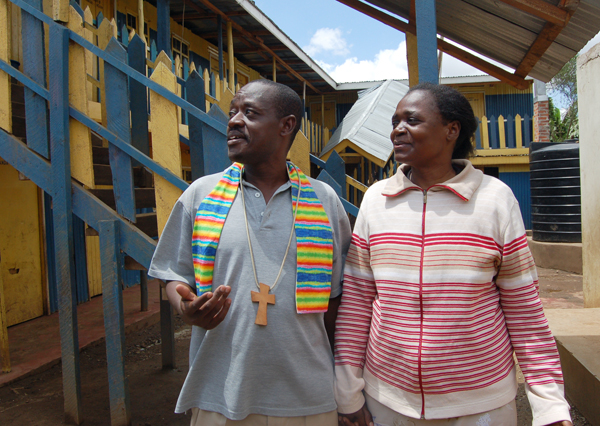 The Rev. John Makokha, founder and senior pastor at the Riruta Hope Community Church, and his wife, Anne Baraza, inside the compound of the church. Religion News Service photo by Fredrick Nzwili

NAIROBI, Kenya (RNS) Down a muddy path, sandwiched between residential homes in this city’s northwest slum, is a simple timber and sheet metal structure that welcomes not only the lowly but the outcast: Nairobi’s gays and lesbians.

Its pastor, the Rev. John Makokha, is risking his vocation and reputation by welcoming them to his church. But alarmed by the number of clergy resorting to hate, oppression and discrimination against gays and lesbians, Makokha feels he has no choice.

He has flung open the doors of the Riruta Hope Community Church and even had a rainbow flag conspicuously painted on the church marquee.

Kenya has not gone as far as Uganda and Nigeria, countries that have recently adopted harsh legislation outlawing homosexuality and calling for life imprisonment for some homosexual acts.

Still, the Kenyan penal code regards homosexuality as a crime and Christian and Muslim clergy have spoken clearly and forcefully against it.

In this environment, Makokha ministers to sexual minorities and counsels family members who find their loved ones’ sexual orientation disturbing. His passion is to see an end to what he calls “religious homophobia.”

“Gays and lesbians are children of God and created in his image,” Makokha said. “They should be accepted and affirmed as such. They deserve a place to worship and serve God.”

Peter, a gay man who works as a pharmacist, attends the church, one of the only places where he feels he can be himself. He asked that his last name not be used for fear of retaliation.

“When I am down and I need encouragement, counseling and spiritual nourishment, I go to Makokha’s church,” he said. “There is that personal touch and connection. There is someone I can talk to rather than the condemnation I would get in other churches.”

Makokha, 44, a is not intent on ministering only to gays and lesbians. He also wants to reach out to other religious leaders.

To that end, he runs educational awareness seminars on human sexuality and gender identity. The programs are provided through an organization he founded, the Religious and Sexuality Institute of Kenya (formerly Other Sheep Kenya).

“We want the people to understand the controversy and the dialogue around the issue. We look at the role of science in sexual identity and sexuality. We have found out that many people are very ignorant about homosexuality,” he explained.

The seminars are opening the eyes of the religious leaders, he said, citing admissions by the clerics that they have learned something unique that theological colleges do not offer.

A former public school teacher, Makokha first encountered gays in his classroom. One such student committed suicide in 1995, after the school kicked him out because of his sexual orientation. That experience set Makokha on a journey to help gays.

At the Nairobi Evangelical School of Theology, where he earned an M.A. in 2004, he found pastors struggling with their sexuality.

But around 2005, the UMC leadership began demanding that he stop ministering to gays and lesbians. They accused him of going against the Bible and cut off his funding. He finally left the denomination and established his own church in 2011.

“God is love and we cannot say as Christians we are practicing that love, when we are closing doors for persons who are created in his image,” said the pastor, a father of four.

As often happens, his words have fallen on deaf ears.

Many, such as the Rev. Titus Makusi Ingabo, who worked with Makokha as assistant pastor during his days with the United Methodist Church, said ministers should help steer gay people toward straight lives.

“We’re charged with the responsibility and mandate to help them come back to God,” he said. “Sex and sexuality have been abused. Homosexuality, being gay and lesbianism … all these are sins and must not be encouraged to continue.”

Such sentiments do not discourage Makokha, who hopes his peers will someday relent.

In his seminars, he points out the Bible’s limitations when it comes to human sexuality, a subject that was not well understood at the time the Scriptures were composed.

“It may not be able to answer all the questions of science,” he said of the Scriptures. “I believe we need to go back to the Lord and say there is new information which is coming in which we can use in the Bible to empower people.”