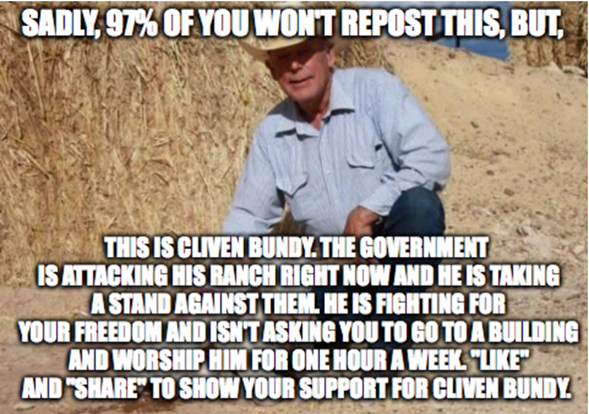 Meme in support of Cliven Bundy. (And no, I didn’t “like” or “share” it, except in this most ironic way.)

I found out this morning that Cliven Bundy, the Nevada rancher whose standoff with the federal government over cattle grazing rights has become national news, is Mormon.

This unwelcome revelation is more than enough to make a good Mormon swear.

According to ABC News:

Bundy, a 67-year-old patriarch of a large Mormon family with over 50 grandchildren, first came into the spotlight when the federal government started impounding his 900 head of cattle in early April, following a 20-year battle over cattle-grazing on federal land.

Bundy became a darling of the Right in early April when he denounced the federal government’s ownership of the land on which he grazes his cattle.

But supporters such as Glenn Beck and Rand Paul began to distance themselves last week as media reports came in about alarmingly racist comments made by the Nevada rancher:

“And because they were basically on government subsidy, so now what do they do?” he asked. “They abort their young children, they put their young men in jail, because they never learned how to pick cotton. And I’ve often wondered, are they better off as slaves, picking cotton and having a family life and doing things, or are they better off under government subsidy? They didn’t get no more freedom. They got less freedom.”

Leaving aside the obvious hypocrisy (this guy criticizes African Americans for receiving “government subsidy” when he has been grazing his cattle on government land for free for 20 years?), this statement is so racist and disturbing that it beggars belief. Black people would be better off as slaves? WTF?

When Glenn Beck says on his blog that he has had to distance himself from a right-wing, racist militiaman because his comments were too extremist, that should be a clue that Cliven Bundy has taken the express bus to Crazytown and did not pass Go.

And the guy is Mormon. Well, that’s just terrific.

But if there’s a silver lining it’s this: The press has not jumped on this part of the story.

I’m surprised, and grateful, that we haven’t seen more people making assumptions that just because Bundy is Mormon that it’s further proof that, as one idiotic commenter put it, “Mormons are known to be racists. They believe AA to be inferior. How they deny that bullshit like RMoney did? Its a known fact…Mormon=Racist!!!” (This commenter appears to have taken the same great pains that Bundy has in mastering the English language.)

Maybe, just maybe, Mormons are becoming mainstream enough that the M word is not the first thing journalists have to attach to a person’s profile the moment he says or does something monumentally stupid.

Maybe, just maybe, people will remember that Harry Reid, that Democratic senator from Nevada, is a Mormon, as is Glenn Beck, bless his little Grinch-sized heart, and millions of other people at every range of the political spectrum.