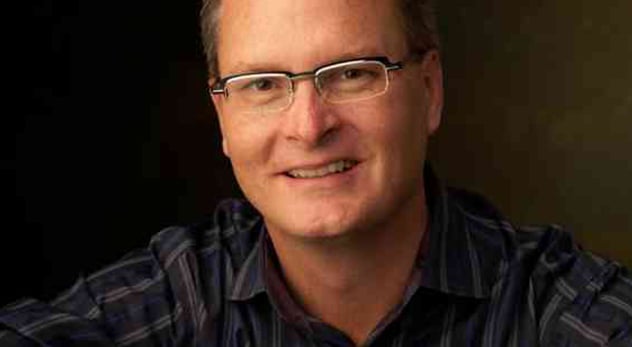 The pastor of the largest United Methodist congregation in America is sparking intense debate with his provocative new take on the Bible. – Image courtesy of Adam Hamilton

As pastor of Church of the Resurrection, Adam Hamilton has the honor of leading the largest United Methodist congregation in the United States. More than 8,600 attend services each week, and the Kansas congregation is considered by many to be America’s most influential mainline Protestant church. But with the release of his provocative new book, “Making Sense of the Bible: Rediscovering the Power of Scripture Today,” Hamilton is becoming known as someone who is challenging traditional understandings the Bible.

Here we discuss the message of his book and how he navigates the most difficult and debated passages.

RNS: You believe the Bible is divinely “inspired.” Can you explain what you mean exactly?

AH: The biblical authors were people like us. Christians do not hold, as Muslims do, that our holy book was dictated by God. The biblical authors wrote in particular times, for particular audiences, out of a particular context. Part of rightly interpreting Scripture is reading it in the light of what we can know about its historical and cultural context, the author’s purposes in writing and knowing something about the people they were writing to.

In 2 Timothy 3:16 Paul writes, “All Scripture is inspired by God…” Christians often assume they know what this means, but Paul seems to have created the word “inspired.” It does not appear in the Greek language before this and is used nowhere else in the Bible. It literally means “God-breathed” but Paul doesn’t go on to explain precisely what he means. It is a metaphor, and metaphors are not precise. Push them too far and they break down.

When I think of inspired, I think of God-influenced. This leaves open a variety of ways in which the biblical authors were influenced by God.

RNS: A lot of critics reject the Bible because of the violence in the Old Testament. What say you?

My premise is that the Bible is the words of people who were influenced by God, and yet who were also shaped by the times in which they lived. The violence attributed to God in the Bible is a serious issue that Christians must address. It is inconsistent with the character of God described in many places in the Old Testament, and certainly inconsistent with the Word of God revealed in Jesus Christ who calls his followers to love their enemies.

In the Hebrew Bible we find God putting to death 70,000 Israelites to punish David for taking a census. We have God commanding Joshua to slaughter every man woman and child in 31 entire kingdoms in the Canaan as a kind of offering to God. This is what, today, we would call genocide. God commands priests to burn their daughters alive if they become prostitutes. I cannot imagine God calling me to burn one of my children alive, regardless of what they had done. Other ancient near eastern people believed their gods also called them to slaughter entire cities as an offering to their gods, so this seems to have been a common cultural understanding about the relationship between war and the gods.

RNS: Theologian J.P. Moreland once argued that among evangelicals, “There is an over-commitment to Scripture in a way that is false, irrational, and harmful to the cause of Christ.” What do you think about his assertion?

RNS: I suspect your chapter on homosexuality will rankle a few feathers, particularly among conservatives. Can you summarize your position and why you believe it is a scriptural one?

AH: I offer two different arguments regarding homosexuality in my book. In the first, I suggest that what Moses and Paul were addressing in their teachings on same-sex intimacy was very different from two human beings entering into a covenant relationship of mutual love.  In the entire Old Testament we find only two expressions of same-sex intimacy: Gang rape and pagan temple prostitution. This is not at all synonymous with two people entering into a lifelong covenant relationship with one another.  In the New Testament, Paul, trained in rabbinic law, seems to draw upon all of these ideas in his words about same-sex intimacy in Romans where he uses the Old Testament terms of clean and unclean and where he speaks of same-sex intimacy in connection with idolatry.

But the second argument I make is that the Bible is complex and, while influenced by God, it is not dictated by God.  It reflects the humanity of the biblical authors and the times in which they lived.  We’ve seen this in its teaching on slavery, on violence, on the status and role of women, and several other topics. Thus, I suggest, it is possible to be a faithful Christian who loves God and loves the scriptures and at the same time to believe that the handful of verses on same-sex intimacy are like the hundreds of passages accepting and regulating slavery or other practices we today believe do not express the heart and character of God.

RNS: You say that for those who disagree on homosexuality, the issue is not Biblical authority, but Biblical interpretation. Explain this.

AH: Most conservatives, moderate evangelicals and progressives I know believe that the church is to love gay and lesbian people.  And nearly all agree, at core the issue is not homosexuality but the Bible. God did not rewrite, edit or send down from heaven a new Bible that clarified that God was against slavery. There are over 200 verses allowing and regulating the practice in the Bible.  Yet somehow Christians were able to look at those verses and ultimately conclude they did not reflect God’s will for humankind despite verses directly attributed to God that allowed for owning, selling and even beating slaves.

Conservatives often suggest homosexuality is an issue of biblical authority. I believe the Bible has authority in my life and for the church and, in the words of II Timothy 3:16, it is, “useful for teaching, for reproof, for correction, and for training in righteousness, so that everyone who belongs to God may be proficient, equipped for every good work.” But I also believe that the five passages that speak to some form of same-sex intimacy do not describe God’s timeless will for humanity any more than the passages on violence, or slavery, or women describe God’s timeless will. The issue is not authority, it is our assumptions about the Bible and the way we interpret it.

RNS: What do you say to those who would accuse you of just rehashing the arguments of 20th century theological liberalism? What is new here?

AH: My book is less about rehashing old arguments, than offering an accessible way of understanding both the Bible’s divine inspiration and its humanity. I share the kind of things any seminary student in a mainline or moderate evangelical seminary would learn in their first year, but most lay people may not be aware of. Often both laity and clergy speak of the Bible in terms that are not ultimately helpful in making sense of its difficult passages, and can actually lead to misunderstanding the Bible.

RNS: Your book might be characterized as provocative or progressive. Do you think it is also hopeful?

AH: Yes. I wrote the book for young adults who have been turned away from faith by things they’ve read in the Bible. I wrote it to help Christians who are increasingly confronted by vocal atheists who love to focus on the Bible’s more difficult passages.  And I wrote it for people who are interested in reading the Bible and understanding its message. That is a message of great hope.