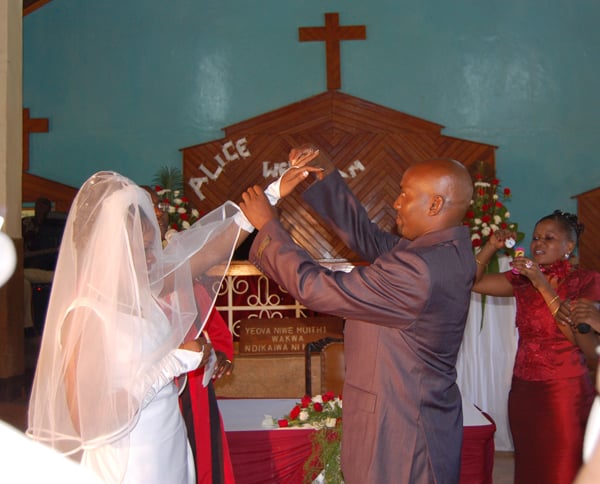 A young man places a ring on the finger of his bride during a wedding in Kenya. RNS photo by Fredrick Nzwili
May 1, 2014
Fredrick Nzwili 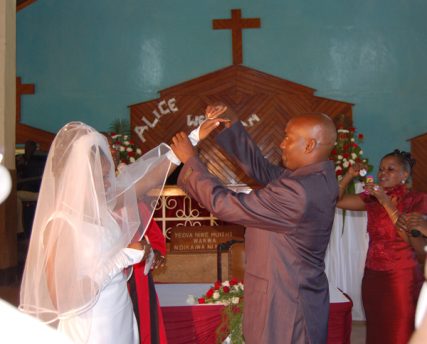 A young man places a ring on the finger of his bride during a wedding in Kenya. RNS photo by Fredrick Nzwili

NAIROBI, Kenya (RNS) Christian clergy fear that a new marriage law signed by President Uhuru Kenyatta on Tuesday (April 29) will tear families apart and weaken the church and the nation.

The law legalizes polygamy, allowing men to marry multiple wives in a country where they previously were permitted to have one. Parliament passed the measure in March, after an amendment was added that allows a man to take another wife without informing his existing wife.

Christian leaders said the law would dilute the principle of holy matrimony. They had united to urge Kenyatta to reject the law, but with the signing this week, the clerics expressed their frustration.

“We are very unhappy,” said the Rev. David Gathanju, moderator of the Presbyterian Church of East Africa. “Having met the president over the bill, we didn’t expect him to sign it.

“If polygamy is allowed, it will open the floodgates for all sorts of separations and divorces. That will surely hurt the family institution and the country at large will suffer,” he added.

Under the new law there are five types of marriages in Kenya: Christian, Islamic, Hindu, monogamous and polygamous. Kenya is predominantly Christian, with Muslims making up about 11 percent of its population, mostly along the Somali border, its coastal region, and in cities such as Mombasa.

“I think the law will cause more problems and confusion than it would solve,” said Bishop Joseph Methu, leader of the Federation of Evangelical and Indigenous Christian Churches of Kenya. “We now begin a journey to see how it can be amended. I don’t think it’s good for us.”

Muslim leaders backed the law, saying polygamy is found in the Bible and in the Quran, so it’s not much of an issue.

“I commend the president. I don’t think this is about faith since figures in the Bible were polygamous,” said Sheikh Juma Ngao, the Kenya Muslim National Advisory Council leader. “Those who can maintain more wives should be able to marry.”

The law sets a minimum age of marriage at 18. It also allows wives a 50 percent share of the property acquired during the union, among other benefits.