Eyal Sherman at age 18 in his painting clothes. He paints by holding a brush between his teeth. Photo courtesy of Charles S. Sherman

SYRACUSE, N.Y. (RNS) Rabbi Charles S. Sherman has not heard his son’s voice for 28 years. Since suffering a stroke after surgery to remove a brain tumor, Eyal Sherman has not been able to breathe, eat or walk on his own.

Sherman, 69, writes about his journey dealing with a severely disabled son and the faith that sustained him in “The Broken and the Whole: Discovering Joy after Heartbreak.”

Published in March, the book describes the relentless physical work of treating Eyal at home, the family’s determination to give him a normal life and the way the family found joy amid great pain and despair.

The book’s title refers to the story in the Book of Exodus when God instructs Moses to carve a second set of tablets for the Ten Commandments to replace the ones he had destroyed. Both sets of tablets — the broken and the whole — are placed in the Ark of the Covenant. 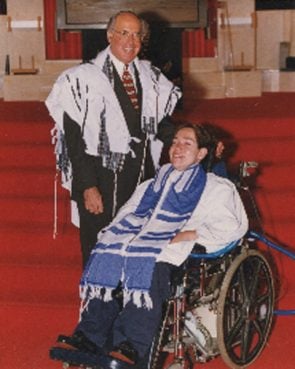 Everyone carries pieces of brokenness alongside wholeness, Sherman said.

“That, to me, is the essence of faith and the meaning of life,” Sherman said. “The challenge is to negotiate the journey with the broken pieces in your life. We all have to live in that zone of complexity. As bad as your life is, you can find joy.”

Sherman has served as rabbi of Temple Adath Yeshurun, a Conservative synagogue in Syracuse, since 1970. He and his wife, Leah, have five children, two of whom are rabbis. Eyal, who turns 33 on Saturday (May 3), lives with his parents.

“Instead of a tome of religious platitudes, this book is an example of sometimes hard won humility and faith that speaks to the human experience of struggling to accept life circumstances that are not necessarily of our choosing,” wrote the Jewish Book Council in its review.

The Shermans were expecting their youngest child in March 1985 when Eyal, then 4, became ill. Doctors found he had a lesion the size of a golf ball intertwined in his brain stem. They gave the boy a year to live.

The couple refused to give up, and found a New York City surgeon to operate on Eyal. The surgeon removed most of the lesion, but a few days later, Eyal suffered a brain-stem stroke and slipped into a vegetative coma. 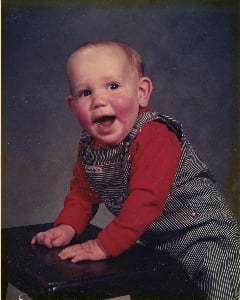 He awoke four months later. Eyal retained his intellectual abilities, but he was a quadriplegic, dependent on a ventilator to breathe.

Renovating their home to accommodate medical equipment; organizing round-the-clock care, and endless negotiations with insurance companies and school officials could easily have consumed the family. But the Shermans had four more children to rear, and the rabbi had a demanding job at the synagogue.

Sherman said focusing inward would have been a mistake. A synagogue, he pointed out, must have windows so the congregation can look out.

“So many people in these situations will wrap themselves up and wrap themselves away from the world,” he said. “You’ve got to engage with the rest of the world. There’s some pretty good stuff out there.”

Sherman writes in a matter-of-fact tone, but he tears up several times while talking about his son. Piles of books and many family photos, including one of an energetic Eyal as a toddler, fill his synagogue office. On the wall are paintings of large, colorful flowers. Eyal created them, holding a paintbrush between his teeth.

The book includes heartbreaking, intimate glimpses into their life. There was the first time the family took Eyal in a ride around the neighborhood, propped up with pillows and blankets in their station wagon. In 2000, a blood infection caused so much pain that Eyal ground his teeth into his gums. When Eyal turned 16, Sherman gave him a red toy Corvette with a remote control and told him, “This is the car I am going to buy you someday.” 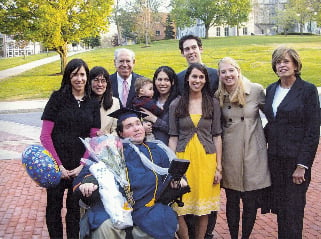 Eyal Sherman with his family after his Syracuse University graduation in 2009. Photo courtesy of Charles S. Sherman

Asher Greenhouse, a 30-year member of Sherman’s congregation, said the rabbi and his wife have never hid the family’s challenges.

“Eyal’s always facing medical challenges,” Greenhouse said. “It’s one thing after another. It’s a tough situation, but they respect his quality of life. They’ve been advocates of that.”

Eyal attended public schools in Syracuse and graduated from high school in 1999. When he made his bar mitzvah in 1994, the synagogue bent the rules barring technology on the Sabbath. Video cameras in the sanctuary projected Eyal’s image on a screen, and the congregation read his lips as he voiced the prayers.

Leah Sherman attended classes at Syracuse University alongside her son, taking notes and helping him navigate the campus. Eyal graduated in 2009 with a degree in fine arts.

“In Judaism, you are created in the image of God,” the rabbi said. “Everyone has in them a piece of the divine.”

“The promised land for me would be that my kid, with medical technology, finds a magic bullet,” he said. “I want to hear his voice again.”

Had Eyal not fallen ill, Sherman is sure he would have joined what he calls “the family business.”

“Of all the kids, he would have been the best rabbi of all,” Sherman said. “When I would bring him to services, he had great people skills. He was engaged, bright, focused.”

But Sherman doesn’t indulge in that line of thought. Instead, he turns often to Psalm 118: “This is the day that the Lord has made. We will rejoice and be glad in it.”