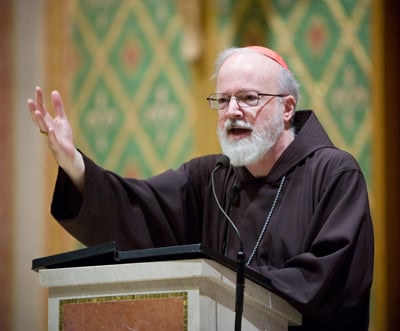 Boston Cardinal Sean O’Malley on Sept. 2, 2009, defended his attendance at the funeral of Sen. Ted Kennedy.

“Many don’t see it as a problem of the universal church,” said O’Malley who heads the Vatican’s new commission for the protection of minors.

“In many people’s minds it is an American problem, an Irish problem or a German problem,” he said. “The church has to face it is everywhere in the world. There is so much denial. The church has to respond to make the church safe for children.”

O’Malley, whose Boston archdiocese was at the center of a wave of sex scandals that rocked the church a decade ago, addressed the media after the panel’s eight members held its first meeting in Rome.

Pope Francis announced the creation of the new committee in March. It includes Irish abuse victim and campaigner Marie Collins and two psychiatrists. But the committee is expected to expand to represent every continent around the world.

“We wish to express our heartfelt solidarity with all victims/survivors of sexual abuse as children and vulnerable adults,” O’Malley read from a prepared statement.

“We will propose initiatives to encourage local responsibility around the world and the mutual sharing of ‘best practices’ for the protection of all minors, including programs for training, education, formation and responses to abuse.”

Collins, who was sexually abused by a priest at age 13, said she, too, had been “shocked” by the denial she had witnessed among some Catholic bishops about the extent of clerical sexual abuse.

“…They truly believed it only happened in certain countries,” she said.

The committee met as the Vatican is about to face fresh scrutiny from a United Nations panel on torture in Geneva this week.

In February, a U.N. committee on the rights of the child denounced the Vatican for adopting policies that allowed priests to sexually abuse thousands of children and called for known and suspected abusers to be immediately removed.

Francis strongly rejected the report’s findings, saying that no other organization had done more to fight pedophilia and the church had acted with “transparency and responsibility.”

The pope recently said he took personal responsibility for the “evil” of clerical sex abuse, sought forgiveness from victims and said the church must do more to protect children.

Collins said that while she had “difficulty” with the pope’s claims that the church had done more than any other institution to act on abuse, s

he said she believed the church was moving forward, but stressed that the effort was still in its “early days.”