(RNS) The Supreme Court Monday (May 5) declared that the Constitution not only allows for prayer at government meetings, but sectarian prayer. 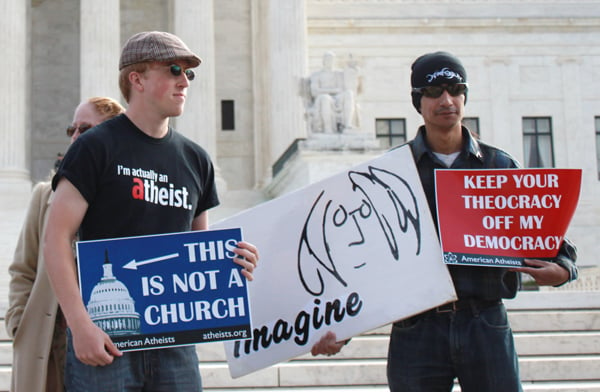 Demonstrators hold signs that read “Keep your theocracy off my democracy” and “This is not a church” in front of the Supreme Court on Nov. 6, 2013 during oral arguments of Greece v. Galloway. RNS photo by Katherine Burgess

Writing for the 5-4 majority, Justice Anthony Kennedy held that the town of Greece, N.Y., did not violate the Constitution’s Establishment Clause, which forbids the government from endorsing a religion — by sponsoring clergy who delivered sectarian prayers.

“To hold that invocations must be non-sectarian would force the legislatures sponsoring prayers and the courts deciding these cases to act as supervisors and censors of religious speech,” Kennedy wrote for himself and the conservatives on the court.

Lawmakers and judges would otherwise have to police prayer, he wrote, involving “government in religious matters to a far greater degree than is the case under the town’s current practice of neither editing nor approving prayers in advance nor criticizing their content after the fact.”

Justice Elena Kagan, writing for the dissent, called the decision out of sync with American society. One First Amendment legal expert called it a “bad decision” that could lead to marginalizing followers of minority religions in their own hometowns.

Not suprisingly, the victory for the town of Greece case buoyed Christian conservatives and others who feel that religious expression has been overly curtailed in public settings.

“Prayers like these have been taking place in our nation’s legislatures for over 200 years,” he said. “They showcase our nation’s religious diversity, highlight the fact that religion is a fundamental aspect of human culture, and reinforce the founding idea that our rights come from the Creator — not the legislature.”

Family Research Council President Tony Perkins cheered the decision saying, “The court has rejected the idea that as citizens we must check our faith at the entrance to the public square.” Susan Galloway, a resident of the town of Greece, N.Y., who filed a lawsuit against the town, speaks to the media after oral arguments at the Supreme Court in Washington, D.C., on Nov. 6, 2013. RNS photo by Katherine Burgess

The decision, signed by five Catholics, disappointed the Jewish and atheist women who filed suit against the town, and their supporters. They had contended that prayers at town council’s meetings — many of which invoked Jesus and the Holy Spirit — excluded non-Christians. They argued that many who came to petition the council had to either go along with the prayers, and bow their heads in seeming agreement, or present themselves as visitors in opposition to the clergy and the government officials who had invited them.

Edwina Rogers, executive director of the Secular Coalition for America, said it was very disappointing that the court “chose to ignore the very blatant burden sectarian prayer imposes on the conscience of citizens with diverse religious beliefs and those without religious beliefs.”

Kagan spelled it out in her dissent:

“No one can fairly read the prayers from Greece’s town meetings as anything other than explicitly Christian — constantly and exclusively so. The prayers betray no understanding that the American community is today, as it long has been, a rich mosaic of religious faiths.”

Daniel Mach, director of the ACLU Program on Freedom of Religion and Belief, said, “We are disappointed by today’s decision. Official religious favoritism should be off-limits under the Constitution. Town-sponsored sectarian prayer violates the basic rule requiring the government to stay neutral on matters of faith.”

Ira Lupu, a law professor emeritus at George Washington University who specializes in the First Amendment, said the ruling “effectively did away with decades of understanding” on how to deal with prayer in state, city and school board meetings.

“In past cases, legislative groups that consistently prayed in Jesus’ name lost. But if they tried to make some reasonable effort to have a diverse or pluralistic pattern of prayer, they won. It was the pattern that mattered,” he said.

The Monday decision “does away with that. It does not insist on any such reasonable effort to make prayer nonsectarian or to push for diversity. The majority faith in a particular community can dictate the prayers and minority faiths could be left out if they don’t step up and say, ‘Hey, what about us?’”

Consequently, said Lupu, “a town or a city can effectively identify itself with a particular religious tradition. I think that is what establishment of religion is supposed to prevent. That’s why I think it’s a very bad decision.”

“What might be surprising, though, is that four justices dissented. It would have been a dramatic and controversial move … to rule that legislative prayers are necessarily unconstitutional,” Garnett said.

But Garnett also said, that just because sectarian prayers are constitutional, doesn’t mean that policies like those of the town of Greece “are wise or welcoming.”

News
With Roe teetering, religious activists on both sides flock to the Supreme Court
Follow us on Facebook!
Submit your photos to RNS