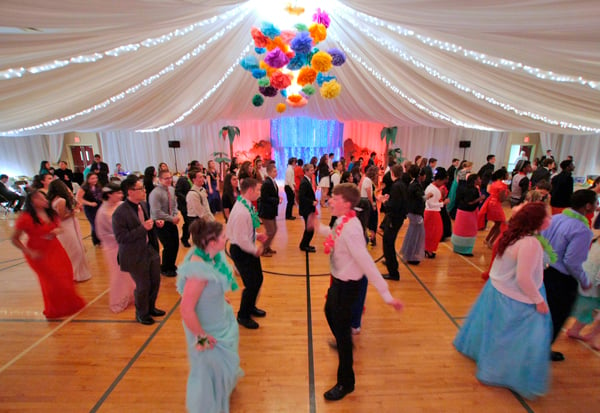 Young adults maintain a respectable distance as they dance during a Mormon prom at The Church of Jesus Christ of Latter-day Saints in Morristown, N.J. The goal of this prom is to practice modesty and keep costs low. It encourages wholesome conduct and dress and is free to attend. Photo by Tony Kurdzuk, courtesy of The Star-Ledger
May 13, 2014
Janelle Griffith

Young adults maintain a respectable distance as they dance during the "Mormon Prom" at the Church of Jesus Christ of Latter-day Saints in Morristown, N.J. The goal of this prom is to practice modesty and keep costs low. It encourages wholesome conduct and dress and is free to attend. Photo by Tony Kurdzuk, courtesy of The Star-Ledger

(RNS)  Hundreds of teens from North Jersey gathered in Morristown on Saturday (May 10) for a night celebrating modesty -- the eighth annual "Mormon Prom."

The event -- open to any students ages 16 to 18, regardless of religious affiliation -- was unlike most hosted by high schools across the state.

For starters, its organizers traded a pricey venue for a transformed basketball court at the Church of Jesus Christ of Latter-day Saints in Morristown.

The prom was also free to attend, but under one stipulation: Teens were required to sign a pact agreeing to dress and behave modestly, to dance "appropriately" and to abstain from using alcohol or drugs.

"This prom is unique in that it emphasizes wholesome conduct and dress," said Marcia Stornetta, director of public affairs for the Morristown Church of Latter-day Saints.

But, she insists, it's not at the expense of fun.

"There is no pressure to do anything immodest or reckless, like party or drink afterwards," said Anna Jensen, a junior at Ramsey High School who attended the dance. "The music was clean and the dancing was also clean. Overall, it was just a group of kids, Mormon or not Mormon, that wanted to enjoy themselves without being influenced by what our modern society believes to be the norm."

The nearly 300 students abandoned several conventional prom practices -- including arriving in limousines and wearing expensive outfits. (Organizers encourage attendees to be modest in their spending as well.) Most were dropped off by their parents, and some of the girls swapped or borrowed dresses to keep down the cost.

Because some of the students came from long distances (students from New York and Connecticut have attended in the past) and were driven to the event, there was a "parents room" where adults could socialize during the prom.

Some students attend the Mormon Prom in lieu of their high school prom, while others, such as Anna, go to both.

"They are both equally fun, but the standards for Mormon Prom are different than school prom," Anna said.

"The standards that are given to the youth such as dancing without intimate contact, and listening to clean music, are all things that I choose to follow because they help keep me safe, as well as help me to enjoy the dance more without being distracted by things that really should not be the focus," she said. Anna, who is Mormon, brought two friends who are Catholic to the dance.

Matt Norton, 16, is a junior at Morristown High School and a member of the Church of Jesus Christ of Latter-day Saints in Morristown.

"I'm going to my school prom in May," he said. "The types of dancing and music will be very different. It will be more inappropriate at the school prom."

The Mormon Prom began after Latter-day Saint students complained to their parents about the dances at their high schools.

Cindy Manchester, of Pompton Plains, was a local Latter-day Saint youth leader in the Caldwell congregation who listened to several teens in her area, including her daughter, Danielle, raise concerns about the immodest dress, profanity, lewd behavior and excessive spending at their high school proms.

Manchester partnered with Heidi Elton, a youth leader from the Short Hills congregation, whose daughter shared the same concerns. The two mothers joined forces to create an alternative prom with a more wholesome environment. They went to their church leaders, who approved the plan, and the inaugural Mormon Prom was held in Morristown in 2006. The event is sponsored entirely by Mormon churches from across the state.

"The Mormon Prom values just help keep the focus of the dance on having fun and enjoying a good night out with friends," Anna said.

(Janelle Griffith writes for The Star-Ledger in Newark.)