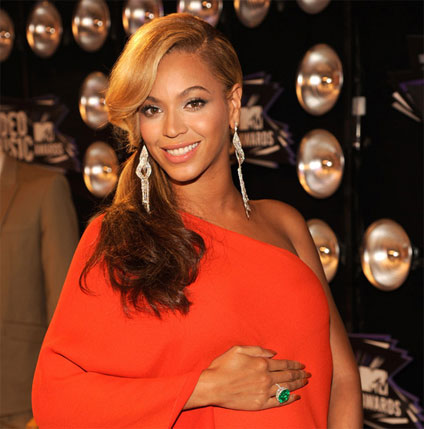 First came Yeezianity. Now, just in time for Kanye and Kim's wedding, a new religion has sprung up. Get ready to worship at the feet--if you aren't already doing so--of Beyoncé. The National Church of Bey, founded by a group of twelve friends in Atlanta, just released their first commercial inviting the skeptics among us to worship with them...

Although Yeezianity still has the corner on being THE BEST CHURCH OF ALL TIME!!!!!, Beyism, as the religion is known, is growing in popularity. There have been radio interviews and satirical web posts about Beyism, but soon enough there will also be a temple (they broke ground May 6th, according to the website). Another online statement, lamenting the spread of "false information," shares the worshipers' message of reverence. Much like Yeezianity's esteem for its central figure (whose name is barred from being spoken), Beyism holds Beyoncé as the apex of human creativity and divinity:

We ask that you consider what is more real; an invisible spirit on high, or a walking, talking, breathing Goddess who shows you her true form daily. Beyonce’s spirit is entrancing. We know that she was sent to this place to spread love, peace, and joy. While we do not believe Beyonce to be the Creator, we recognize that she still sits among the throne of Gods....As Beyonce spreads her gospel through song and dance, her message  provides uplifting, loving, and many times real-life happenings. We humbly ask you to respect our beliefs, just as you want those to respect yours. Open your mind to new possibilities and you will see, just as we did, that Bey is a true higher power. Surfbort!

Beyonce at the 2013 VMAs. Picture by mp3waxx via Flickr (http://bit.ly/RdVTQl)

Followers of Beyism have even assembled a Beyble; a collection of Beyoncé's words and song lyrics that will, according to the website, be available soon for public consumption. It's hard to know what to make of such devotion. On the one hand, it's easy to find it silly, and it is silly in some ways. Beyoncé is just a person--albeit a stunningly beautiful, collected, talented one. Worshiping her makes as little sense to me as worshiping Kanye or Alan Greenspan or Alice Munro. On the other hand, plenty of religions look silly on their face. If someone framed Christianity by saying that I worship a dead carpenter who claimed to heal sick people and ascended from the earth into heaven, without taking any attendant details into consideration, I would have to concede that it sounds pretty silly, too. It remains unclear just what Beyoncé-worship entails, although once the temple is built the weekly hymns are sure to be off the hook. And the parallels between Beyism and Christianity are not lost on me. This is a very Lincoln-Kennedy situation: - Both started with a group of twelve - Beyism began in Atlanta, the "Jerusalem of the 21st century*" * I just made that up - The spokesperson for Beyism is named Pauline. The most famous spokesperson for Christianity outside of its founder was named Paul. - "Amen!" and "Surfbort!" both have the same number of syllables Whatever the future of Beyism, I do have one hope: Please let Bey officiate the upcoming Kimye wedding.

Related Posts
By Adelle M. Banks
Beyoncé Mass replaces hymns with ‘Survivor’ and ‘Flaws and All’
By Emily McFarlan Miller
Beyonce, Chance the Rapper, A Tribe Called Quest bring religion to Grammys
By Kimberly Winston
Court to spaghetti: You are not a god
By Jeffrey Salkin
Why Tennessee should love the Bible
By Mark Silk
The Year of the Nones