DURHAM, N.C. (RNS) Jewish cemeteries are not typically places where ashes are interred, but in a rare ceremony on Sunday (May 25), a small rock consisting of pressed human ashes was placed in a wooden box and lowered into a deep grave as some 200 mourners looked on. 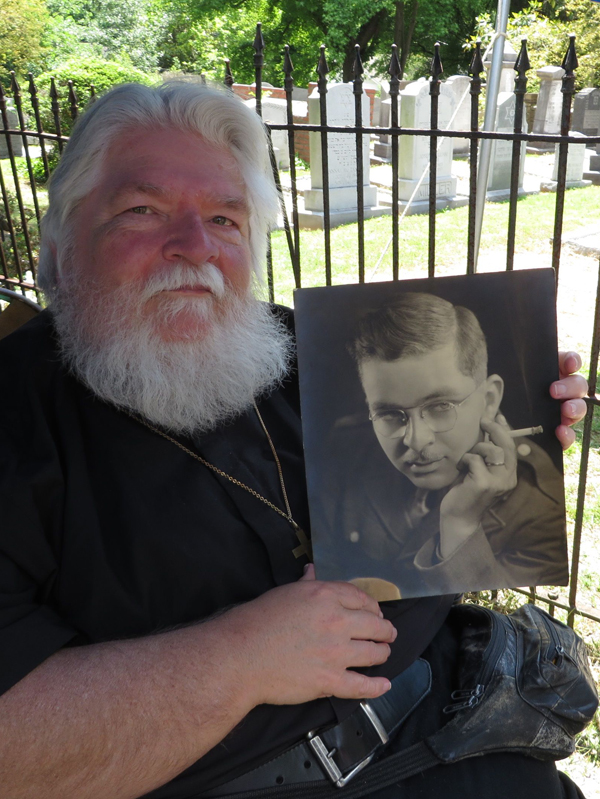 (RNS) Joseph Corsbie holds up a photo of his father, David Walter Corsbie Jr., who came into possession of ashes from the Dachau concentration camp during his military service. RNS photo by Yonat Shimron.

The ashes were handed to a North Carolina soldier who toured the crematorium at the Dachau concentration camp in Germany shortly after it was liberated by American troops in 1945.

Their journey from Dachau to Dobson (a small town north of Winston-Salem) to Durham is a remarkable story of a soldier’s witness to the atrocities of the Holocaust and his son’s commitment to finding them an honorable resting place.

Under sunny skies and in the presence of the mayor and representatives of the Veterans of Foreign Wars, two rabbis sang Psalm 23 in Hebrew and delivered a short eulogy for the unknown person or people whose ashes were buried.

“We do not know if they are the ashes of a scholar or a silversmith, a homemaker or a physician,” said Rabbi Jen Feldman of the Kehillah Synagogue in nearby Chapel Hill. “Their identity or identities, the stories of their life or their lives, are silent to us.”

Nevertheless, the ashes are reminders “of the infinite value of each human life,” added Rabbi Daniel Greyber of Beth El Synagogue in Durham.

The hourlong ceremony at the Durham Hebrew Cemetery, one day before Memorial Day, was also an opportunity to honor a Word War II serviceman and bring together a handful of Holocaust survivors living in the region.

Plans for the burial ceremony began around Thanksgiving when a niece of David Walter Corsbie Jr., the World War II serviceman, met with a member of Chapel Hill-Durham Holocaust Speakers Bureau at a local Starbucks.

Over a cup of coffee, the niece, Mirinda Kosoff, related her uncle’s story and pulled out a 2-inch by 2-inch clear plastic box with the caked ashes, which she placed on the table. “It was surreal,” said Sharon Halperin, the speakers bureau representative. “I felt so honored she was handing it to me. It was almost like a precious treasure.”

The uncle’s son, Joseph Corsbie of Dobson, N.C., had been searching for a dignified repository for the ashes, which he inherited from his father. Now 62, unmarried, and with no children, Corsbie suffers from a heart condition and is increasingly immobile.

He had known about the ashes since he was a boy, but only understood their true significance around the age of 13 or 14, when he goaded his father into telling him his wartime experiences and showing him his medals and souvenirs.

“All my friends, their families had great war stories,” said Corsbie. “I wanted to hear some kind of story.”

A courier for the 364th Fighter Squadron of the Army Air Corps, the elder Corsbie was stationed in Munich and sent to Dachau in the spring of 1945 to deliver some papers. The concentration camp was established by the Nazis on the grounds of an abandoned munitions factory about 10 miles northwest of Munich. It held 188,000 prisoners between 1933 and 1945. At least 28,000 people were murdered there, possibly thousands more, many of them cremated at the crematoria established on site to dispose of human remains.

As the elder Corsbie arrived, a former Dachau prisoner met him and gave him a tour. He then handed him a chunk of ashes and told him never to forget what happened there.

“My dad was horrified by what he saw,” said Corsbie. “All he could do was shake and cry when he told me about it.”

For years, the elder Corsbie held onto the ashes in a metal cigarette case. When he died in 1986, his son inherited it. 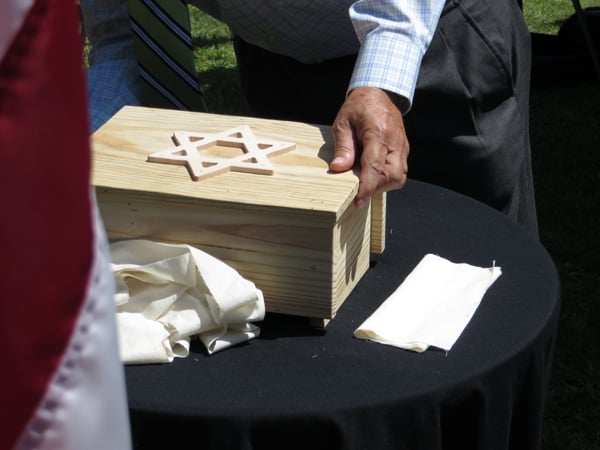 (RNS) a member of Beth El Synagogue in Durham, N.C., built a plain pine box with a Star of David to contain the ashes of Holocaust victims that were recovered from the Dachau death camp at the end of World War II. RNS photo by Yonat Shimron.

A few years ago, the younger Corsbie, who worked as a security guard and was recently ordained by a nondenominational church movement of ex-Catholics, began to wonder what would happen to the caked ashes when he was gone.

So he asked his cousin, Martha Kossoff, to take it to the U.S. Holocaust Memorial Museum near her home in Washington. She did, but was told the museum does not accept human remains.

Kossoff then asked her sister, Mirinda, to see if she could find a solution to the ashes. Mirinda Kossoff, a writer and jewelry maker who lives in Durham, called Feldman, the Chapel Hill rabbi. That rabbi put her in touch with the Holocaust Speakers Bureau and with Halperin.

Halperin’s husband, Dr. Edward C. Halperin, is the chancellor of New York Medical College, and had the ashes tested by the New York chief medical examiner who concluded they were human ashes. 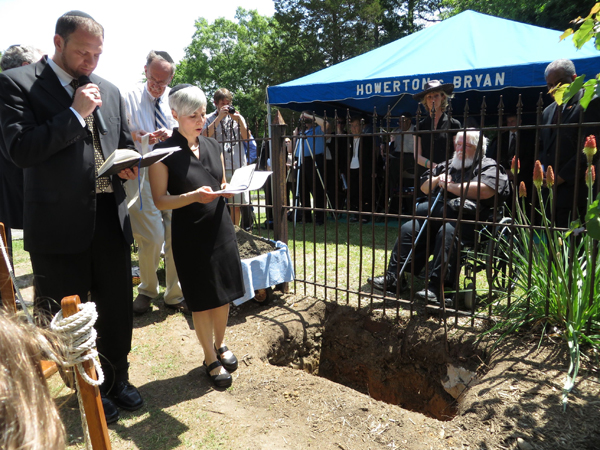 The only thing left to do was to figure out a final resting place.

Cremation is forbidden in Judaism, and most Jewish cemeteries will not inter ashes. But there are exceptions, especially for people cremated against their will. In this case, the local rabbis agreed burial might be the best solution.

For Sunday’s ceremony, a member of Beth El Synagogue built a plain pine box with a Star of David to contain the ashes. After it was lowered into the ground, mourners were invited to form a line and throw a handful of dirt into the grave.

The Jewish mourner’s prayer, the Kaddish, was recited. Afterward people walked up to Joseph Corsbie’s wheelchair and thanked him for his efforts to find a dignified home for the ashes.

Sharon Halperin arranged for a temporary laminated marker telling the story of the ashes. But there are already plans for a permanent marker, maybe even a monument.

“Now that the ashes are part of the Hebrew cemetery it will remind people that buried here are ashes of Jews murdered in Dachau,” said Kossoff. “We need all the reminders we can get.”