Former President Jimmy Carter during a book signing at The Washington Post on March 26, 2014, for his new book, “A Call to Action: Women, Religion, Violence and Power.” Religion News Service photo by Adelle M. Banks

As he nears 90 and the twilight of his public career, scholars are taking yet another look at Carter, a Baptist Sunday school teacher who continues to find ways to use his four years in the Oval Office as a springboard for his faith-fueled passions.

In many ways, Carter appears to be seeking redemption for a presidency that is widely considered a failure, from the energy crisis to the Iranian hostages to his self-diagnosed “crisis of confidence” that overshadowed America in the late 1970s.

But ironically, the Nobel Peace Prize winner is now more free to pursue his global crusade than he ever was as president, says Randall Balmer, author of the new biography, “Redeemer: The Life of Jimmy Carter.”

“Religion always functions best at the margins of society and not in the councils of power, and I think Jimmy Carter’s career illustrates that beautifully,” said Balmer, chair of Dartmouth College’s religion department and a noted scholar of American evangelicals.

“He doesn’t have to worry about getting the approval from Congress on an initiative in Africa on river blindness. He’s not tethered by political considerations any longer.”

Perhaps it’s the age of Obama that has prompted a reassessment in some quarters of the ex-president with the wide toothy grin, when progressive Democrats like Carter and Lyndon Johnson are cast in a softer, more sympathetic light. Or maybe it’s growing nostalgia for a distant era when politics seemed more decent, less dysfunctional. Or maybe it’s because Carter just won’t slow down, drawing praise for his humanitarian work even from his critics.

Whatever it is, the former peanut farmer is getting a second look — and drawing his own share of headlines. 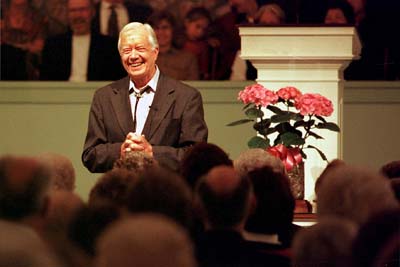 Though unsuccessful in securing ratification of the Equal Rights Amendment as president, Carter has emerged as an advocate against the abuse of women across the world. From the chair next to late-night talk show host David Letterman to the halls of the Lyndon Baines Johnson Library, he can discuss the intricacies of female genital mutilation and the high rates of sexual abuse of women at universities and in the military.

“I have become convinced that the most serious and unaddressed worldwide challenge is the deprivation and abuse of women and girls, largely caused by a false interpretation of carefully selected religious texts and a growing tolerance of violence and warfare,” Carter wrote in his new book, “A Call to Action: Women, Religion, Violence and Power.” 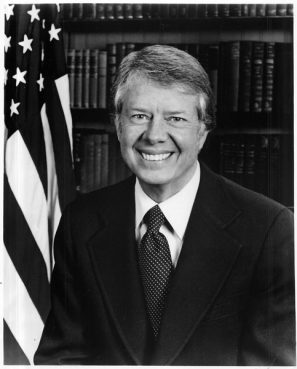 Carter, of course, is no stranger to religious controversies. He famously broke ties with the Southern Baptist Convention after it called for women to submit to their husbands and not be pastors. Men who feel they are superior to women, he said, can find a Bible verse “here or there” that might legitimize their belief.

But he prefers to focus on the example of Jesus.

“It would be a fruitless search to look through the Scriptures and find one single instance where Jesus did not treat women either equal or superior to men,” he said at a recent forum at The Washington Post.

“There’s this strong head and heart in him,” Leonard, professor of church history at Wake Forest Divinity School, said of Carter. “He’s very realistic. He’s very direct about what he thinks should be done, but underneath that is what I would call this Baptist progressivism.”

Timothy George, dean of Samford University’s Beeson Divinity School, was sorry to see Carter leave the SBC and thought his emphasis on the differing views on women was “out of proportion.” But George, one of the more conservative Baptists who agreed to meet with Carter before he left the SBC, respects the former president for his attempts to bring Baptists together and his efforts to eradicate overlooked tropical diseases such as Guinea worm.

“He’s done so many wonderful things in his humanitarian role, which grows out of his faith,” George said of the projects promoted through the Atlanta-based Carter Center.

Carter also has not given up on his belief that Baptists can bridge racial and theological divides for the common good. Working with the Atlanta-based Cooperative Baptist Fellowship and other Baptist groups, this summer he will highlight “covenants of action,” the next stage of the New Baptist Covenant he began almost a decade ago. So far, there are five pilot interracial projects of Baptists from local congregations from Georgia to Texas working on issues such as predatory lending and literacy.

The people who share Sundays with him at his home church in Plains, Ga., say none of Carter’s current work strays from the faith he has long embraced. 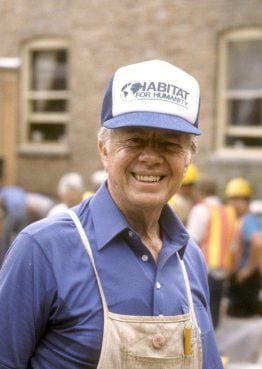 Former President Jimmy Carter appears during the 1986 Jimmy and Rosalynn Carter Work Project, which was held in Chicago, where volunteers helped build a four-unit townhouse. Photo courtesy of Habitat for Humanity International

“What he teaches on Sunday he lives seven days a week,” said Jan Williams, a member of Maranatha Baptist Church, which attracts hundreds of visitors when the former president is in town — and just dozens when he’s not.

“I don’t see someone who has sort of a compartmentalized faith, where sometimes you see it here and then you look and, well, it’s not there,” the pastor said.

This fall in the Dallas area, just days after Carter’s 90th birthday, he and his wife, Rosalynn, intend to lead their 31st “build” with Habitat for Humanity, the Christian nonprofit that constructs homes with people in need of affordable housing.

“He doesn’t lack so much for passion as he does for respite after all these years,” said Balmer. “I think he has redeemed himself and yet he continues to push himself.”