VATICAN CITY (RNS) A Vatican spokesman said it’s premature to suggest a gathering between Catholic and Orthodox faiths to mark the 1700th anniversary of the first church council held in Nicea in 325 A.D.

Despite cordial meetings between Pope Francis and Ecumenical Patriarch Bartholomew of Constantinople during the pontiff’s visit to Jerusalem in May, the Vatican has rejected media reports that a 2025 event had been confirmed.

“Several news agencies, publications and individuals have reported on this gathering as a fait accompli,” said the Rev. Thomas Rosica, a Vatican spokesman, in a statement.

“No formal announcement of or convocation of this event has come from the Vatican. It is very early to jump to conclusions.”

The two faiths have been estranged for 1,000 years but hopes for a reconciliation have grown since Francis and Bartholomew, the head of the Orthodox Church, prayed together during the pope’s three-day trip to the Holy Land.

One of the primary reasons for Francis’ visit was to mark the 50th anniversary of the significant meeting between former Patriarch Athenagoras and Pope Paul VI in Jerusalem.

Bartholomew is reported to have told Asia News: “We agreed to leave as a legacy to ourselves and our successors a gathering in Nicea in 2025, to celebrate together, after 17 centuries, the first truly ecumenical synod.”

Nicea, now known as Iznik, is in northwestern Turkey. In 325, Emperor Constantine met more than 300 bishops from the Eastern and Western traditions there. Bartholomew hopes this will be repeated in 11 years’ time. 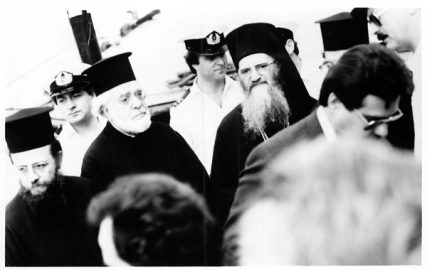 Archbishop Iakovos, second from left, of the Greek Orthodox Archdiocese of North and South America, accompanies the Ecumenical Patriarch of Constantinople, Demetrios I, as they make their way to the ship which carried them to Patmos, Turkey, in 1988. Religion News Service file photo

Nicea was one of the most important councils in church history and a commemoration would be desirable if “fears and suspicions created by historical experience” could be overcome, said the Rev. Tom Reese, a Vatican expert and journalist.

“Not only will the meeting be significant if it brings together Orthodox and Catholics, but the study and discussions leading up to it will lead to greater understanding and reconciliation,” he said.